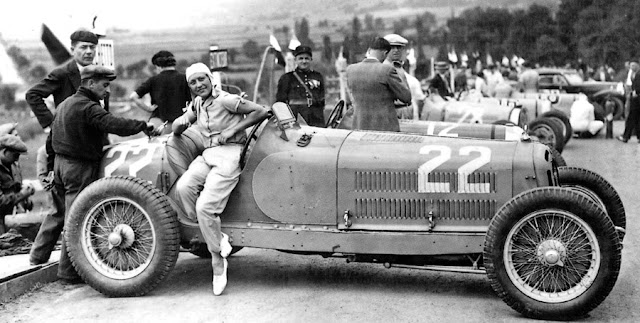 One of motorsport's brightest characters is now once more in the public eye, thanks to a recent biography by Miranda Seymour. Mariette Hélène Delangle, as she was christened, never did anything by halves, and was racy in every sense of the word. After escaping her dull, provincial home village she earned a living as an exotic dancer and occasional nude pin-up in 1920s Paris. When dwindling audiences put an end to that, she re-trained as a circus acrobat, as this required less rhythm, and wowed the crowds by performing the splits on a high wire. She only took up motor racing full time when a skiing accident put paid to her performing career.

However, her motorsport activities began before that. While still dancing, she started entering celebrity races, which were popular in France at that time. The "Championnat des Artistes", held every year at Parc des Princes, was the biggest of these, and attracted stars of stage, radio and screen in wheeled contest.

Her first experience in more mainstream motorsport was in 1928, when she entered the Journée Féminine de l'Automobile at Montlhéry, driving a Citroen, which she also entered into the Concours d'Elegance. She is said to have been inspired to take up motor racing by watching Charlotte Versigny's performances in races and rallies, in a Talbot.

After her final injury in 1929 she was lent a Bugatti T35, and won every race she entered in the Championnat des Artistes. This was followed by a run in an Omega Six in the Journée Féminine de l'Automobile. She entered both the Grand Prix and Championnat races, winning the Grand Prix after finishing last in the Championnat. After this race Hellé Nice decided that she would compete on the major race circuit, and began a regime of physical training in order to strengthen herself for the rigours of high-speed competition, long before this was common practice.

Back in the Bugatti T35, she began her professional career with a speed record attempt at Montlhéry, where she set a new Ladies' Record before crashing. Her exploits were now big news, and she embarked on a tour of the USA, sponsored by the Williams Morris Agency. Driving a Ford V8, and other borrowed cars, she entered invitational races, and attempted speed records on dirt and board ovals across the country. A big accident eventually sent her back to France, and she would later describe her American experiences as some of the most frightening of her life.

Back home in 1931, she returned to her faithful Bugatti and entered some French Grands Prix. She was seventh at Dieppe, ninth at Comminges and seventh in the Circuit du Dauphine in a Bugatti T37 voiturette. In 1932, she competed around Europe in the T35. She was eighth in the GP d'Oranie in Italy and was the fastest lady at the Mount Ventoux hillclimb. Germany's Klausen hillclimb only gave her the "Second Lady" prize behind Emma Munz. Hellé Nice, who was fiercely competitive, was not happy with this, and caused quite an unpleasant scene.

Back to the track in 1933, Hellé was ninth in the Marseilles GP, her last race with the T35. Later in the year she acquired an Alfa Romeo Monza, which she had painted in French racing blue. With her new car she drove in the Pescara 24 Hour road race and was ninth in the Italian GP. This was another in a long series of lucky escapes for Hellé, as many drivers crashed and two were killed. She also did some rallying in a Bugatti. With a Mr Bonnet as her navigator, she tackled the Coupe Internationale des Alpes, although they missed out on an award.

1934 was one of her busiest years. She was due to compete in the Casablanca GP but withdrew after the death of Bruni d'Harcourt, a racing friend and rival. In the Alfa Monza she was seventh in the Picardie GP, eighth in the Comminges event and seventh at Alger. She was seventh in a heat of the Vichy GP and failed to reach the final, but drove better at Dieppe, coming fifth in her heat and seventh in the final. The Eifelrennen at the Nürburgring was her only major non-finish of the year. In hillclimbing, she was second in class at Mont Ventoux.

The following year was also a good one. Hellé was very famous by this time, and a number of her odd habits were commented on. She wore driving overalls with decorative bows, and apparently always drove with her mouth open, to the amusement of some. Nevertheless, she was improving as a driver. In the Alfa she was eighth at Pau, an excellent fourth at Picardie, sixth in a heat of the Biella GP and seventh at Comminges. She failed to finish at Penya Rhin. She continued to be a capable hillclimb driver, and was second in the 3000cc class at Latourne.

1936 also began well. Renewing her acquaintance with Ford power, Hellé won the Coupe des Dames in the Monte Carlo Rally, navigating for Marie-Jeanne Marinovitch, in a Matford. A disappointing crash in the Pau GP put her out for a while, but towards the end of the year she decamped to South America to sample the Grand Prix scene there. She was eighth in the Rio GP, a street race, against experienced rivals.

During the following year's São Paulo GP, tragedy struck. On a tricky section of the course, Hellé swerved to avoid a marshal and went straight into the path of a straw bale, thrown by a member of the crowd for reasons best known to themselves. The Alfa crashed heavily and threw its driver out of the car. She fell onto a male spectator who was killed, along with two others. Hellé Nice was seriously injured and in a coma for a while. This was the end of her Grand Prix career.

However, it was not the end of her motorsport career. Hellé did not give up easily, and was attempting speed records again by the end of 1937, as part of the Yacco Oil all-female team with Claire Descollas, Simone des Forest and Odette Siko. The following year she took to rallying again, in a DKW owned by Huschke von Hanstein.

Later, in 1939, she entered a ladies’ one-make championship for 750cc Renault Juvaquatres, and achieved some good results, including at least one win. However, these results have proved hard to find.

After the end of the Second World War, Hellé was ready to race again. Unfortunately, tragedy of a different kind struck. In 1949 she was accused of having been a Gestapo agent by Louis Chiron, a respected French driver. The claim was never substantiated and she eventually cleared her name in court, but mud sticks, and she was ostracised by the motorsport community, no longer a big media draw.

She did attempt to carry on racing for a while; she navigated for her former rival Anne-Cécile Rose-Itier in the 1950 Monte Carlo Rally, but they crashed their Renault 4CV early on.

Her last race was in 1951, when she failed to finish the Nice GP in another 4CV. After that she became rather reclusive, and lived in obscurity with the aid of a charity for retired actors. Sadly and unfittingly she died in poverty in 1984, largely forgotten in Europe but not in South America, where "Hellenice" or "Elenice" was a popular girls' name for many years.