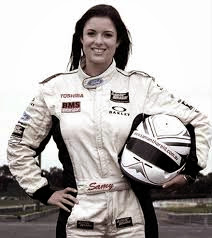 Samantha races single-seaters in Australia. After a long career in karting, from the age of eight, she began in Formula Ford in 2004, in her State's championship. She was 17 years old.

In 2005, she moved up to National competition, but only had the budget for three races. She was ninth in her first race, and ninth again later in the season. Her other race yielded a thirteenth place.

Using the same Van Diemen RF03, she spent a whole year in the National series in 2006. She managed four top-ten finishes. At the end of the season, she was 18th in the championship. Her season was blighted by car problems, and she had to sit out some of the races after her car suffered accident damage.

In 2007, she dropped back down to State competition, for part of the season. She took part in three Australian Formula Ford races, but was out of the major points positions. Later, was called up for the Bathurst 12 Hours, as part of an all-female Holden team. Her co-drivers were Leanne Tander, Lauren Gray and Christina Orr. Their car was a diesel Holden Astra. The team was running in the top twenty after Samantha’s stint, but failed to make the finish. Samantha also put together the funds to enter three Formula Three races with Scud Racing, which paid off handsomely. Competing in three rounds of the Trophy class, she won one and finished on the podium in the other two.

In 2008, buoyed by her pace in the Trophy class, she moved up to the National class of Formula 3, driving for Garth and Leanne Tander’s TanderSport operation, but only managed two races. Her results were a fourth and a sixth place at Adelaide.

Despite an enthusiastic promotional campaign and support from the Australian Institute of Sport, Samantha's career hit a dip in 2008, probably due to budget constraints. She was studying engineering at university in Australia as a backup. In 2009, she took part in five National Improved Production Car races, driving a Mazda RX-7.

She returned to Formula Ford in 2010, dropping back down to National level events. These included the Phillip Island Cool Drive Formula Ford Finale, in which she scored an overall second place.

In 2011, she tried a different route into top-line motorsport: a reality TV show. Samantha was one of ten contestants in Shannon's Supercar Showdown, competing for the prize of an entry into the Bathurst 1000 with Grant Denyer's team. She did not win, but managed to raise her profile by staying on until the penultimate round. Shortly afterwards, she was offered a drive in the Aussie Racing Car series, after another driver dropped out. She was 28th out of 46 entrants. Later in the year, she drove in two rounds of the Australian Formula Ford championship, finishing thirteenth and tenth.

For 2012, Samantha signed with Dreamtime Racing for the V8 Supercar championship, as a driving coach as well as competitive racer, although she did more coaching than racing. At the start of the season, she got involved in the Red Bull Race Off, competing against the likes of David Coulthard and other Red Bull adrenalin sports personalities. She managed a fourth and fifth in a Renault Megane, despite some very rough driving by other entrants. Later in the season, she took part in three races in the Australian Swift Racing Series, in a Suzuki Swift.

Her media profile is reasonably high, and she has undertaken some motoring journalism as well as her racing. In 2013, she did some testing, but spent most of her time on media work, promoting both women in motorsport and road safety.

In 2014, she did more of the same, but had one competitive outing in an electric Nissan GT-R Nismo. She drove in a "Time Attack" at the Clipsal 500. She is now known as Samantha Zanotto.

Samantha is currently Australia's representative to the FIA's Women in Motorsport Commission.

(Image from www.samanthareid.com.au)
Posted by Rachel H-G at 14:46