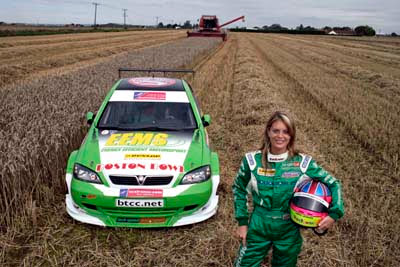 Fiona with the bio-ethanol Astra

Fiona Leggate was born into a motorsport family; her father is saloon-car racer Malcolm Leggate. However, she herself did not get started in motor racing until the relatively late age of twenty-three. Since then, she has more than made up for lost time.

After spending her teenage years in equestrian competition, Fiona won a rally driving day with former British champion Gwyndaf Evans as a competition prize in 2003. After spending the day in an MG ZR rally car with Evans, Fiona set her sights on a motorsport career of her own. She took advantage of her new-found connections with MG and entered some rounds of the MG Mayflower Trophy, an arrive-and-drive saloon series, to familiarise herself with competition driving.

After impressing many with her driving skills, Fiona found herself with a full-blown motorsport career in 2004. Assisted by MG and by sponsorship from the childrens' play centre she managed, she tackled not only another full season of the Mayflower Trophy, but the Britcar championship as well. In a 190hp MG ZR, she was sixth overall in the Mayflower Trophy, and managed to set a fastest lap at Brands Hatch. In Britcar, mainly driving a 210hp Judd-engined ZR run by the MG works team, she did even better. She was the champion of class 3 and third in the overall rankings, with an impressive run of five class wins and seven fastest laps. Her co-driver was ususally ex-BTCC driver Anthony Reid, but she was also joined by Tony Jardine and Paul O'Neill, who has been a coach and mentor to Fiona since the beginning. Remarkably, the 24-year-old Fiona achieved all this despite suffering a broken collarbone in a nasty crash at Spa-Francorchamps.

As well as her winning streak in class three, Fiona also dropped down to class four in her Mayflower car for one round, where she joined by a team of female drivers. This was only one diversion in a season full of "extra-curricular" activity; she was offered several guest drives and took the chance to try out new cars whenever it came along. She got a taste of sportscar action at Brands Hatch, guesting in two rounds of the TVR Tuscan Challenge, where she came eleventh and thirteenth. Later in the season, at Zolder, she was competing against sportscars in the 24 Hour race. She had been recruited by the Daikin team to pilot their BMW Mini, and her team-mates were Vanina Ickx, Alexandra van de Velde and Sylvie Delcour, all experienced European racers. Despite the team line-up, the car gave up on them and they didn't finish.

Back in an MG ZR, Fiona got her first taste of competitive rally action on the Lombard Revival Rally, a classic-style event based on the old Lombard and RAC Rallies. She was partnered by Tony Jardine.

Probably her most newsworthy achievement was the weekend in July where she spent a day travelling between Silverstone and Brands Hatch, competing in six separate races; a record number for one driver to take part in in a single day. She started at the Northamptonshire track with a 15th place in the MG Trophy, before jumping in a helicopter to head down to Brands, for Britcar. She was due to share her ZR with her early inspiration, Gwyndaf Evans, but he crashed the car just as she landed and she was unable to start the race. Fiona carried on and was eighth in another MG Trophy race. After a return trip to Kent, Fiona claimed her record, having raced in six events. She even scored two wins in the Abingdon Trophy and a single-driver MG Enduro, the last of the day. Her previous MG Enduro had resulted in a second, assisted by Don Kettleborough. She was also second in class in her first-ever Sprint, driving a BTCC MG ZS, and fourteenth in an MGB Trophy race, sharing Paul White's classic MGB.

2005 started in a similar vein. Fiona signed up once again for Britcar and entered an MG Trophy race at Silverstone. Using different cars, she attempted both Britcar and its sister series, Production S1. The Production car was fast enough to net her a lap record at Brands Hatch.

However, later in the year, her career received a huge injection. She joined the Leamington-based Tech-Speed Motorsport team for the BTCC. As well as a higher level of competition, she would be away from MG for the first time, driving a Vauxhall Astra Coupe. The car was converted to run on bio-ethanol, the first BTCC car to do so.

Fiona joined the championship for round 18. She made steady progress, although the car was not up to speed straight away as the team were still experimenting with the fuel mixture. By the time the Silverstone meeting came round, she was much more confident and using the tactical knowledge she had gained; she scored her best result of fifth here after capitalising on the situation wherein a pack of drivers were fighting over tenth position, hoping to win pole for the reverse grid in the next race. This was also a best-ever BTCC result for a female driver.

She did not repeat her fifth position, but kept her car on the track and consistently outpaced the Alfa Romeos on the grid. She was 16th overall and eighth in the Independents Trophy at the end of the season. Her popularity and promising results also earned her the Rookie of the Year award.

It was back to the BTCC in 2006 as Tech-Speed retained Fiona's services. The biofuel-powered car was still attracting attention, as was its driver, but the results were not forthcoming. Fiona was struggling to keep pace with the rest of the grid and often retired with technical problems. A couple of engine failures cost her whole meetings. At the beginning of September, she pulled out of the series and left the team for reasons which have never been disclosed.

In typical Fiona fashion, this was not the end of her motorsport campaign. She quickly found herself a seat in the Mini Challenge and was sixth in her first race, at Thruxton. The second race of the day resulted in a DNF, although she had started well. She stayed with the Mini and took a trip to Spa for the next meeting, coming fifth and exorcising her crash demons in the process. Despite her chequered history with the Belgian circuit, she still names it as one of her favourites. As well as the Mini Challenge, she also participated in the Dutch Supercar Challenge in the ZR. Her partner was Paul White, another old colleague. The ZR was wheeled out again for two enduro races at the Silverstone MG club meet. Driving with Mark Stacey and Rob Oldaker respectively, Fiona was fifth and seventh.

Britcar had not been forgotten either; she got back in the faithful ZR for a few rounds and lined up for her second attempt at the season-ending Silverstone 24 Hours. The team was Fiona, Rob Oldaker, Ben Jacques and Umberto Nacamuli. Despite a few problems including some crash damage, the car was running well and Fiona's stint passed uneventfully. The team were running sixth in class when an engine failure dropped them out of the race for good, at the agonisingly-late time of 22 hours.

During 2006, Fiona tested a SEAT Leon Supercopa car at Brands, with which she was very impressed, with a view to racing one in 2007. She was keen to return to the BTCC, but knew she would be racing for a different team if she comes back. In the end, it was not a SEAT but another MG that she drove in the 2007 BTCC; Kartworld Racing offered her a contract.

She raced for Kartworld at all of that year’s meetings, although car trouble meant many retirements, and stopped her from starting some races. Her season was badly affected as a result. Her best finish was a twelfth at Thruxton, well down on her previous record. She was 18th in the drivers’ standings.

As well as the BTCC, she continued her involvement with the EERC, using her 2006 MG. She entered the PS1 production series and was rewarded with four class wins, and top-ten overall finishes. Driving for a different team, she entered her third Silverstone 24 Hours in a Daniels Motorsport Honda Civic. Assisted by Malcolm Edeson, Michael Hartley and Dave Abbott, she finally recorded a finish, fourth in class. This was despite a lengthy stop following an accident.

Fiona did not return to the BTCC for the 2008 season. Early in the year, she demonstrated a Metro 6R4 at the Rallye Sunseeker in Bournmouth, but after that, things went very quiet. In January 2009 she had a baby with her then-partner, Danny Watts, which explained her absence.

Her layoff from motorsport continued until the start of the 2010 season. The Zing Trofeo Abarth 500 was her chosen championship for her comeback. She entered six races in the new Fiat 500, and scored a best finish of seventh, achieved at Cadwell Park and Oulton Park. Her other finishes were an eighth at Cadwell and an eleventh at Silverstone. Fiona admitted to finding the car difficult to drive.

She does not appear to have competed after that, and her future plans are unknown. Her website is no longer being updated.

(Image from www.fionaleggate.co.uk)
Posted by Rachel H-G at 14:16