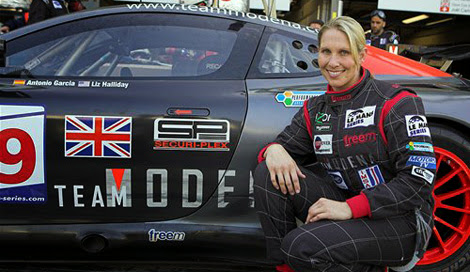 Californian-born Liz came to England in her late teens to advance her sporting career. She has been a lifelong equestrian competitor, and began motor racing as a hobby in 1997, at nineteen. Her first racing car was a Datsun 510, which she used in classic events. Over the three years she raced in it, she managed to win three times.

In 2000, whilst still only 22, she exchanged the Datsun for a more modern BMW, which she entered in the Kumho BMW Championship in the UK. Her car was a powerful M3 E30, run by Mosely Motorsport. Liz progressed steadily through the rank,s and by 2002 was good enough to be named "Driver of the Season". During this time, she also entered her M3 into the EERC/Britcar Sports series. Her best results were a first and second in class at Pembrey. She was named "Driver of the Day" at the Donington meeting.

2003 started off in a similar vein, with Liz back in the M3 in the Kumho Championship. She was really beginning to pick up speed now, and won her class at the Croft round, breaking the lap record in the process. This earned her another "Driver of the Day" accolade. At Silverstone she was second in class. Away from the main championship, she picked up a class win in Britsports at Oulton Park.

Later in the season, she switched to the British GT championship, driving a Porsche 996 GT3 for GruppeM/Tech 9 Motorsport. Her first race was at Oulton Park. Nick Stavely was her co-driver, and they were fourteenth overall, eighth in the GT Cup class for smaller cars. Stavely was replaced by teenager Tom Shrimpton for the next race, Rockingham. He and Liz proved to be a good partnership, and began strongly together with an eighth place, second in the Cup class. At Thruxton, they were eleventh and fourth GT Cup finishers, but at Spa they were triumphant, winning the GT Cup class, with help from Amanda Stretton. This was the best finish for a female driver, and also the best finish for a teenaged driver. They were fifteenth in the general classification. At the last round, Brands Hatch, they were ninth, third in class.

On the other side of the world, Liz was invited to take part in her first Bathurst 24-hour race by Ian Donaldson, a racing friend and colleague. Liz, Ian and Ian's son drove their Porsche 911 GT3-RSR to seventh place overall, an excellent maiden effort for Liz.

The heroics in British GTs and at Bathurst really kickstarted Liz's sportscar career. For most of 2004 she was based back in the States, competing mainly in the Rolex Grand Am series. She missed the Daytona 24 Hours, but completed most of the season, with some good GT class finishes. Her first race of the year was Homestead, and she and Kevin Buckler got off to a flying start, coming third in the GT class and 16th overall in their Porsche 996 GT3. At Phoenix they were 26th, fourth in class, but at Mont Tremblant they slipped to eighth, 28th in the main standings, accompanied by Bohdan Kroczek this time. The same trio could only manage a 34th (tenth GT) at the first Watkins Glen round. Back to a pair, Liz and Kevin Buckler improved their position at Daytona, with another 16th place, fourth GT, a feat they repeated at Mid-Ohio, although they were fifth in class this time. Watkins Glen proved a bit of a bogey track for Liz, as she was tenth in class there again on her second visit, 29th overall. She did not enter the final three rounds of the championship, and moved across to the American Le Mans series instead, pairing up with Piers Masarati in a Porsche 911 GT3. Their first race together was Petit Le Mans at Road Atlanta, and they were joined by Liz's previous team-mate, Ian Donaldson, for the occasion. Following gearbox problems, they were 29th, fourteenth in the GT class. Liz and Piers fared slightly better at Laguna Seca, where they were 21st and twelfth GT, despite electrical troubles.

Liz had not forgotten European competition either. Back in the UK, she came third and fourth in a Radical SR3 at a Britsports meeting at Brands Hatch. Mid-season, she raced in the Spa 24 Hours for the Autolanda team, coming fourteenth and sixth in class in her Porsche 996. Her co-drivers were Luigi Moccia and Moreno Soli, both from Italy.

Her twin attack on the USA and the rest of the world continued in 2005. She went back to the ALMS for most of the season and really improved as a driver, as part of the Intersport team, racing a Judd-engined Lola LMP2. She had a solid start at Sebring, lasting the distance with Clint Field and Gareth Ridpath, to come in 33rd, fourth in class. Due to team plans and clashing commitments, Liz did not attend the Road Atlanta, Mid-Ohio, Lime Rock or Portland meetings, although Intersport sent a car to some of them. She returned at Sonoma, and immediately got back into the swing of things, coming fourth and winning the LPM2 class with Clint Field. A fire meant that the duo had to settle for 23rd at Road America, but they bounced back at Mosport, winning their class again and coming fifth in the main classification. Joined by Jon Field, they kept up the momentum at Petit Le Mans, repeating their Mosport win and overall place. Their last race of the season was Laguna Seca, which was a disappointment, and ended in a 26th position and fifth in class.

In the middle of all this, the Intersport team decamped to France for Le Mans itself. This was Liz's first attempt at the classic Sarthe event. She, along with Clint and Jon Field, maintained a strong position in class, until engine troubles intervened and forced them out during the eleventh hour.

Liz was a very busy woman in 2005; as well as racing for Intersport and continuing her horse-riding career, she found time to contest the whole FIA GT Championship with Lister Racing. Her car was a Lister Storm GT, and her partner was Justin Keen of the UK. The car, although fast, tended to be unreliable, and Liz did not finish five of the eleven races: Magny-Cours, Imola, Spa, Zhuhai or Bahrain. However, when the car made it to the finish, the positions were normally good. Liz and Justin were ninth at Monza, unclassified at the Silverstone Tourist Trophy after problems, seventh at Brno, eleventh at Oschersleben, sixteenth at Istanbul and seventh again in Dubai. Most of the time, they were up against bigger teams, such as Aston Martin and Maserati, with their large development budgets.

2006 saw Liz concentrate on the ALMS, with Intersport. The team made a superb start to the season, with a second place at Sebring, along with a class win for Liz, Clint and Jon. They followed that up with another class win at Houston, coming eleventh overall this time. At Lexington they were a strong fourth overall, but the LMP2 cars were running well that day, and they were only third in class. The Lakeville race was not as good for Intersport; they were 17th and third LMP2. Salt Lake City was a better day; they were ninth and runners-up in class. Portland was even better, giving them a fifth position and another LMP2 win. At Elkhart Lake they were third in class, eighth overall, but after that their luck seemed to desert them somewhat. They were 19th at Mosport, 27th at Petit Le Mans and twelfth at Laguna Seca. In consolation for their underwhelming end to the year, they were second in the LMP2 team standings. Liz was third in the individual LMP2 drivers' table, and Clint Field was the winner.

Her return to Le Mans itself was eventful. The Lola suffered gearbox and engine trouble at multiple points during the race, but Liz and her team-mates managed to keep it going, and record their maiden finish. They were 19th, fourth in the LMP2 class. Liz's ambition now is to win Le Mans and she has proved herself a capable endurance driver there, as well as at Sebring.

In 2007, Liz drove in the European-based Le Mans Series for a different team. She was now competing for Team Modena, in an Aston Martin DBR9, a powerful and highly-competitive car. This year she began her season by finishing third in the GT-1 class at the 12 Hours of Sebring, eleventh overall. She was assisted by Darren Turner and Antonio Garcia. In the LMS proper, she was twelfth in her first race at Monza, with Antonio Garcia. The pair were joined by Christian Fittipaldi for the Valencia race, but could only manage 25th. Unfortunately, Liz parted company with the team after that.

She got to drive again at Le Mans mid-season, gaining a seat with Noel del Bello Racing, in a Courage-AER LMP2 car. She did not finish, as the car expired half-way. Her team-mates were Vitaly Petrov and Romain Iannetta.

For 2008, she returned to the Le Mans Series for one round. She drove a Creation CA07 AIM with Stephen Simpson, and was 22nd, tenth in the LMP1 class. Later in the season she took part in two ALMS rounds for the same team. She was 34th at Petit Le Mans after a crash, driving with Stuart Hall and Dean Stirling, and 17th, fourth in class, at Laguna Seca. She did not go to Le Mans this year and joined the Eurosport commentary team instead.

Since then, Liz did not competed actively for a while, for unknown reasons. She did not leave motorsport completely, and still did media commentary, driver training and mentoring.

In 2010, she finally made a return to the track, at the Silverstone Historic Festival. She was driving an Alfa Romeo Giulietta SZ Coda Tronca, and a smaller GTA. She won her class in the Giulietta. Later, she raced the GTA in a HSCC meeting at Oulton Park, and was tenth in her race. At the Goodwood Revival, she raced the Giulietta once more. Both cars used to belong to her father.

After a year spent concentrating on equestrianism and media work, Liz announced her return to full-time motorsport in 2012. She contested the Lotus Cup in the UK, driving a 2-Eleven. After starting in last place on the grid in her first race at Silverstone, she battled back to second in class, fifth overall. In her other races, she was unclassified at Oulton Park and Sntetterton, fourth at Brands Hatch and eighth at Donington. She was 20th overall, after missing the European rounds.

In 2013, Liz continued with her media work, and also did some more Lotus Cup racing. The first round, at Snetterton, went well: a second place overall, and class win. However, this seems to have been her only good round. At Silverstone, she qualified, but did not race, due to mechanical problems, and at Brands Hatch, she was unclassified. The story was the same at Oulton Park. She did not appear for the rest of the season.

She did not race in 2014 or 2015, although she did commentate on Le Mans for Eurosport.

As well as her ambition to win Le Mans, Liz also has high hopes for her four-legged career. She aims to win an Olympic gold medal in eventing for the USA, making her a true double champion.

(Image from www.leblogauto.com)
Posted by Rachel H-G at 14:27