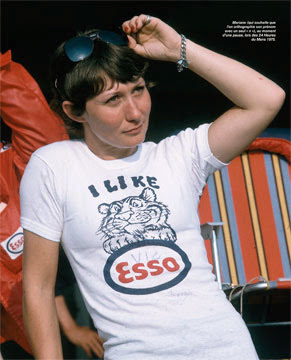 Marianne had her first taste of motorsport in 1964, at the age of 20. She had been a regular spectator before and was encouraged by her boyfriend to enter some local rallies in her own car. Shortly afterwards, the pair married, Marianne Trintignant became Marianne Hoepfner and a 20-year career had begun.

For several seasons, she stuck with local events, taking part in hillclimbs as well as rallies. Her first big result was her win in the 1969 Paris-St. Raphaël event, driving an Alpine A110. She was in the navigator’s seat this time, at the side of Claudine Trautmann.

After her Paris-St. Raphaël triumph, Marianne returned to the French scene, taking in hillclimbs in an Alpine, as well as rallies. During 1972, she became one of the second group of female Team Aseptogyl drivers, and was supported by the team in most of her motorsport activities. Quickly, she became one of the leading drivers in the team. She remained part of the Aseptogyl set-up until 1979.

Her next big entry was the Tour de Corse in 1972. She and her regular navigator Yveline Vanoni did not finish in their Aseptogyl 1600cc A110. They had better luck in Spain, picking up their first international top ten in the RACE Rally. They were seventh overall and won Group Four. The same pairing in the same car were 31st in the 1972 Tour de France, and they also entered the Rally of Portugal and the Alpine Rally.

In 1973, Marianne’s rally career really began to take off. Still in the Alpine A110, she was 34th in the Monte Carlo Rally, third in class. Later in the year, she travelled to Morocco for the first time, using an 1800cc Alpine. She did not finish, after a driveshaft broke. In May, she won the Paris St. Raphaël event, driving for herself this time. She won the first of her four French ladies’ championships this year.

In 1974, she entered the Press-On-Regardless Rally, in Michigan. It was here that she scored her second international top ten finish: a ninth place, in the A110. At home, her performances were strong enough to retain her Coupe des Dames crown.

The following season, it was time for a change. Marianne left behind the ageing A110 and replaced it with a Peugeot 504. She also gained a new navigator in Christine Fourton. One of the highlights of her rallying year was a seventh place in the Rallye du Maroc. At home, she continued to compete, sometimes using a Peugeot 304 or 309 as well as a 504. By this time, she was an established member of Team Aseptogyl, an all-female motorsport stable run by Bob Neyret and sponsored by a brand of toothpaste. Her best French result was an eighth place in the Rallye Bayonne Cote Basque, where she won her class in a 304. Probably her biggest drive of the year was her second place on the London-Sydney World Cup Rally, driving a Peugeot 504 with Yveline Vanoni.

As well as rallying, Marianne tried some more circuit racing. She was 24th in the Spa 24 Hours, driving a Triumph Dolomite with Jenny Birrell and Christine Beckers. Even more impressively, she won the 2000cc class at Le Mans, driving a Simca-powered Moynet JRD LM75. Her co-drivers were her fellow rallyists, Michele Mouton and Christine Dacremont. They were 21st overall.

In 1976, she repeated her Moroccan result, driving the 504 with “Biche” (Michele Petit) this time. She did not return to Le Mans and seems to have had a quieter year. As ever, she continued to rally primarily in France, and won the last of her Coupe des Dames this year.

She was much more active in 1977, driving a series of different cars. For that year’s Monte, she used a Lancia Stratos HF, but retired on the second stage with suspension problems. Later in the season, she returned to Corsica in a Toyota Celica, but went out early again. She had better luck driving a Team Aseptogyl diesel Fiat 131 on the London-Sydney World Cup Rally. Her final position was thirteenth.

1978 played out in a similar fashion. In the World Rally Championship, Marianne entered the Monte, the Acropolis Rally and the Tour de Corse, driving a Toyota Celica and a Fiat 127 respectively. She did not finish either later event, as the Celica’s suspension went again and all the Aseptogyl-run Fiats retired with various mechanical problems that year. She did get to the end of the Monte in a Citroen, but was in 76th position. Problems also put her out of Le Mans in the 19th hour. She was sharing a WMP P76 Peugeot prototype with Christine Dacremont and the head gasket failed.

As well as rallying, at home and abroad, Marianne returned to Le Mans. She drove an Aseptogyl-sponsored Lancia Stratos with Christine Dacremont, but their engine failed in the fifth hour.

On the WRC front, things improved slightly in 1979, if only that Marianne made it to the finish without her car self-destructing. She was 43rd in Monte Carlo, driving a Citroen CX 2400 with Marie-Madeleine Fouquet. This was her only international action of the year, although she continued to compete in the French championship.

Marianne only made one international race appearance in 1980, at Le Mans. She drove a Porsche 934 with the Almeras brothers, Jacques and Jean-Marie, but the team went out late on after damaging their car in a crash. This was her last attempt at the classic French enduro.

On the rallying side, she teamed up with Oda Dencker-Andersen in a Toyota for a couple of events. She was second in the Himalayan Rally in India, driving a Celica. Rough-terrain expert Shekhar Mehta won.

1981 marked her last WRC event, the Rallye Cote d’Ivoire. That year’s rally only had nine finishers and Marianne and her co-driver Biche were not among them. The distributor on their Porsche 924 failed on stage six. Circuit racing proved more fruitful: she was seventh overall in the Spa 24 Hours, assisted by Jean-Louis Trintignant, Derek Bell and Alain Cudini. The car was a BMW 530i run by the WM team.

In 1982 she did some more circuit racing. She drove an Opel and a BMW in touring car races at Mugello and Spa, but the results have not been forthcoming.

After that, Marianne began winding down her career and made fewer big appearances, although she continued to compete in France. Her last international event was the RAC Rally in 1984, driving a works Mazda RX-7 with Biche. Sadly, she was only a reserve driver and did not get to start.

(Image from http://www.echappementclassic.fr/)
Posted by Rachel H-G at 13:44