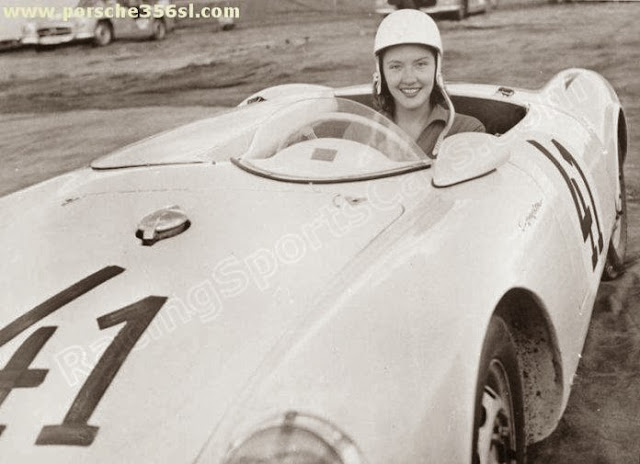 Gilberte in the Porsche 550

Perhaps one of the first in a long line of fine Belgian all-rounders (Jacky Ickx, Marc Goossens, Olivier Gendebien), Gilberte was born into a motoring family in 1928. Her father was Max Thirion, a veteran sportscar racer with Targa Florio experience.

Naturally, Gilberte moved among motoring circles too, and in her early twenties, she was the public relations officer for Champion Spark Plugs. She had inherited her father's passion for motorsport and entered her first rally in 1951, at the age of twenty-three, driving a Healey. She failed to finish the event, the Soleil de Cannes Rally, but was not put off. Later that year, she encountered an aluminium-bodied Gmünd Porsche 356SL racing special, which had won its class at Le Mans, at a motor show. She was smitten, and her father went to great lengths to buy the vehicle for her. Eventually, its owner found it too powerful for road use and sold it to Max, probably to his great relief.

The 356 was Gilberte's car of choice for the 1952 season. With her father as navigator, she entered the Paris-St Raphaël womens' rally, and was rewarded with second in class. The father-daughter pairing entered three other rallies that year. They retired from the Lyon-Charbonnieres and Alpine events, but were an excellent fifth, with a class win, in Gilberte's second Soleil de Cannes. She also teamed up with former French Grand Prix driver, Germaine Rouault, for two African rallies, the Moroccan and the 12 Hours of Casablanca, but failed to finish either. Her final competition of the year was the Tour de France, with Ingeborg Polensky, but they were disqualified. She had had better luck in her first sprint, the 1 Kilometre Flying Start at Wolvertem; 191 kph was good enough for a class record. Switching seats in her rally car, she guided fellow Belgian van den Kaart to a 125th place in the Rally of the Tulips. They were the first Belgian finishers.

1953 started very badly indeed. Driving a new Porsche 356, Gilberte crashed badly on the Paris-St Raphaël Rally, right at the end of the event, in which she had been near the front. Her injuries put her out of action for over two months. She and Ingeborg Polensky withdrew from the Rally of the Tulips, and Max Thirion took his daughter's place in the Mille Miglia. (He came second in class.)

Gilberte could have been forgiven for giving up there and then, but she was not that kind of person. In May of 1953 she entered Ingeborg Polensky's Porsche into her first race, an event for Porsches at the Nürburgring. It nearly ended in tears again when she had an excursion off track, but she impressed many onlookers by fighting back to eighth place. The following week, she and Polensky entered the 12 Hours of Hyeres and came fourth in class. Her other race of the year was the Spa 24 Hours. She and Frenchwoman Annie Bousquet drove a Fiat 1100 to sixteenth place overall, the Ladies' Cup and the King's Cup for the best Belgian finisher.

Rallying has not been forgotten. The Alpine event brought mixed fortunes for Gilberte and Lise Renaud. They scored class wins in the Monza stage and the Cannes driving test but dropped to 44th overall with a broken clutch pedal and shock absorbers. The Porsche was running better on the Moroccan Rally, in which they were eighth overall, second in class and the first lady finishers. However, another retirement beckoned for the Thirion/Polensky partnership on the Tour de France, again due to clutch and suspension problems. Again, Gilberte managed to fit in more "extra-curricular" activities. She co-drove Gonzague Olivier to a class win on the Tour of Belgium, and Helmut Polensky to thirteenth on the Sestriere Rally. Driving solo, she set another speed record, just over 201 kmh, at Jabbeke, in her Porsche.

The partnership with Gonzague Olivier continued in 1954. They won their first rally together, the Rallye des Routes du Nord, in February. They also led the Bol d'Or race at Montlhèry until their Porsche's engine failed. Gilberte formed many strong teams with other drivers during her relatively short racing career and another of these began on her second event of 1954. She and erstwhile hillclimber Nadège Washer (later Ferrier) came sixth on the Randonnée des Routes Blanches Rally in the 356. They were also fourth, with a class win, on the Soleil de Cannes.

Her other rallying exploits for that year included a series of events with former Grand Prix driver Olivier Gendebien. As his co-driver, she was tenth on the Lyon-Charbonnieres in a Fiat, and when the roles were reversed the pair did even better. They were fourth on the Evian Mont Blanc-Megève Rally and seventh on the Tour of Italy, scoring class wins both times, in a Porsche and Plymouth respectively. On their racing debut together they were fourteenth in the Rheims 12 Hours in a Gordini.

Other partnerships had not been forgotten: Annie Bousquet and Gilberte contested the Mille Miglia together in a Gordini, she and Ingeborg Polensky drove a works Porsche to top-five finishes on the Tours of France and Belgium, and Lise Renaud partnered her again in the Morocco Rally. 1954 was also a year of superb solo efforts by the Belgian. She was third on the Paris-St Raphaël, 25th on the Rally of Rallyemen and second in class in a sportscar race at Spa, in the Gordini. By far her best result was her first race win; a single-handed drive in the Porsche in the 12 Hours of Huy. The only real disappointment that year was going out of Le Mans early on, in a Gordini T17S. Her co-driver was Andre Pilette. It is not clear whether Gilberte even got to drive.

The next season started with another win in the Huy endurance race, this time in the ageing Gordini 1100. That year, Gilberte switched between this car and a devastatingly quick Mercedes 300SL, as driven by Stirling Moss. In the Mercedes, she won the 1 Kilometre Flying Start of Waterloo, the Come hillclimb, the Coppa Corallo race at Cagliari and the Stella Alpina rally, this time with Olivier Gendebien. The Gordini brought her a sixth in class in the Mille Miglia with Nadège Washer, but gave up before the end of the Bol d'Or alongside Andre Milhoux. Her only other retirement of the year came on the Agadir GP, in a Porsche 550.

At the end of 1955, Gilberte teamed up with Lise Renaud again, in a Renault 4CV. They were second in class on the Tour of Belgium and 40th (second in the under 750cc class) on the Monte Carlo Rally of 1956. Gilberte later changed to a Dauphine for the Mille Miglia and was second in class again. This year, she would drive many different cars. In between her Renault drives she was second on the Lyon-Charbonnières Rally and first on the La Roche hillclimb in two different Porsches. After her first outing in the Dauphine, she won the Come hillclimb again in last year's Mercedes. A ride in an Alfa Romeo Giulietta with Italian touring car ace Ada Pace was good for sixteenth in the Nürburgring 1000Km race, and the Italian theme continued throughout the summer. She and Anna Maria Peduzzi drove Peduzzi's Ferrari 500TR to two tenth spots in the 1000km races at Paris and Monza, but a return to the Gordini 1100 in the Rheims 12 Hours brought another retirement.

In the Swedish Sportscar Grand Prix, Gilberte and Claude Dubois were twelfth in a Porsche 550. Her final Porsche drive of the year (and her career) was an eleventh place on the Tour de France, with Ingeborg Polensky. After that, she contested two more rallies in a Renault Dauphine, winning her class on the Tour of Belgium with Lise Renaud and winning the first ever Tour of Corsica outright with Nadège Ferrier. This achievement means that Gilberte is one of a select handful of women to have won a World Championship Rally. Rightly, she was awarded the Belgian Order of Sporting Merit at the end of the year.

1957 was her last year of active competition and she only entered one race. She and Nadege Ferrier crossed the Atlantic to race their Dauphine in the Sebring 12 Hours. They came 35th, second in class. Gilberte had entered the race before in 1954 but her and Annie Bousquet's entry was not accepted. Bousquet died in a racing accident at Rheims the previous year and this was perhaps one of the reasons that Gilberte decided to call it a day. She and Annie were sometimes rivals but often team-mates, and had shared ownership of a Porsche for the 1954 racing season.

On reflection, Gilberte had the sense to bow out while still near the top, before other, younger drivers could show her up. After leaving motorsport, she raised a family in Brussels. She died in 2008, aged eighty, after serious health problems arising from Parkinson’s disease.