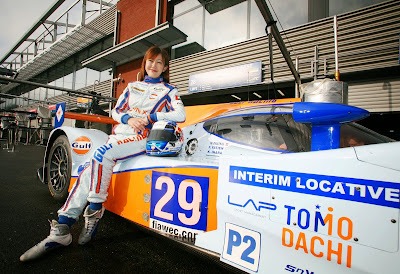 Japanese veteran Keiko had a most unusual introduction to motorsport. She had been working as a fashion model in Tokyo, and had never taken much notice of racing, until she was invited to the Japanese Grand Prix by her boss, and enlisted as a scantily-clad grid girl. However, while standing by Michael Schumacher's Ferrari, she became enchanted by its exhaust note, and became determined to race a Ferrari of her own.

She got her wish in 1999, when she got a drive in the Japanese Ferrari Trophy. Her debut year was most impressive, with three wins. Keiko now set her heart on single-seaters, and raced in Formula Toyota in her homeland for a time, before decamping to England to compete in Formula Renault. She went with her friend Takuma Sato, who was to win the British F3 title that year.

In Britain Keiko raced against some real stars, including eventual champion, Kimi Raikkonen. She was never really a front-runner, but nevertheless scored points and gained experience. For 2001 it was off to France and another step up the career ladder: Formula Three. Again, the competition was fierce from the likes of Tristan Gommendy and her countryman Ryo Fukuda. She raced for a whole season, and had a best finish of eighth, at Nogaro. Her midfield finishes left her thirteenth in the championship.

For 2002, Keiko intended to raise funds to move up another gear and contest the British F3 championship. She trained intensively to build up her upper body strength, in order to cope with the g-forces in Formula Three and beyond. During this quiet year she was invited to take part in a few Asian Formula 2000 races, a Formula Ford series. Happily, her guest appearances yielded a win and a couple of second places, bringing her back into the Asian motorsport limelight. She secured a deal with Team Yellow Hat to race in the inaugural Asian Formula BMW series. Eventual champion Ho Pin Tung of China was offered a Formula One test role following his success, which shows how well-regarded the formula is. Keiko was one of the front-runners, with a best finish of second and a whole series of podium places. She raced all over Asia and impressed many with her dogged driving style, and ability to fight back after a mishap. She also had the natural talent to qualify well, and give some famous drivers, like Ho and Marchy Lee, a run for their money. She was third in the final standings.

Perhaps one of the most well-travelled drivers on Speedqueens, Keiko was invited back to India at the end of 2003 to compete in two rounds of Formula LGB, India's own junior racing series. She won both races convincingly, to the surprise of many.

Spurred on by her excellent season in 2003, she signed up for Japan's Formula Dream in 2004. Formula Dream was a single-seater championship for aspiring F1drivers, hence the name. Despite putting in some solid performances, Keiko was not among the front-runners this time, and did not show the pace she was capable of in Formula BMW.

In May that year she made a trip back to Europe to do some sportscar racing, as part of the T2M team, in the Monza 1000km race. Sharing the Porsche 996 were Vanina Ickx and Wolfgang Kaufman. The trio failed to finish.

For the next two seasons, the focus of Keiko's racing activities was British F3. Thanks to her Japanese sponsors, she got herself a seat in the well-established Carlin team, which had strong links with the Jordan/Midland F1 outfit. As in Formula Dream, she did not manage to set the pace, and secured a string of consistent lower-field finishes instead. She was 17th in the 2005 final standings, and had a best finish of eleventh in 2006.

Despite a downturn in her race results, Keiko still harboured hopes of a Formula One drive, although she admitted that she "had better get a move on because I am old".

After the 2006 season, she kept a low profile for a while, and seems to have concentrated on other, non-motor racing projects. She returned to the circuits in 2008, in a guest drive in the Aston Martin Asia Cup at Zhuhai. This was a one-make series for Aston Martin Vantage N24 sportscars.

In 2009 she did some more sportscar racing. She appeared in the second round of Formula Le Mans, an ORECA one-make series for sportscars. She and Thomas Duchene were tenth.

After this, she took a long break from racing, and appeared to have retired, apparently due to health problems. However, she has made a comeback in 2012, signing a deal with the Middle East arm of Gulf Racing to contest the FIA World Endurance Championship, driving a Nissan Lola B12/80 with Jean-Denis Deletraz and Marc Rostan. As a warm-up, she drove an Aston Martin Vantage in the Dubai 24 Hours for the team, with Youssuf Bassil, Martin Baerschmidt and John Iossofidis. They were 50th, thirteenth in class.
Unfortunately, the car did not make the start of the first WEC race at Sebring, but Keiko was scheduled to enter the rest of the calendar, including Le Mans. She drove in six WEC rounds, finished four and had a best finish of sixth, at her old home track of Fuji. Her other results were two ninths and an eleventh, at her adopted home track of Silverstone.

Her first attempt at Le Mans was not as fruitful. The Gulf car expired after only 17 laps, before she even got a chance to drive.

Keiko's deal with Gulf Middle East continued through 2013, with the same car. She entered six rounds of the FIA World Endurance Championship, in the LMP2 class. She finished five of them, with a best class finish of fifth, achieved at Interlagos and Bahrain. This left her tenth in the LMP2 Trophy. Sadly, Le Mans gave her another retirement. Keiko, Fabien Giroix and Philippe Haezebrouck went out after only 22 laps.

Despite turning 40, Keiko's profile in 2013 was quite high, and she became a spokesperson for Nissan's Leaf electric road car. She also did some speaking on the subject of women in motorsports.

Her profile raised even further in 2014, and she had a busy calendar. Her season started with her joining the elite Larbre Competition squad, and driving their Judd-engined Morgan to 9th place, at Silverstone. This was a European Le Mans Series race, and she was assisted by Gustavo Yacamán. Using the same car, but with different team-mates, she made another attempt at Le Mans. This time, she got to the end of the race, as the ninth LMP2 finisher, and fourteenth overall. Her co-drivers were Ricky Taylor and Pierre Ragues.

In August, she stayed with the same car, but switched to the OAK Racing team. At her home track of Fuji, she won the LMP2 class in the Asian Le Mans Series, her first major win. Her team-mate was Chinese driver, Yuan Bo.

Driving for the same team, she entered rounds six and eight of the FIA Endurance Trophy. These races both ended in third place finishes, at Fuji and Bahrain.

She is hoping to continue in sportscar racing, despite saying earlier in her career that she would rather retire than abandon single-seaters! That said, she does not appear to have raced in 2015.

Keiko made one guest appearance in 2016, as an official Mazda works driver. She drove the Mazda Prototype in the 12 Hours of Sebring, alongside three regular Mazda team members. She was eighth overall.

She raced a Ligier LMP2 car at Zhuhai in October 2017. The event was the first round of the Asian Le Mans Series. She was fourth in LMP2, with Alex Au.

Larbre Competition ran the same car for her at the Fuji round of the 2018-19 WEC Superseries. She was fifth.

She is also a member of the FIA's Women in Motorsport Commission, and works to promote Japanese engineering and industry in motorsport.

(Image from Keiko's Facebook profile)
Posted by Rachel H-G at 14:13