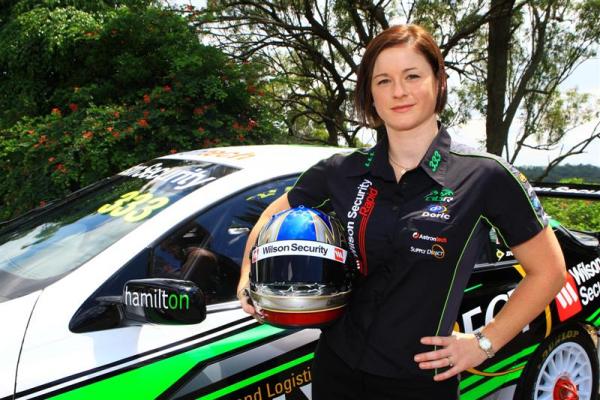 Leanne has raced in single-seaters and saloons in Australia, although she is mainly known for her single-seater achievements. After an early sporting career as a gymnast, she began racing karts seriously at fourteen, and moved into senior motorsport at 17. Initially, she took part in two rounds of the Porsche Cup in 1997, finishing second both times, but the 1998 Formula Ford championship was her first taste of single-seaters. It was a difficult season and she was 27th. However, she returned for more in 1999, and shot up the leaderboard to seventh, after some much-improved performances.

She was third in Formula Ford in 2000, winning two races. Although this was her best season to date, she made the surprising decision to jump ship to saloon racing. Her first major race was the Super Cheap Auto GT Production Car 3-hour Showroom Showdown, in which she was fourth in class E, driving a Holden Astra.

The following season, she moved full-time into the Konica V8 Supercar Series, driving a Garry Rodgers Motorsport Holden Commodore. Leanne immediately made an impact. She was second in her first race, the first woman to finish on the podium in V8 Supercars. During the year, she scored four further podium positions and was fifth in the championship. She was due to compete in the famous Bathurst 1000 endurance race, but had to pull out, after her team-mate was injured during qualifying.

In 2002, she continued in V8 Supercars, but was driving for a new team: Tandersport. Her car was a Holden Commodore once more, but a different model. This year, she did not do so well, and only entered eight races and finishing 17th in the points. The team were hampered by mechanical problems that year and Leanne often struggled to finish.

After 2002, Leanne’s funding started to dry up. For a while, she concentrated on her university studies, but after graduation, she returned to the tracks in club racing, driving her father’s Mazda RX-7. She won several races and the Interstate Challenge. Her career began to get back on track after that, and she was offered a part-season in the Australian Production Car championship in a works Daihatsu Sirion. She impressed during her first outing, and was offered two more rounds.

This led to a deal for the APCC in 2004, driving a works-supported Toyota Corolla. In the second round at Oran Park, she was first and second in her two races, another first win for a female driver. Over the season, Leanne was one of the frontrunners with a string of top-five finishes. She was third overall, and first in class.

For most of 2005, she returned to club saloon races in the faithful Mazda, but towards the end of the season, she took her first steps into Formula Three; her first single-seater competition since 2000. She contested six rounds of Australian F3 for Garth Tander Racing, run by her partner. Her best finish was third, and even with her shortened campaign, it was still enough for seventh in the championship.

Alongside Garth Tander, and driving for their team, she moved into Formula Three full-time in 2006. Although she did not manage a win just yet, she finished on the podium twice and started from pole once. She was fifth overall.

Her first win came in 2007, and it was followed not long after by another win. Over the course of the season, Leanne achieved ten further top-three positions, four pole positions and three fastest laps. She was a close second overall in the final standings, behind Tim Macrow. As well as her heroics in the Australian F3 championship, she also found time to travel to New Zealand for the Toyota Racing Series, where she was 17th overall.

The wins continued in 2008 - five in all, and she was in line to win the championship, until her engine blew in the last round. She had to content herself with another runner-up spot. The wins came at Oran Park, Mallala, Eastern Creek, Phillip Island and Symmons Plain. Apart from one retirement at Symmons Plain, she only finished out of the top five once, at Adelaide early in the season.

Away from F3, she kept her hand in in saloon racing and accepted a drive for the Bathurst 12 Hours with the Conroy team. Alongside Terry Conroy and Leigh Burges, Leanne piloted the team’s Honda Integra to 13th overall, and second in class F.

In 2009, she moved back into V8 Supercars. She spent most of the season in the Development Series, driving a Ford Falcon for Wilson Security Racing. The car had been liveried in pink and attracted some attention. Her season was an up-and-down one, with a best finish of eighth at Sandown. However, this seems to have been her only visit to the top ten this year. Her next-best result was eleventh at Queensland. She was 20th overall in the championship, which must have been something of a disappointment. The three races she contested in the main V8 Supercar Championship yielded only 18th, 19th and 27th. On a happier note, Leanne’s brief return to the National class of Australian F3 gave her a pair of wins from pole, at Phillip Island.

In 2010, she stuck with touring cars. For part of the season, she raced a Ford Falcon XA GT in the Australian Touring Car Masters. The car was built in 1973 and was run by McGrath and Wilson Security Racing. She was fifth in the championship. As well as the historic outings, she took part in a few V8 Ute races. A planned Honda Integra drive in the Bathurst 1000 with Conroy Motorsport gave her a thirteenth place, second in class, assisted by Terry Conroy and Gerry Burgess.

In 2011, Leanne discovered she was pregnant, and sat out the season. After the safe arrival of her daughter Scarlett, she set about returning to the track, and drove in a club event in a Mazda RX-7 at a club event in November. She finished seventh and second. In April 2012, she made a brief comeback in the Philip Island 6 Hours, driving a HSV VXR with Ryan McLeod in Class C.

Further into 2012, she found she was pregnant again, and was not be able to race again until mid-2013. She made a low-key return to motorsport, contesting the Victoria State Formula Ford championship. She was 19th overall, after completing five races.

She won the Australian Formula Ford series outright in 2016, with five race victories and seven additional podium places, plus two pole positions and a fastest lap, at Phillip Island. She was driving for the Sonic Motor Racing Services team, and had a female team-mate, Courtney Prince, for part of the season.

When her FF commitments allowed, she also drove for Neal Bates's team in the Toyota GT86 one-make series. Her best finish was eighth, at Winton, and she was twelfth in the championship.

On the single-seater side, she took a step down in 2017, contesting the Victorian FF1600 championship. Despite only doing five of the fifteen races, she was fifth in the championship. Four of those races resulted in wins.

She did some more GT86 racing too, making a guest appearance for the Mount Panorama rounds and earning a best finish of fourteenth. In February, she had been at Mount Panorama for the Bathurst 12 Hours, driving a Mazda 3 with Nicholas Rowe and Gerard McLeod. They were 30th overall and seventh in the Invitational class.

2018 was more of the same: guest appearances in a number of different series. She started out with the Adelaide rounds of the Australian Porsche Carrera Cup, then did some more GT86 races not long after.  Her best outing was the Victorian Formula Ford championship, where she won three races from three starts, one from pole. Her car was a 1994 Van Diemen.

The Australian TCR series beckoned in 2019. She drove an Audi RS3 run by Melbourne Performance Centre, as team-mate to Garth. Her best finishes were two eighth places at Phillip Island and The Bend and she was fourteenth overall.