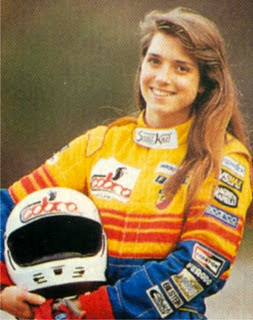 Priscille in her Fiat days

To anyone who follows fashion or watches French TV, Priscille is an ex-model and TV presenter. To rally fans, she is known as Francois Delecour's partner and gravel noter, and driver in her own right.

Her story starts before she met Delecour. Until the age of sixteen, she trained as a gymnast. It was only while she was studying at college that she became interested in rallying. A friend who worked for Fiat France tipped her off about a new one-make series for the Cinquecento they were organising, and Priscille signed up in 1992, much to her parents' disbelief. She started as a complete novice, but in 1994 she won the Cinquecento championship. This shocked some observers, especially as Priscille was now a catwalk model as well as a rally driver. As well as her Cinquecento win, she drove in her first World Championship rally in 1994, finishing 34th in the Tour de Corse.

The Cinquecento series' prize was a Fiat works drive in the French championship. This meant that Priscille also took part in two World Championship rounds, Monte Carlo and Corsica, and finished both. She was 56th in Monte Carlo and 31st in Corsica. Assisted by Sophie Betrenas, she was also 28th in the Rallye Mont Blanc-Morzine.

After her first year as a works driver she was signed by Peugeot in 1996, where she remained for two seasons. She scored some good finishes in French national rallies and drove in the Tour de Corse both years. In 1996 she came a career-best eighteenth, but retired the following year. As well as the WRC, Priscille was an impressive seventh in the Rally Mont Blanc-Morzine in 1996. She also took part in the Rally du Touquet, but I have been unable to track down the result. In her second year, she was thirteenth in the Mont Blanc event and retired from the Rallye Antibes Rallye d’Azur. Her car during her time at Peugeot was a 106 Maxi, and her co-driver was Laetitia Jourdan.

For 1998, she signed as a development driver for Ford's Puma rally project, alongside former world champion Stig Blomqvist, which took her to another world rally in Catalunya, and also to Ireland's popular Lurgan Park tarmac rally. By this time she had met Delecour and started making gravel notes for him on WRC rounds. This meant she got to drive all of the World Championship stages and report back on their condition. For Priscille it was a different but equally demanding challenge, and meant she could travel with her partner.

Her last competitive outing was the 1999 San Remo Rally, where she drove the Puma but retired. That year, she had also retired from the Catalunya Rally. She continued as a gravel noter and test driver for Ford, then Mitsubishi, until 2002. Francois Delecour has now retired from full-time competition, but still appears occasionally in historic events, sometimes with Priscille as his navigator. She still works in TV, as a stunt performer as well as a presenter. More recently, she has taken up competitive duathlon.

In 2016, Priscille and Francois swapped seats for the Balagne National Rally. Priscille was nineteenth, second in class, driving a Renault Clio. Striking out on her own again, she took part in the 2017 Rallye du Var in a Citroen Saxo, navigated by Valerie Closier. They were 64th and second in class.