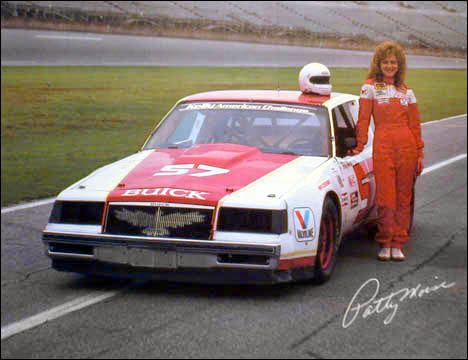 Patty with her Buick

One of the First Ladies of NASCAR, Patty has several "firsts" under her belt. At Road Atlanta, in her first NASCAR Busch Series attempt in 1986, she became the first woman to lead a Busch Series race. This came shortly after she won a qualifying race, another female first in NASCAR. She took part in 133 Busch Series races during her twelve years of NASCAR competition, 24 of which were in 1990.

Daughter of a racer, Patty started competing in 1981. First she raced sportscars like her father, and drove in IMSA. Her first entry was in 1981, when she was listed as a driver with her father in the Daytona 24 Hours. They did not get to drive. In 1983, she entered two races. She did not finish the Sebring 12 Hours in a Camaro, but was thirteenth in the Paul Revere event at Daytona. Her co-driver was Tommy Riggins, and the car was a Chevrolet Monte Carlo. In 1984, she drove a Chevrolet Camaro with Tom Ciccone at Watkins Glen. They were 27th. In 1985, she was ninth in the Sebring 12 Hours, using a Pontiac Firebird, with Les Delano and Andy Petery. She had been set to drive in the Daytona 24 Hours with Juan Manuel Fangio Jr and Robert Johnson in an Osella, but they were prevented from starting. In 1986, she and Delano were 12th at Sebring, driving a Chevrolet Camaro with Jeremy Nightingale.

Not long afterwards, she moved into the oval stock car scene. She quickly progressed through the junior series and actually made five Winston Cup starts between 1987 and 1989. However, it was in the second-ranking Busch Series that she really shone. Her results were mixed over the nine years she raced; her best finish was seventh at Talladega. This superspeedway was the scene of several of Patty's triumphs. In 1988 she qualified on pole for a Busch race, the first woman to do so. Two years later she broke the lap record there, with a brilliant 217.488 mph run. She also broke the qualifying record at Atlanta in 1995.

Her first Busch season was 1986. She qualified third for her first race at Road Atlanta, but could only manage 30th in the race itself. Her second race, at Carolina, panned out similarly. She led the race at one point, but dropped down to 34th by the end.

In 1987, her programme expanded to twelve events. She was driving a Buick. Half of her races ended in DNFs, but she also managed two top-ten finishes. Her first Winston Cup start at Watkins Glen gave her a 34th, after a crash.

1988 was not as positive. Out of eleven starts, she failed to make the top ten once. Her second and third Cup runs yielded a best of 34th. She did not really improve the following year, with a best Cup finish of 33rd and a best Busch finish of 16th.

In 1990, she made a decent attempt at the Busch championship, but could not convert the experience to hard results. She did not make the top ten once. After 1991 and her marriage to Elton Sawyer, she scaled down her racing commitments considerably. Mostly, her racing was confined to guest appearances, with a best finish of fourteenth, at Watkins Glen, in 1992.

In 1995, her career picked up again after a seventh place at Talladega. She and Elton ran their own team in 1996, and Patty entered 18 races. Sadly, she was only 37th in the final points tally. Another race in 1997 led to a heavy crash.

Patty last raced in 1998, at Bristol, where she finished in the top ten. She now concentrates on horse-riding. As well as her records on the racetrack, she is only the second Winston Cup driver to hold a university degree.

(Image from http://stockcar.racersreunion.com/group/pattymoisefans)
Posted by Rachel H-G at 14:23