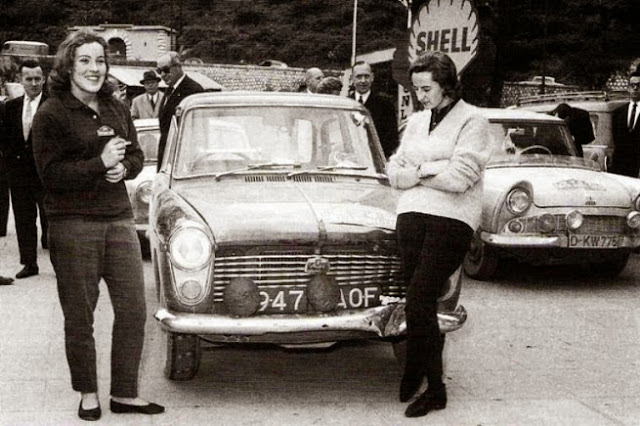 A young Pat, with Ann Wisdom (Image from www.carthrottle.com)

One of Britain's most successful rallying stars in the 1960s, Pat had motorsport in the blood; her brother is none other than Stirling Moss, her father raced at Brooklands and Indianapolis, and her mother was a rally driver in the 1930s. Surprisingly, horses were Pat's first love, and she scored well in major showjumping competitions, before turning to cars. For a long time, she combined her showjumping with motorsport, using the money she won with her horses to finance her cars.

Pat's motoring career began when her brother's manager, Ken Gregory, asked her to navigate for him on a road rally in 1953. Not long after, she was rallying a Morris Minor of her own in British events. The Minor is a car of which Pat remained fond. Her performances led to the offer of a works drive for MG in the RAC Rally. For the next five years, Pat and her navigator Ann Wisdom competed around Britain and Europe for BMC, collecting some good results. Ann Wisdom was a friend from showjumping, the daughter of Brooklands racewinner Elsie "Bill" Wisdom.

To begin with, she entered club rallies and British championship events. Her normal car was a Triumph TR2 or the Minor. She was a regular top-ten finisher in a wide variety of rallies in 1954, often held by the Harrow Car Club.

Their first season of international competition was 1955. Pat retired her MG Magnette from the Tulip Rally with lubrication problems, and drove a TF in the RAC Rally. The TF was her first works car, lent to her by BMC. She had been in talks with Triumph, but they decided not to back her.

The following year, Pat entered the Monte Carlo Rally as part of a three-woman team in an Austin Westminster, with Joan Johns and a Miss Riche. They crashed out. Back with Ann Wisdom, she finished the RAC Rally in an MGA 1500. On the Liege-Rome-Liege the following year, they pedalled the Morris Minor to 23rd overall.

In 1958 the pair really started to excel, with fourth places in the RAC and Liège-Rome-Liège rallies. Their cars were a Morris Minor and Austin-Healey 100/6 respectively. In the Minor, they crashed out of the Monte, but in the Healey, they were tenth in the Alpine Rally, with a Coupe des Dames. In an MGA, they made the trip to Sweden for the Midnight Sun Rally.

Their highlights of 1959 were a second in the German Rally in an Austin-Healey 3000 and a creditable tenth on the Monte Carlo Rally, with a Coupe des Dames, in an Austin A40. In the Healey, they crashed out of the Acropolis after hitting a lorry, and also retired from the Tulip Rally. The A40’s gearbox also gave up on the Alpine. Using a Morris 1000, they managed to finish the RAC Rally, and they drove a Riley 1.5 in Sestriere.

In 1960 they scored their first win in style, which must have been a relief after the many retirements of 1959. The Liège-Rome-Liège was one of the most punishing marathons on the European calendar and the Austin-Healey 3000 BMC's most brutal car, famously difficult to control. The combination did not faze the two British ladies, and Pat drove to a commanding victory. It was not their only strong finish of the year: Pat achieved her second Monte Carlo Coupe des Dames in an A40, finishing 17th, and was eighth, first in class, on the Tulip and Geneva Rallies. She was second on the Alpine Rally and won a Coupe des Alpes to boot. She also finished the RAC Rally, but somewhat down the leaderboard. Her car for all of these events was the big Healey.

1961 was a much quieter year, with just second places on the prestigious Alpine and RAC rallies as highlights. During the year, she drove an Austin-Healey Sprite, Austin A40, big Healey and Mini, unfortunately to a string of lowly places and retirements. One of these was a guest drive on the Welsh Rally, with Stuart Turner.

1962 was a dramatic time for Pat. After an indifferent Monte in a Mini, she accepted a one-off Saab works drive. She finished third on her first visit to the East African Safari Rally, but faced terrible news when she got home. Stirling Moss had been seriously injured at Goodwood. A very worrying time ensued, but once her brother was out of danger, she jumped back into her BMC Mini and won the Tulip Rally. Another upheaval then came when Ann Wisdom decided to call it a day, in order to marry and start a family. Again, Pat bounced back, hiring erstwhile driver Pauline Mayman to navigate. The new pairing won the Baden-Baden Rally in Germany, in a Mini again. Pat always claimed that she loved the Mini while she was driving it, but feared and hated it when she wasn't in it. Reunited with the big Healey, Pat and Pauline were third on the Alpine Rally, second in Poland, and third on the RAC. In the Mini, they were third in Geneva.

Pauline returned to the driving seat for BMC in 1963. Pat worked with a number of navigators in 1963, including a brief reunion with Ann Wisdom, now Ann Riley, on the Safari. Pat was now driving for Ford. Her tenure there started inauspiciously, with a big-end failure on the Monte in an Anglia, and an accident on the Safari in a Cortina. Driving with Jennifer Nadin, she won the Coupe des Dames on the Tulip in a Cortina, but was out of the top ten. She was also out of the top positions on the Alpine, and finished behind Pauline Mayman. The story was similar on the Spa-Sofia-Liège. Her season picked up in Greece, where she was sixth and first lady on the Acropolis, and she was seventh on the RAC Rally.

1963 was another year of upheaval for Pat, but a happier variety this time. In June she married Swedish multi-champion Erik Carlsson, and the couple became team-mates at Saab in 1964, where Carlsson had been the leading driver for many years. Pat already had a relationship with Saab going back to 1960; when BMC did not send an official entry to a big rally, she would make a guest appearance in a Saab 96. The 1962 Safari was the best of these runs, despite the shock that awaited her at the end.

The Saab 96 gave Mrs Moss-Carlsson third places on the Acropolis and Polish rallies, and a fifth on the Monte. With Liz Nystrom as navigator, she was fourth on the Spa-Sofia-Liège and RAC events. Late in the season, she was seventh in Geneva. She also finished the East African Safari and was sixth on the Tulip, the first woman home. She retired on the Mont Ventoux stage of the Alpine. For a change, she competed in the Targa Rusticana road rally back home in England, in a one-off works Ford drive. She and navigator David Stone brought their bright yellow Anglia home to another victory.

Continuing at Saab for a second year, Pat scored an impressive third on the Monte, with Swede Ursula Wirth-Fernstrom, and a second in San Remo, with the experienced Englishwoman, Val Domleo. However, the rest of her season was largely disappointing. She was out of the top ten in Sweden and retired on the Safari, 1000 Lakes and Acropolis rallies. Mid-season, she was fifth in the Gulf London Rally and in Poland. In addition, she was tenth on the RAC Rally. 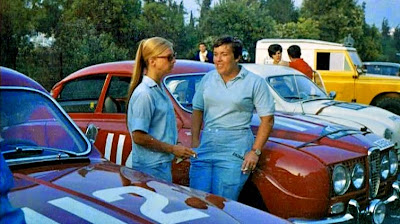 Pat and Liz during the 1965 Acropolis Rally (Image from http://www.saabsunited.com/)

In search of more wins, she hopped teams in 1966, despite beginning the season with Saab. She and Liz Nystrom retired in East Africa, their first major event. A one-off drive in a Plymouth Barracuda on the Tulip Rally gave them a Coupe des Dames, but not the outright wins of which they knew they were capable. A broken piston in the Saab dumped them out of the Acropolis, but as a consolation, they were a battling second in the Gulf London Rally. In the Rally Vltava they were fifth, and the Drei-Städte marathon event, ninth. They scored another ninth on the RAC Rally.

In 1967, still with Saab as her main team, Pat withdrew from the Monte at the start of the year, for reasons unknown. She missed out on the Rallye dei Fiori due to not having her homologation papers available for inspection. She reappeared for the Gulf London Rally, and was seventh in a V4. In the same car, she could only manage 30th on the RAC and 50th on the Tulip, despite winning the Coupe des Dames. However, she was fourth on the Rally Vltava.

A switch to the works Lancia team proved fruitful. In 1968, Pat scored her last big-time win on the Sestrière Rally, and came second again in San Remo, partnered by Liz Nystrom. They were also eighth on the Acropolis, but retired on the RAC Rally. She also got the opportunity to take her Fulvia to the legendary Targa Florio road race in Sicily. She managed a solid finish in nineteenth. Away from her Lancia heroics, she crashed out of the Safari, in a Renault 16.

1969 started well, with eighth place in Monte Carlo in the Fulvia. Later, she retired from the Safari and finished down the order in Wales. This season was a short one, as Pat gave birth to her first and only child this year. Her hiatus continued into 1970, although she was scheduled to drive for Renault again in the Total Rally in South Africa. She was open about the fact that she lost a good deal of her interest in full-time competition after becoming a mother.

Pat's career continued on and off until 1975, taking in many good placings and ladies' awards in a variety of cars. One "later" highlight was a tenth on the Monte with Liz Crellin, driving an Alpine-Renault for the all-female Team Aseptogyl in 1972. This was one of three rallies she did for the team.

In 1974, she did some rallies for Toyota. Her final big appearance was that year's RAC. She was 28th, and won the Coupe des Dames.

After just over twenty years of motorsport, she and Erik settled down to family life in England with their daughter, Suzy. Pat’s rallying career had seen the transition from navigational to speed-based events admirably, with wins in both types. Commemorated in Corgi toy cars, she was a national favourite, not to mention part of rallying's greatest love story.