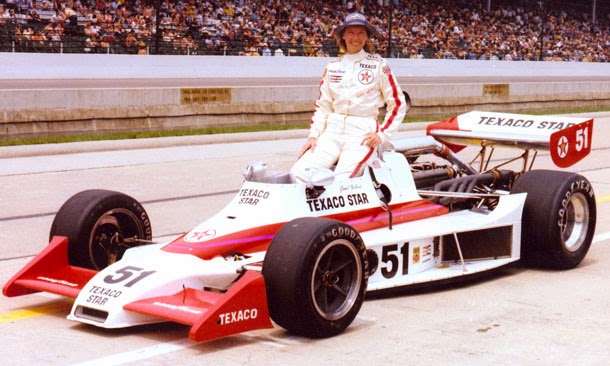 Janet Guthrie has never been one to take the easy option in life. While other girls were playing soccer or cheerleading, she was working hard towards her pilot's licence. She first flew solo at sixteen. In school she also never took the simple subjects and opted for physics and engineering, in which she gained a PhD some years later. Her earliest ambition was to become a commercial pilot; although she had the appropriate flying experience, women were not being recruited by airlines in the 1960s. She worked as a physicist in the aerospace industry instead. This led her to apply for NASA's Scientist-Astronaut programme, although she was rejected for being a woman. Her failure to be selected was one of the factors that pushed her towards full-time motorsport. The main factor, however, was sheer love of it.

After working in her chosen field for a few years, Janet acquired a Jaguar XK140 sports car and began competing in club speed events and autotests, in 1963. She used her engineering expertise to run and maintain the car herself, and although she was not an automotive engineer by trade, she learnt quickly. After a short while, she became very competitive and started entering national-level races. Her first big result was a sixth in the Watkins Glen 500 Miles in the Jaguar, in 1964. She carried on with the Jaguar until 1967. It was replaced by a Toyota Celica, which would become Janet's regular ride for some years, between 1973 and 1975. As before, she maintained the car herself, which proved a challenging job with many setbacks. It was this model that helped her to an outright win in the 1973 North Atlantic Road Racing Championships. She also used it in some Trans-Am events.

She also drove other cars during this period, including a Chevrolet Camaro in which she won her first big race, the New York 400 in 1971. The same year, she shared George Zimmerman’s Porsche 911 for the Summit Point IMSA round, but they did not finish.

She was part of two all-female sportscar teams: first the Autosport team in 1966, then the Ring Free Oil "Motor Maids". In 1966, she was 32nd in the Daytona 24 Hours, driving a Sunbeam Alpine with Suzy Dietrich and Donna Mae Mims. For Ring Free, she raced a Ford Mustang at Daytona in 1967. Her team-mates were Smokey Drolet and Anita Taylor, and they were 20th. Later she drove a Matra Djet at the Sebring 12 Hours with Liane Engeman. They did not finish. Liane and Janet were retained by the team for the 1968 Sebring race: this time, they were 32nd in an AMC Javelin. Donna Mae Mims rejoined for 1969 and they were 23rd in an Austin Healey Sprite. Janet and the Sprite returned in 1970, alongside Judy Kondratieff and Rosemary Smith this time. They were 19th and won the two-litre prototype class. Disaster struck for the team in 1971: Janet had only completed a single lap when the head gasket on their Chevron B16 went, meaning that Rosemary Smith did not even get to drive. The Ring Free Ladies’ team was disbanded after that, and Janet did not take part in any more World Championship sportscar events. She did enter another Sebring 12 Hours in 1976, when it was run by IMSA, but she did not finish. She was driving a Chevrolet Monza with Stephen Behr.

This was about as much road racing as much as her small budget would allow until 1976, when she received a call that would change her life, and hopefully the face of motorsport in the USA.

Rolla Vollstedt was a small team owner who was interested in running Janet in Indycars, hopefully as the first woman to start the Indy 500. The team's budget was not much more than her own, but she jumped at the chance. After some testing, her first race was at Trenton. Her admission to the race did not go down too well with the traditionalists at the circuit, and everywhere she raced she got a hostile reception for quite some time. However, the officials were sufficiently happy with her performance to allow her to take the Indy 500 rookie test, amid more protests. She ignored her doubters and passed the test first time, but when the time came, she was unable to qualify for the race itself. This was a disappointment for Janet and an apparent victory for the chauvinists, some of whom had deliberately misled her into holding her line against the faster cars, claiming that this was appropriate for rookies. It was not. Arlene Hiss was subjected to the same treatment earlier in the year.

It wasn't long before she was back proving herself on the ovals, in the NASCAR Winston Cup this time. She was a promising fifteenth out of forty starters at Charlotte Motor Speedway. Charlotte's circuit boss, Humpy Wheeler, wanted to bring in a female driver, having seen the popularity of Billie Jean King and her "Battle of the Sexes" with Bobby Riggs. He recruited a local banker, Lynda Ferreri, to come in as team owner, and the Kelly Girl recruitment agency as sponsor. Lynda Ferreri would run Janet's cars throughout her NASCAR career.

She returned to NASCAR in 1977 and started 19 races out of 33 in the season. She recorded twelve top-ten finishes, led her first race at Ontario and managed to qualify ninth on the grid twice, at Bristol and Talladega. Her best finish was sixth at Bristol. In her first attempt at the elite Daytona 500, she came twelfth. As well as American events, she also travelled to Australia for the Hardie-Ferodo 1000 at Bathurst. She and Johnny Rutherford did not finish in their Holden Torana.

There was unfinished business on the open-wheel side to attend to as well in 1977. Janet attempted to qualify for Indy again, driving a privately-entered Lightning. She started well, setting the fastest time on the first day, and eventually qualified 26th. It was the first time a female driver had started the race. Unfortunately, she retired on lap 27 with a broken timing gear, but she was not done with the Indy 500 yet. She came back in 1978, after forming her own team with sponsorship from Texaco, driving a Wildcat. Qualifying went much better this time, which was a good start, and Janet finished the race in a career-best ninth, the best-ever finish for a woman and an excellent achievement for someone with comparatively little testing time under her belt. What was more remarkable was that she was driving with a broken wrist sustained in qualifying, making gearshifts very painful. She had hidden the extent of her injury from the official circuit medics. It was now that she started to earn the grudging respect of her peers.

A part-season in Indycars followed in 1979. Janet contested only eleven Indy races in her career but made a big impact at the time. Her finish at the Brickyard gave her much more confidence and her best placing that year was fifth, at Milwaukee. Her highest qualifying position was fourth, at Pocono. On her return to the 500 in the summer, she managed to qualify fourteenth without much difficulty, but damaged pistons on lap three stopped her from repeating last year's heroics.

Due to dwindling funds, that was her last season in open-wheel competition. A couple of NASCAR races beckoned in 1980, including an eleventh-place finish at the Daytona 500, but after that, Janet went into retirement. In her autobiography, she places the date that she gave up on another single-seater ride as some time in 1983. She did return in 1985, as part of the works Peugeot sportscar team in the States, and scored one class win, but she was now concentrating on other things. By now, she was rightly lauded by the male stars of the day, such as Al Unser, as a tough and talented driver, who was much missed on the track. 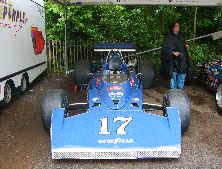