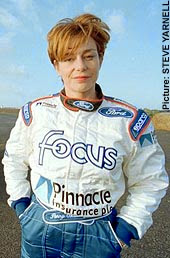 Penny is a familiar face in Britain, thanks to appearances on Channel 4's rally coverage, and numerous motoring programmes. She has not always just talked about rallying though; in 1993, this former advertising executive was British Ladies' Champion. She used her ad-making experience to put together sponsorship deals with the likes of Vidal Sassoon hair products, and managed to compete at a high level.

She has driven in the Rally of Great Britain four times, finishing twice. She first entered in a Ford Sierra in 1993, then switched to a Lada Riva for 1994. Surprisingly she finished. It was back to Ford power in 1995, but that led to retirement. After a long break, Penny and co-driver Sue Mee became the first female team to drive a World Rally Car in competition, a works Ford Focus. The rally began inauspiciously with a collision with a tree, but the British women recovered and finished 34th, with the Ladies' Cup and Journalists' Cup.

Penny is also a TV and film stunt driver and was the driving double for both "Papa" and "Nicole" in the famous Renault adverts.