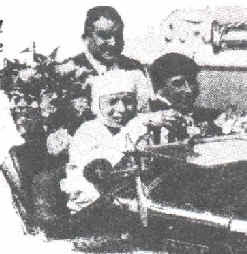 France's Odette Siko was a true pioneer of women's motor racing, and was the first lady ever to drive at Le Mans, in 1930. Not only was she the first woman to race at the fabled Sarthe circuit, she was also the most successful female entrant so far.

It has proved almost impossible to find out when Odette's first taste of motorsport occurred, but it is likely to have been during the late 1920s. Her first forays into serious competition appear to have been in 1930, when she took part in her first Le Mans with Marguerite Mareuse. Their car was Marguerite's own Bugatti T40, a 1500cc model. That year's race was a difficult one, with a high rate of attrition, but the Siko/Mareuse partnership proved to be a good one, and they finished seventh, not a bad first attempt at all.

The same car was used by Odette and Marguerite in the 1931 running of the 24 Hours. This time, they were not so fortunate. Despite reaching the end of the race in a healthy ninth place, they were disqualified for refuelling too early at the beginning. Odette herself had misunderstood a pit signal and brought the car in before the allotted time.

Both women came back to Le Mans in 1932, but with different cars and co-drivers. Odette teamed up with "Jean Sabipa", also known as Louis Charaval, in an Alfa Romeo 6C 1750. The car belonged to Odette, and she would use it in various events for the next few seasons.

The Siko/Sabipa partnership was another excellent one. In another race of heavy attrition, they managed to battle to the end and finish fourth overall, winning the two-litre class and keeping pace with the three-litre cars in front. This was the best-ever finish for a woman driver at Le Mans, a second first for Odette, and one which has not yet been beaten, over seventy years later.

Teaming up with Sabipa again the following year was not so fruitful. Although the Alfa was on the pace and running well in fifth, disaster struck on the 120th lap when Odette skidded off the circuit. Her car hit a tree, hard, and caught fire. Miraculously, she was unhurt, despite being thrown out of the car at high speed. Unbelievably, she tried to put the fire out with the aim of continuing the race.

During the period above, Odette also took part in events across France and, I believe, in the North African sportscar races which took place every year. In 1931, she won the sportscar class of the Picardie Grand Prix, and was fourth in the overall standings. She was driving a different Bugatti this time, a T43, and it may have been in this car that she won the 2000cc class of the Circuit d'Aisne in 1932. For that year's Circuit de Torvilliers, she used her Alfa, and was second in the class for sportscars up to 3000cc.

After the 1933 season, she appears to have concentrated on rallying, as a driver and also as a navigator. In 1934 she shared her Alfa with the infamous Hellé Nice for the Paris-St Raphaël ladies' rally. I have been unable to track down their finishing position. It may have been here that the pair struck up a friendship, for according to Hellé Nice's biographer, Miranda Seymour, Odette was one of Hellé's few female friends in the world of motorsport.

Odette sat beside another skilled French driver, the young Simone des Forest, in 1935. They did at least the Monte Carlo Rally together. The following year, she took the driving seat herself in the Critérium Paris-Nice, a high-speed rally popular with sportscar racers of the time. She was 86th in a Bugatti.

Her most noteworthy activity in 1937 was her participation in the Yacco Oil speed trials at Montlhéry. She was chosen as the captain of a team of four female drivers who were set to spend ten days breaking a series of speed records. The other drivers in the group, all French, were Hellé Nice, Simone des Forest and Claire Descollas. Both Claire and Simone made little effort to hide their dislike of Hellé, and Odette's captain's role was sometimes one as peacemaker as well as leader on the track.

Their car was a huge Ford-engined Mathis "Matford", with a 3600cc V8 engine. It was nicknamed "Claire" by the team, perhaps after Claire Descollas. After an abortive first attempt, during which Descollas dropped out, the crew eventually managed to set 25 records between them, driving at high speed around the Montlhéry banking in shifts for ten whole days. Ten of these records were world records for automotive endurance and fifteen were international Group C records. Some still stand today.

This was not Odette's last involvement with Matford cars; in 1939 she partnered Louise Lamberjack on the Monte Carlo Rally in a different vehicle. They were 18th, having started from Tallinn and battled their way through black ice and extremes of temperature.

Like so many of her European contemporaries, male and female, Odette's racing career appears to have been ended by the advent of the Second World War. I have found no record of her resuming it after 1945.

She is still remembered today as the highest-finishing female entrant at Le Mans and as the holder of her Yacco speed records.