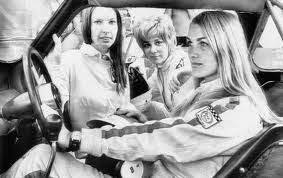 Liane at Sebring in 1969, with Janet Guthrie and Donna Mae Mims

Liane is most famous for racing in European Touring Cars between 1967 and 1972, usually in a Ford or Alfa Romeo.

She was originally a single-seater racer, and had success in Formula Vee, first in her native Holland, and then the UK. Her first year of competition was 1965, aged 19, and her car was a 1200cc racing school Formula Vee. She moved to England to further her racing career shortly after this.

She began racing saloons while in the UK, supported by Alan Mann Racing. Her first cars were smaller ones, such as Minis and Hillman Imps. In 1966, she drove in the British Saloon Car Championship, entered by “H. Wilton”, in a Mini. She entered the final rounds at Brands Hatch, but was not competitive, and crashed in her second race.

Despite this early setback, Liane stayed in the UK and continued to move up the racing ladder. She drove a variety of cars during 1967, including another Mini and a BMW-engined Elva. On the single-seater side, she competed in Formula Vee in the UK, and European Formula Three. In Formula Vee, her best finish was fourth, at Lydden Hill. In Formula Three, she drove a Brabham BT21. She did less well than in Formula Vee, finishing 19th at Zandvoort, and failing to finish at Brands Hatch.

Her greatest achievement in 1967 was her drive in the Sebring 12 Hours. She was selected for the Ring Free Ladies’ "Motor Maids" team, alongside Janet Guthrie. They drove a Matra Djet to 23rd overall, against vastly more experienced opposition.

The team returned to Sebring in 1968. They were driving an AMC Javelin this time, but did not finish. Furthermore, they were implicated in a crash by Paul Hawkins, who blamed Liane and Janet for his accident, almost entirely because of their gender. He had actually crashed with another car. This piece of publicity was embarrassing, but helped to raise Liane’s profile in the States.

As well as Sebring, Liane entered her first European Touring Car race this year. She drove a Johnny Lion-entered Ford Anglia and was fourth at Zandvoort. Single-seaters had not been forgotten either; on a trip to the Bahamas for Speed Week, she was third in the 1200cc Formula Vee race.

In 1969, she returned to Sebring for the third, and what would be the last, time. Once more, she was driving for the Ring Free Ladies’ team, alongside her regular partner Janet Guthrie, and Donna Mae Mims. They were 23rd in their Austin-Healey Sprite, and sixth in the 2000cc prototype class.

That year, she also returned to the ETCC. She was thirteenth in her first attempt at the Spa 24 Hours, driving an Alfa Romeo Benelux-run 1750 Berlina, with Bob Wollek. They won their class. As well as her European outing, she took part in three British Saloon Car Championship races in a DJ Bond Ford Anglia. She was 19th at Brands Hatch, 22nd at Silverstone, and did not finish at Crystal Palace.

In 1970, she continued to compete in Europe. Still with Alfa Romeo Benelux, she and Christine Beckers drove in the Spa 24 Hours, but did not finish, after a con rod broke. A little later, Liane jumped ship to Frami Racing Holland for the Zandvoort Trophy. She was fourth in Class Three, in a Ford Escort. That year, she spent more time in her home country, and contested some rounds of the Dutch Touring Car Championship for the Frami team. She was fourth in class again in the Zandvoort F5000 round, and third at the Pinksterraces, although she was later disqualified for non-standard ride height. At the Grand Prix meeting, she was fourth in class again. At Welschap, she was fourth overall, but class winner, a feat she repeated at the Nationale meeting. She scored another class win at the NAV/BRSCC Clubraces, but improved her overall position to third.

Later in the year, she travelled to Brazil to contest the Formula Ford Trophy in a Mistrale. Gabriel Konig was also competing that year. She did not finish very highly.

1971 was a similar story. Her main focus was the Netherlands championship, with some ETCC outings. In the ETCC, she was now involved with the Autodelta team, and would have had her first race in their Alfa Romeo GTAm at the Nürburgring, had she not been ill. For the next race, the Spa 24 Hours, she drove for Alpina in their BMW 2800CS, with Christine Beckers, but did not finish again, due to engine failure. At Zandvoort, she was third, this time driving for Toine Hezemans’ Radio Veronica team, in an Alfa Romeo 1300 GTA Junior. At Paul Ricard, she was driving for yet another Alfa team: Brescia Corse. She and Vincenzo Cazzago were ninth.

Away from touring cars, she entered her first Targa Florio this year, driving a Porsche 911.

In the Netherlands, she drove for yet more teams, after having disagreements with her Ford operation from last year. Driving for ELF SRT Holland in an Alfa 2000 GTAm, she was fourth in the Paasraces and at the F3 meeting, the latter after having to start from the pits. She was second in the Pinksterraces and eighth at the Grand Prix meeting, following a spin. A broken halfshaft put her out at Welschap. She also retired at the Formula Vee meeting, after losing oil pressure. After this event, she had another argument with her team and did not reappear.

In 1972, it was back to Ford power. For the first ETCC round at Monza, Liane drove a Kent International Racing Capri with Jean-Claude Franck. They retired with a broken con rod. This was her only European outing of the year. She made a return to the Dutch series with the same team. Bad handling put her out of the Paasraces, and she did not race in the championship again. Her new focus became the German DRM championship. Initially, she drove an RS 2600 Capri for Paul Neerpasch, and did not disappoint, coming fourth in her first race at the Nordschleife. She was seventh at Hockenheim after losing time with ignition problems. Unfortunately, she did not take part in any further races.

1973 was her last year of competition. Her season was spent in the Dutch championship, driving a Ford Escort. She was fifth in class in the Heropeningsraces, but did not finish the Pinksterraces, although she was back on form at the Grand Prix meeting, in fourth. This was her last race. She was scheduled to drive an Opel Gulf Commodore in the Spa 24 Hours, but had to pull out shortly before, as she was pregnant.

Throughout her short career, Liane showed some flashes of real competitive talent. It is noted by some commenters that she would perhaps have achieved more if she had avoided the repeated rows and walkouts that marred her professional career, allowing herself to work more closely with teams.

As well as racing, Liane was an occasional actress who appeared in some motorsport-related productions in the late 1960s and early 1970s.