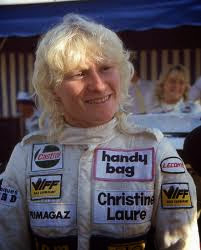 Patricia is an experienced and versatile Frenchwoman, whose career has encompassed rallying, hillclimbs, international touring cars, ice racing and GT racing. She last competed regularly in a Lamborghini Diablo in French GTs in 2004, finishing fourth in the N-GT class.

On the rally side, she began competing in the 1980s. Rallying was her initial route into motorsport. Early on in her career, in 1984, she entered the Citroen Total Trophée Feminin, in a Visa Mille Pistes. This was a contest to find a new female rally star. Patricia won her local heats and represented the Nancy area in the final part of the competition, but the prize drives went to Christine Driano and Sylvie Seignobeaux. This did not stop her from reappearing in the French championship the following season and in 1986, driving a powerful Group B Peugeot 205 T16. In 1987, she drove a Renault 11. She was French Ladies’ champion in 1985 and 1987, and runner-up in 1986. That year, she was also European Ladies’ champion, after attempting some events further afield, including the 24 Hours of Ypres. Her best finish was probably her seventh place in the Madeira Rally, co-driven by Pascale Bertapelle.

In 1988, she switched her focus to the Italian championship and won the Coupe des Dames there. As well as rallies, she did some circuit racing, finishing 24th in the Spa 24 Hours, with Valentin Bertapelle and Freddy Fruhauf. Their car was a BMW 635 CSi.

From there, she moved into hillclimbing, mostly in France. Her speed-eventing career began well, with third in the French championship in 1989, her first season. She was French Ladies’ hillclimb champion in 1992, after missing out on that honour in 1990.

Hillclimbing then led to rallycross and ice racing, via the Rallye des Gazelles, a women-only rally raid that Patricia entered in 1993. Between 1994 and 2001, she was a regular contender in the Andros Trophy. Her best finish in the Trophy was second, in the Promotion class, at Stade de France, in 2000. However, she was one of the top female competitors from her first season, and the Trophy attracts several women drivers every year. She was the top lady in 1994, 1999, 2000 and 2001. During this time, she made her way up the promotional ladder, culminating in a season in the Elite class in 2001. She was eleventh overall.

Patricia competed in rallycross at the same time as hillclimbing and ice-racing. In 1990, she took delivery of a Group B ex-WRC Audi Quattro, which became her car of choice for the season.

After her off-road adventures, she moved into touring cars in 2002. Her car for the French Supertourisme series was a BMW M3. Her best finishes were a tenth and fourteenth place. She had previously driven a Peugeot 306 in the Production series with Frederic Attaia. Later that season, she won the mixed crews’ class of the Rallye des Princesses, driving an Aston Martin DBS V8.

In 2003, she continued on the circuits, but in GT racing in the FFSA Coupe de France. She scored one class win and several podium places, finishing joint sixth in the Drivers’ Cup with her team-mate, Philippe Charriol. Their car was a Lamborghini Diablo GTR and their best overall result was seventh at Pau.

She returned to the championship in 2004, partnered by Christophe Bentivoglio this time. Their car was another Diablo, running in the N-GT class. They scored three class wins, at Val de Vienne and Le Mans. Their overall positions were one tenth and two elevenths. Patricia was 20th in the championship. She also won her third Rallye des Princesses, her second in an Aston Martin DB4. Her navigator was Jean-Christophe Marchand.

She ran the Tork/Toyota Trophée Andros team for several seasons after 2004, managing the likes of Alain Prost and Olivier Panis. The team won the Trophy in 2006. She now works in motorsport as an instructor and car dealer, but still competes in a few GT and historic events every year. In 2007, she contested several rounds of the FIA Historic Rally Championship, in an Alfa Romeo GTV 2000.