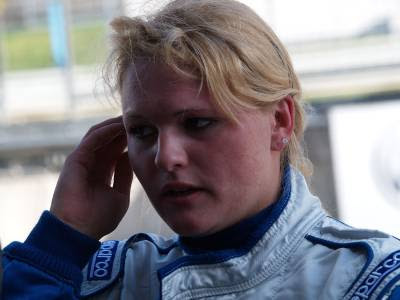 Gina is originally a single-seater racer from Germany. Her debut in senior motorsport came in Formula König in 2001, when she was 16. She scored her best finish of fourth at Lausitz, but did not reach the top ten in any of the other races. She was fifteenth overall.

She returned to Formula König in 2002, but did not fare much better, coming 19th at the end of the season. As a consolation, she was that year’s Ladies’ Champion.

The following year, she moved up to Formula Volkswagen in Germany. Her best finishes were two ninth places at Salzburg, and a ninth and tenth at the Lausitzring. Once again, these were her only top tens. She was twelfth overall.

Her next challenge was the German Formula Three Championship, driving for the Seyffarth team. She joined part-way through the season, at the Lausitz round. Lausitz had been something of a lucky circuit for her previously, but she only managed 16th. Her best finish was eleventh, achieved three times, at two more of the Lausitz races and at the Sachsenring. She managed to finish all of her races, but did not feature in the final points standings. As well as the German F3 series, Gina also entered the Austrian Formula 3 Cup. She was third overall, after two seconds at Lausitz and two thirds at the Nürburgring. This also gave her fourth place in the overall Austrian Racing Championship.

After the action of 2004, 2005 was a very quiet year for Gina. Her motorsport activities were restricted to one guest spot in the Toyota Yaris Cup. This gave her 31st overall.

In 2006, she rejoined the Seyffarth team for two Formula 3 Euroseries races. Driving in the Trophy class, she was first and third at the Norisring. Both times, she was 16th in the main standings. Her performances gave her a fifth place in the final Trophy leaderboard. She also raced in the SEAT Leon Supercopa, making a guest appearance at the Nürburgring for Konrad Motorsport. She was twelfth.

Driving again for Seyffarth, she did not finish the 2007 Dubai 24 Hour race in their Porsche GT3 997, despite qualifying sixth. Her co-drivers were Jan Seyffarth, Hannes Plesse, Christian Hohenadel and Philipp Wlazik.

Later in 2007, Gina took part in some endurance karting events and was fifth in the Leipzig 24 Hours. Since then, she does not appear to have competed and her website has been taken down.