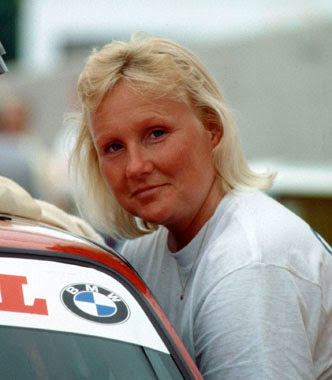 Nettan Lindgren-Jansson was born Mona Anette Lindgren, in 1957. Her father raced, and she took up karting as a teenager, before embarking on her own professional motorsport career.

This Swedish driver was one of many international faces in the British Touring Car Championship during the early 1990s, which is how she first came to the attention of this blog. Between 1989 and 1991 she drove a powerful BMW M3 E30 on the British circuits. She was a true international driver, as she was competing in the Swedish Touring Car Championship at the same time.

Nettan's results were not spectacular; the highlight of her BTCC days was a class win in 1990. For her first season, 1989, she took part in seven races, as a self-funded entry. Her best result was a third in class at Brands Hatch, thirteenth overall, and she was only 26th at the end of the season.

In 1990, she was one of three Swedish drivers in the series, along with Per-Gunnar Andersson, who was her team-mate for two races, and Tommy Borgudd. Nettan was much stronger this year, supported by BMW Sweden, and won her class once. Her best overall result was fifth, at Thruxton. She was also eighth at Oulton Park, and ninth at Donington. She was tenth overall.

In 1991, she was back to part-season, and only did five races, still with the BMW Sweden team. She and Per-Gunnar Andersson were team-mates again. Her best finish was tenth, at Donington, and she was 24th in the final standings. This was combined with a drive in the Swedish Touring Car Chamionship, running in the Group A section. Her car was the same BMW M3 E30. Actual race results are proving hard to find, but she was eighth in the championship, with Per-Gunnar Andersson won.

In Britain, she is most famous for her contretemps with former F1 driver Jonathon Palmer at Snetterton, in 1991. Palmer made a poor overtaking move and deliberately punted Nettan off the track. The move was unsuccessful and he ended up in the gravel trap nearby. Nettan was not going to take this lying down. She marched over to Palmer's car and told him exactly what she thought of his tactics. The disagreement threatened to get physical, with the Swedish lady slamming a door in her rival's face. Marshals intervened and the pair were separated. Palmer was later disciplined for his driving standards.

This is perhaps an injustice to Nettan. She had a good single-seater pedigree behind her, having started racing in 1978, in Formula Ford. Driving for Magnum Racing, she was sixth in her first season, and third in her second in 1979. After that, she competed in Sports 2000 in Sweden for a year. She was unplaced in the championship, and even the make of her car seems to be lost. It may have been a Tiga, as these were popular at the time, and she had raced a Tiga Formula Ford car in previous seasons.

Nettan proved herself to be a fine driver in her Formula Three days, between 1981 and 1984. Her first F3 season was a short one, consisting of five races in the Swedish series and one in the European, driving a Martini MK27. She drove the same car in 1982, again entering one European event, and was ninth in the Swedish championship. 1983 was another much-abbreviated season, with Nettan only making one outing in Europe in a newer Ralt RT3. In the Ralt, she attacked the Swedish, Finnish, European and Scandinavian F3 championships in 1984, now a member of the Flygvapnet team. She was eighth in Sweden, second in Finland and fifth in the Scandinavian series. Her European exploits consisted of a single race, so she did not score points.

Her career in tin-tops began in a Lancia. The marque was running a women’s racing series in Sweden in the 1980s, and Nettan won it four times between 1985 and 1988, winning all but four of the Lady Cup events during that time. Her sisters, Catta and Nonna, raced alongside and against her for at least a couple of seasons. This step down, albeit a successful one. to domestic club competition may well have coincided with Nettan's having children.

Later, after her British adventures, she re-entered Scandinavian motorsport. In 1993, she entered an M3 into Class Two of the Nordic Championship, and was third. She returned in 1994, still in the M3 but was sixth this time, after only entering four events. In 1995, she changed her car to a BMW 318is, and was sixth in the STCC.

Another hiatus followed, but once more, she returned, in 1998. She was now driving for the Ross Racing team in the STCC, and spent one season in a Ford Mondeo, and another in a Peugeot 406. She ran near the back both seasons, finishing in 24th place in 1998, and unplaced in 1999.

She retired from full-time racing in 1999 but remained involved with the sport, through her Swedish touring car team. She was sponsoring and mentoring young Swedish driver Caroline Jansson, who happens to be her daughter. Nettan competed in the UK fairly recently, for Sweden, in the 2005 Formula Woman Nations Cup, driving a Caterham. Closer to home, she raced a Ginetta in Sweden in 2007, alongside Caroline.

Remarkably, she made yet another comeback in 2011, in the Swedish Trofeo Abarth 500. She was thirteenth overall, after a solid run of mainly lower top-ten fnishes, the best being two eigthths.

She does not appear to have raced since 2012.