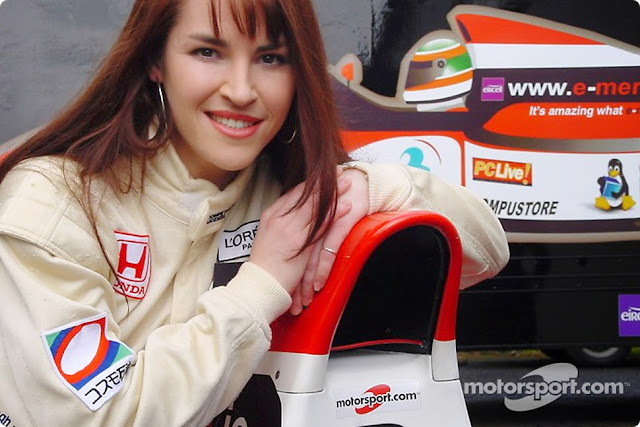 After her first trip to watch the Le Mans 24 Hour race, Sarah Kavanagh's only ambition was to be a professional racing driver. The 18-year-old art student, who was then living in Brighton, bought herself a racing kart and announced herself on the scene with a second position in her first ever race. After a year of kart competition, which yielded some excellent results, she decamped to her native Ireland in 1992 and entered the Irish Formula Ford championship. Her best finish was sixth. She learnt the art of handling a full-size car quickly and moved up to Formula Opel the following season, where she competed on and off for the next three years. Her only full season was 1994, when she picked up some top-ten finishes. Formula Opel was Ireland's top racing formula at the time, and Sarah was the only woman to have raced in the series, which brought her to the wider attention of the Irish press.

Although it was the roar of sports prototype engines on the Mulsanne Straight that first enticed her to the tracks, Sarah's ambition was now clear. She wanted to drive in Formula One, and in 1995 she moved back to England to climb another rung of the junior formula ladder. In Formula Vauxhall she was up against some future stars, including Formula One star Juan Pablo Montoya, and sports and touring ace Peter Dumbreck. The Irishwoman managed to hold her own in a tough field, and it is said that Montoya congratulated her on her prowess. She raced in the 'B' class with Wayne Douglas's team, which had won the B title the year before.

Ever-ambitious, Sarah acquired a much more powerful Reynard-Cosworth 95D for the 1996 season. With this car she entered the British Formula Two Championship. Her lack of funding meant that she only started two races: a gearbox failure put her out at Silverstone, but she was sixth at Donington. The starting grid was not brilliant though, and seeking better competition, Sarah started looking abroad for driving opportunities. The Reynard was eligible for the Japanese Formula Nippon series, and she completed another two races in Japan in 1997. She was fourteenth at Suzuka and did not finish at Mine. Competition for established team seats was fierce, and Sarah's sponsorship problems let her down again.

Staying with the Reynard for another season, she tried her hand at the new EuroBoss series in 1998. This European-based championship was for older, but not historic, F1 and F2/F3000-spec cars, and Sarah entered some rounds in the F3000 class, supported by E-Merge Racing. Her race results have been very difficult to track down, but it is known that she achieved class lap records at the Brands Hatch Indy circuit and at her home track of Mondello Park.

She was showing more signs of her early promise at last, and now had the support of E-Merge, so it was on to better things in 1999. The team bought a Jordan-Cosworth 193 from 1995 and Sarah got her first taste of F1 power for some of the 1999 EuroBoss rounds. After a few trial runs, she was ready to attack the championship in 2000, scoring at least one top-ten position at Donington, and earning some very quick lap times at the same track.

2001 was Sarah's best year yet. There was enough funding to tackle the whole EuroBoss schedule and she was familiar with the Jordan by now. A the end of the season she was ninth in the championship, with two ninth places, a seventh and a superb third overall at Mondello Park. The 28-year-old was now a motorsport news story and her exploits attracted attention from various sources, not least the McLaren F1 team. The British outfit invited Sarah for a performance assessment, and she was judged to be fit enough to tackle F1 competition, to her delight. She now had another string to her bow and this strengthened her claim on a seat in F1 proper.

Unfortunately, nothing came of the McLaren exercise. Although she was linked to drives in F3000 and later, GP2, these did not materialise either, and Sarah did not race competitively for several years. Behind the scenes, she and her manager were trying to put together sponsorship packages and find racing opportunities, but these never came to fruition. In 2004, after more testing and physical assessments, she was said to be close to signing a four-year testing and development deal with the Jaguar Grand Prix team, which could have led to a race seat. However, contractual issues intervened at the last minute, and she spent 2004 on the sidelines again, working as an instructor and motoring journalist.

Sarah's manager has come up with a number of theories as to why her racing career has failed to take off as it might have done. Lack of finances, an issue in itself, has meant that she has rarely completed a whole championship. Despite several years of racing she is still relatively inexperienced, although she has shown flashes of brilliance and clearly has aptitude for driving powerful vehicles. Her perceived reluctance to prove herself in the lower formulae has also worked against her. There are accusations of press negativity in Ireland too which may not have helped her cause.

For 2006, Sarah intended to return to EuroBoss with the Jordan, for as much of the championship as possible. This did not happen. It is a shame that her single-mindedness to succeed as an F1 driver may also be her downfall; if she had opted to prove herself in the more cost-effective fields of GTs or touring cars, she may have had much more of a career by now.

In a 2014 interview, Sarah described herself as "retired". She lives in France.

(Image from www.motorsport.com)
Posted by Rachel H-G at 14:54