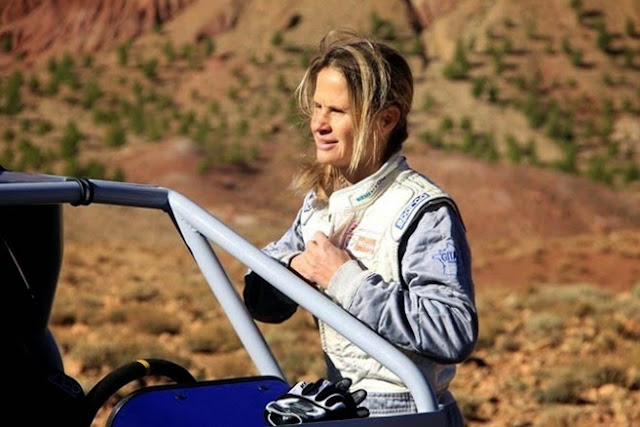 In 2004, Isabelle Patissier of France celebrated her first rally raid win on the Oman Desert Express. She drove a Nissan Pathfinder run by the French Dessoude team on the arduous cross-country race for production vehicles. On her next event, the Rally Optic 2000 in Tunisia, she and Bernard Irissou scored a victory in the production class and came ninth overall. For the rest of the year, Isabelle led class T1 in the World Cross-Country Cup and walked away with the title.

Prior to her switch to motorsport in 2000, Isabelle was twice world champion in rock-climbing, and a multiple French champion. Although she loved cars and driving and had done since passing her driving test, they took a back seat until she had achieved almost all she could in the climbing world.

By 2000, it was time for a change. Isabelle filled the gap left by her mountain training by entering the Star Trophy of France, a racing series. Her first race was a disaster; she managed to spin off on a bend at Spa. Still, she persevered and finished the season with a best finish of second. The following year she continued her track activities, racing in the Star Trophy, plus some karting and Formula Ford too. However, a third place in the Rallye Aïcha des Gazelles womens' rally raid event made it clear where her abilities really lay, and although she still raced in the Star Cup on and off, rallying became her main focus.

The start of 2001 was busy. Isabelle entered her first Dakar, as co-driver to Yves Fromont, in a Toyota. They did not finish. In a complete change of scenery, she also raced in the Trophée Andros ice-racing series in the kart-cross class, as one of the first contenders for the Andros “Ice Girls” ladies’ championship. Later in the year she returned to the sand dunes for the Orpi Rally Morocco as a driver, and was rewarded with a twentieth place. Round-the-world yachtsman Steve Ravussin was her navigator.

She took part in her second Dakar in 2002, still using a Toyota Landcruiser with Yves Fromont, as part of an arrive-and-drive package. She did not finish.

2003 saw her build on her rally-raid success. She drove in the Dakar again, finishing mid-field. Later, she revisited the Morocco Rally, coming twelfth this time. Her first start in the Rally Optic 2000 in Tunisia gave her twentieth position. Her car this year was a buggy based on a new Volkswagen Beetle. Isabelle likes to be different, and this attracted her to this unusual but competitive vehicle.

At the beginning of 2004 her talent was recognised, and she earned a regular race seat with Nissan Dessoude, alongside Bernard Irissou, for the Dakar and the Production class of the Cross-Country Cup. Together with their mechanics and crew, they became a very effective team. On the Dakar, they were 23rd, better than Isabelle's previous results. Out of the four FIA Cross Country events they entered, they won class T1 in three of them: Rally Optic 2000 in Tunisia, Rally Orpi Morocco and the Rallye d'Orient in Turkey. Their overall positions were two ninths and a twelfth. In their last event of the season, the UAE Desert Challenge, they were tenth and second T1, which was enough to award the T1 World Champion's title to Isabelle.

In recognition of her excellent results in 2004, Nissan Dessoude allowed Isabelle to move up to a T2 prototype Pathfinder in 2005. Her schedule was shorter than the previous year's and did not include the Dakar Rally this time. In the navigator's seat was Thierry Delli Zotti, previously with Carlos Sousa. Bernard Irissou was now working with Serge Jordan.

Their first raid together was a disappointment; they were running in the top ten of the Optic 2000 Rally when they were struck by two punctures and a series of mechanical problems. It was doubtful whether Isabelle would start the last stage, but she managed, having dropped to 37th.

Later in the year, she tackled the Rally d'Orient and was a much more competitive seventh overall. Her last rally of the season was the Pharaohs in Egypt, in which she was sixth, ending the year on a positive. She had scored FIA points on two of her three outings.

Isabelle's Dessoude contract was not renewed for 2006. For the Dakar, she used a Mitsubishi Pajero, and was 39th. She kept up her partnership with Thierry Delli Zotti, who was now her partner in life as well as in the car. She contested two major raids, coming thirteenth in the Orpi Rally Morocco in the Pajero and seventh in the Optic 2000.

In 2007, Isabelle and Thierry received delivery of another specialist Buggy, designed by Thierry and powered by a V8 Corvette engine. They were 36th in the Dakar in it. They also entered the Orpi Rally Morocco, and were fourth in the two-wheel drive class, twelfth overall.

Political unrest and safety concerns in West Africa put paid to the 2008 Dakar, and threw the rally raid season off-kilter. Isabelle’s plans for her next Dakar were put on hold, and it does not look like she competed much, or at all, during 2008. However, she returned to the Dakar, now staged across Chile and Argentina, in 2009. It was her first competition in South America. She and Thierry, driving their Buggy, were 17th overall, Isabelle’s best result. She also contested the Silk Way Rally, across Russia and Inner Asia, in the autumn, but did not finish.

In 2010, she returned to the Dessoude setup. She first drove the two-wheel-drive T1 Pathfinder in the Dakar, still running in South America. Sadly, she and Thierry retired on the third stage, after multiple problems.

In 2011, she moved teams to the Sadev operation, although she stuck to Nissan power with their Buggy. This proved a smart move, as she scored her best-ever Dakar finish: sixteenth, and third in the two-wheel drive class.

She made another attempt on the South American Dakar in 2012, alongside her now-husband Thierry, and was 29th in a Dessoude-supported Oryx Buggy. The pair also entered the Silk Way Rally in Russia, in a new lightweight, motorcycle-engined buggy based on a Renault Clio. They retired halfway through, after the third stage.

In addition to this, Isabelle also returned to competitive climbing in 2011. She claims that her years of climbing gave her the spatial awareness and understanding of her surroundings that serve her so well in rally raids.

She does not appear to have competed in 2013, but was back on the Dakar entry list for the 2014 event, driving a Buggy. She was 26th overall.

In 2013, she and Thierry set up their own off-road driving school, which offers specialist tuition and women-only training.

She is also a popular motoring journalist in France, equally at home writing about bad-weather driving techniques or the art of driving in high heels.

(Image from www.isabellepatissierpilotage.com)
Posted by Rachel H-G at 13:30