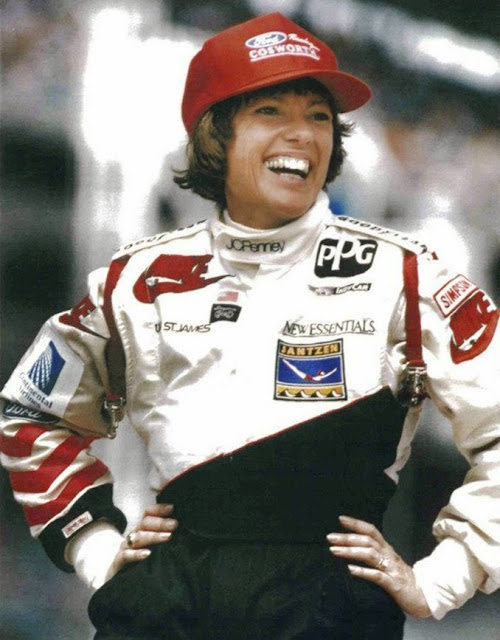 One of the USA's most recognised speedqueens, Lyn St James was born in 1947. She took part in her first races in 1972, at the age of twenty-five. Although she is best known for her exploits at the Indianapolis 500, it was sportscar racing she initially gravitated towards. Single-seaters came much later, after considerable success in closed-wheel competition. She was a regular in IMSA events for the entirety of the 1980s and proved herself a capable driver, with a series of class wins in big races. She also finished in the top ten on numerous occasions, driving as part of a team or on her own.

Her first IMSA entry was the Sebring 12 Hours in 1977, although her team went out before she got to drive. The following season, driving for the same Autodyne team in a Corvette, she was 17th, with Luis Sereix and Phil Currin. She also drove in an IMSA race at Daytona, but did not finish. She repeated her 17th place at Sebring in 1979, driving a Ferrari 365 GTB/4 with Bonnie Henn and Janet Guthrie. At the Paul Revere Daytona event, she and John Carusso took the Autodyne Corvette to eighth, fourth GTO.

In 1980, she was 17th yet again, but at the Daytona 24 Hours with a different team. She, Mark Welch and Tom Winters drove a Trinity Racing Mazda RX-7. Lyn’s results were not always brilliant; later in the season, at Sebring, she and Ralph Kent-Cooke could only limp home to 49th in a Porsche 935. She changed teams yet again for the 1983 season, competing for Nimrod Racing in their Aston Martin. She was 44th at Daytona and did not start at Miami, but was fifth at Sebring, with Drake Olson and Reggie Smith. An accident put her out at Road Atlanta. She transferred to a Mercury Capri for the Daytona finale, but could only manage 37th.

In 1984, she drove an Argo JM16 Ford. After a couple of non-starts, she and Jim Trueman were twelfth at Road Atlanta and 39th at Charlotte. Driving solo, Lyn was tenth at Laguna Seca and Sears Point, and did not finish at Road America. With Herm Johnson, she was eighth at Watkins Glen. With yet another co-driver, Howdy Holmes, she was a lowly 21st at Michigan, but a career-best third at the second Watkins Glen event. Back with Trueman, she steered the somewhat unreliable Argo to seventh.

Still with the Argo, she had a poor start to 1985. During the Daytona 24 Hours, the car's gearbox went after only 54 laps. She and Eric Lang were 28th at Miami, and she was 25th at Road Atlanta with Brent O’Neill. A switch to a Roush-run Mustang was more profitable; she and Bruce Jenner were ninth at Riverside, 17th at Charlotte, and third at Mid-Ohio. A solo Lyn was 16th at Laguna Seca and 30th at Portland, but fifth at Sears Point and ninth at Watkins Glen. With Bill Elliot, she was fourth at Watkins Glen. Driving a Mustang Probe at Sears Point, she only managed 17th. A high point of this season was her class win in the Roush car with John Jones. They were eleventh at Road America. They repeated the class win, with a ninth overall, at the Daytona finale. Another high point was her lone-driver second place at Columbus.

The 1986 season began at Miami, with Lyn back in a Mustang Probe, this time for Zakspeed, with Pete Halsmer. They were eighth. The same duo were 15th at Road Atlanta, and a faltering 42nd at Riverside. Paired with Tom Gloy in the same car, Lyn was fifth at Portland, although Sears Point only gave them a 16th, and the finale a disappointing 33rd. Driving with Bobby Rahal, she was 27th and not classified at Columbus.

Back in the Roush team for 1987’s Daytona 24 Hours, Lyn, along with Tom Gloy, Bill Elliot and Scott Pruett, was seventh, and first in the GTO class. The rest of the season was steady rather than stellar. She drove alone for the greater proportion of it. Her best finish was sixth at Summit Point. She was also seventh at West Palm Beach, and came eighth four times. Her team attempts, including Sebring, were less successful.

1988 saw a much-reduced IMSA programme for Lyn, who was still with the Roush operation. At Daytona, she retired late on. Her team-mates were Mark Martin, Deborah Gregg and Pete Halsmer, and the car was a Lincoln-Mercury Capri. At Sebring, Lyn and Deborah did much better, finishing eighth and second in class. The car this time was a Mercury Merkur XR4Ti, a Ford-based GT car. These were her only outings of the year.

1989 started poorly. After an accident to the Tom Milner Ford Mustand Probe, Lyn was unable to start at the Daytona 24 Hours. This was her only entry into an IMSA event that season.

1990 was a much shortened season too, but it led to a far better result. Lyn, Robby Gordon and Calvin Fish were fifth and first in the GTO class in their Roush Lincoln Mercury Cougar XR7, from a lowly 25th on the grid. Later, at Sebring, the same driver trio were sixth, and won their class once more, again from a long way down the grid. The same year, Lyn, driving solo, scored five top-ten finishes in Trans-Am.

She also raced in Europe on occasion, and entered the Le Mans 24 Hours twice. The first time was in 1989, in a Spice SE89C Ford, which lasted fifteen hours before breaking down. Her team-mates were Ray Bellm and Gordon Spice. The second time was as part of an all-girl team with Cathy Muller and Desiré Wilson, in an updated Spice SE90C Ford. She did not fare any better this time as the team crashed out early on.

For 1992 Lyn took her considerable racing experience to the ovals of her homeland. She took to single-seaters fairly easily, and passed her Indy rookie test straight away. She also qualified her Lola Chevrolet first time round at the fabled Brickyard. From a lowly 27th on the grid, Lyn made her way up to eleventh overall at the end of the race. This single battling performance netted her the Indy Rookie of the Year award. She remains its only female recipient.

Switching cars for the to a Lola Ford for the 1993 race, Lyn qualified again, in 21st. She retired with gearbox trouble. The 500 had not been her only race that year; she had entered six Indycar rounds and finished three. She was thirteenth at Phoenix, seventeenth at Long Beach and twentieth at Portland. She retired at Cleveland and Michigan and did not qualify for one race in Detroit.

1994 was a limited year in many ways, with Lyn only making a "guest appearance" at the Indy 500, after failing to secure more seat time. However, she certainly made her mark in her one race, qualifying a career-best sixth, the highest-ever for a female driver at the time and a good grid position for a relatively inexperienced oval driver. The race itself did not live up to its early promise, and she was nineteenth at the end of it. It was a similar story at the next Indy 500, where Lyn broke the womens' closed-circuit record in qualifying (at 225.722 mph), but crashed out of the race proper at the first corner.

In both 1995 and 1996 she managed to compete in some other races too. She was 20th at Milwaukee, and retired at Michigan, in 1995. As well as the 1996 Indy 500, where she dropped out while in fourteenth position, she drove at Phoenix and Orlando. The Orlando race gave her her best finish of her career - eighth.

By 1998, the best part of Lyn's career had probably passed. She returned to Indy and gave a reasonable early performance in the race, but retired whilst running in thirteenth. By now, she was more involved in motorsport promotion and administration than in actual racing. She was pivotal in setting up the ambitious but short-lived Womens' Global GT Series which ran alongside the American Le Mans series, and founded her own scholarship fund for female drivers, the Kara Hendrick scholarship. Kara Hendrick had been a promising karter who died in an accident.

She did not qualify for the 500 in 1998 or 1999, but scraped on to the grid for the 2000 race. This time she had the distinction of being the oldest driver ever to take part, at fifty-three. The 2000 Indy was also so far unique in that two women started the race that year - Lyn and Sarah Fisher. Lyn's participation came to an end on lap 69 when she crashed her G-Force Aurora. This heralded the end of her professional driving career and effectively handed the reins to Fisher as the "First Lady" of Indianapolis.

Lyn continues to work tirelessly to promote female participation in motorsport and has become an outspoken ally of women racers everywhere. She still races historics on occasion at events like the Goodwood Revival, where she drove a Galaxie 500 touring car with Desiré Wilson.

Although Lyn was not the first, nor the most successful woman in Indy racing, she was definitely the best-known for a long time and has used her profile to do a great deal of good.

She was one of the judges for the initial driver selections of the W Series in 2019.

(Image from www.caranddriver.com)
Posted by Rachel H-G at 14:43