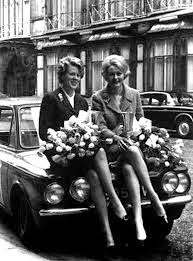 Growing up in Ireland, Rosemary Smith had little interest in cars. Her great ambition was to be a fashion designer, and after leaving school she studied hard to achieve her dream. While working as a junior dress designer, her classic good looks did not go un-noticed, and she was soon modelling the creations as well as designing them. It was only by chance that she fell into motorsport.

Delphine Bigger was a friend of Rosemary's in the business, who was a keen amateur rally driver. Left without a navigator one weekend in 1959, she roped in Rosemary to fill in, and inadvertently started a new career for her. It did not start well though, as she proved pretty incompetent at map-reading and soon got the pair lost. Delphine hurriedly switched seats with Rosemary and took over the maps herself before they were completely lost, after it was found that she had been holding the map upside down. Once the roles were reversed, Rosemary really got into the driving and was scoring respectable times. The arrangement with Delphine continued for a couple of events, with Rosemary going over the start line in the passenger seat and then switching when the duo were out of sight. However, she soon wanted to enter rallies as a driver in her own right, after realising that she enjoyed driving and wanted to do more. The two swapped places and continued to compete together for a while, until Delphine was injured in a serious crash, and Rosemary had to go it alone.

Between then and 1962, Rosemary accepted drives in various rallies, sitting alongside drivers including Sally Cooper in Monte Carlo, and a fully-recovered Delphine in the RAC in 1961, driving a Morris. Eventually, she was offered a works contract with Rootes, after a strong performance in a private Sunbeam Rapier on the 1962 Monte Carlo Rally. She and Rosemary Seers, an experienced navigator, competed together in a Sunbeam on that year’s RAC Rally.

The two Rosemarys’ first Monte together in the works Rapier was an ordeal. They crashed out and had to be rushed to hospital. Thankfully, no long-term harm was done. In a similar car, Rosemary tackled the Tulip and Alpine rallies. Elma Lewsey was her navigator for the Alpine event and Margaret Mackenzie was on the maps for the RAC Rally. Although Rosemary gained experience this year, good results were not yet coming her way. An exception was that year’s Tour de France, in which she was third in the 2000cc GT class, tenth overall. Margaret Mackenzie was co-driving once more, and the car had been upgraded to an Alpine.

In 1964, Rootes had developed a rally homologation of the tiny Hillman Imp, inspired by the Mini, and Rosemary found her true metier driving this car. She began the year with a drive in a Rapier, in the Tulip Rally, but sampled the Imp in the RAC Rally. After a lacklustre initial performance, she switched to a Sunbeam Tiger for the Geneva Rally, and was 15th.

By the time 1965 came round, she had learned the car more fully and was able to drive it to its true capacity. In the inaugural event of the season, the Monte, she and Margaret were fourth in class, after a battle against terrible weather which accounted for 205 of the 227 starters. Assisted by Sheila O’Clery, she took the Imp to her home rally, the Circuit of Ireland, in which she was the top lady on many occasions.

Driving with Sheila Taylor, she won the GT class in the Alpine Rally and was a fine fifth overall in the Scottish Rally. The RAC was never her best event, and Rosemary could only manage 25th. In Canada she was up against more snow for the Canadian KLG Rally, and was eighth overall, first in class. Atrocious weather also helped her to her greatest triumph during this season. Assisted by Valerie Domleo, she drove through snow and storms on the Tulip Rally and took advantage of the prevailing handicap system, to power the tiny Imp to an outright win.

She did not repeat her achievement with the Imp in 1966, but it was an impressive year nevertheless. It started poorly, when she was disqualified from the Monte for a technical infringement, but soon picked up. In contract to last year's snowy escapade, she was first lady on the Acropolis Rally and third in that summer's Scottish event. She and Valerie Domleo also won their class. Another class win was in order in the Gulf Rally, and she and Val were second in the 1300cc class in the Circuit of Ireland. With Margaret Lowrey, she could only come 14th on the RAC; it was never her favourite event. The Alpine was another disappointment, as the Imp’s sump sprung a leak. Rosemary and local girl Anne Coombe fared much better in Rosemary's second visit to Canada. She entered the Shell 4000 marathon across the country and as part of the rules the pair had to do all servicing themselves. They handled the task admirably, coming eighth overall, and first in the 1150cc and under class.

For 1967 Rosemary had a new co-driver, in the shape of Susan Seigle-Morris. In her last year as a Rootes works driver, her best results were fourth overall on the Scottish Rally, and seventh overall on the Circuit of Ireland, with a class win both times. Back with Ann Coombe, she was thirteenth in the Shell 4000 event, driving a Rapier. A reunion with Margaret Lowrey gave her tenth on the Alpine, in the Imp. True to form, she and Val Domleo did not excel in the RAC Rally, finishing 58th.

1968 began with another run in the Monte Carlo Rally in the Imp, but not long after, Rosemary transferred to Porsche, to drive the powerful but unpredictable 911. Her time there was not as fruitful as her Rootes days and she jumped ship to Ford before the end of the season. This led to her being entered in the famous London-Sydney World Cup Rally in a Lotus Cortina. She was paired with the Frenchwoman Lucette Pointet and made it to the finish after a number of scrapes. A misfiring cylinder sapping the power meant that she could only summon enough revs to get up the Khyber Pass in reverse, and angry locals made off with the oil supplies when they found out that neither Rosemary nor Lucette was carrying any jewellery. They were the first female finishers.

By 1969 Rosemary was winding down her career. She had got married and her husband did not approve of her "ego trips", as he called her rallying activities. She went out with a bang by winning the Cork 20 International Rally, back in a Hillman Imp. Another highlight was her sixth place in the Scottish Rally, driving a Ford Escort. Her apparent swansong was the 1970 World Cup Rally, in which she drove an Austin Maxi to tenth overall, with a class win. She and Alice Watson also entered the Scottish Rally in the Maxi.

However, we had not seen the last of Rosemary Smith. Her desire to drive really fast lasted longer than her marriage, and she was back on the scene only a year later, in 1971, driving a Lancia Fulvia to 18th on the Monte, with Alice Watson. In 1972, she accepted a Ford Escort drive on the RAC Rally, navigated by Pauline Gullick. She remained a fixture on the international circuit for a few more years and then became a part-time driver, accepting drives in both races and rallies.

She still races to this day, usually on the track in a Hillman Imp or Sunbeam Tiger. She is a regular visitor to the Goodwood Revival and also crosses the Atlantic to revisit Sebring on occasion. As well as their rally cars, Rosemary also drove sportscars in the big American races at Sebring and Daytona, although she preferred the variety in rallying. She was entered for Le Mans once in a Sunbeam, but was not allowed to drive as the French authorities would not permit women to take part. This was ostensibly due to Annie Bousquet's fatal accident at Rheims in 1956.

Her first big circuit race was the 1966 Daytona 24 Hours, where she shared a Sunbeam Rapier with Smokey Drolet. They were 30th overall. Later, in 1969, Rosemary and Smokey raced together again, in the Sebring 12 Hours. They were 26th overall in a BMW 2002. By far the most notable of Rosemary's circuit excursions were those she made as part of the Ring Free Oil Motor Maids team, beginning in 1970. That year, she was partnered with Janet Guthrie and Judy Kondratieff for the Sebring 12 Hours, in an Austin-Healey Sprite which was little more than a showroom model. The all-female team got the car to the finish, and were 19th overall. The following year, at Sebring, Rosemary drove a better-prepared Chevron B19 for the team, with Janet Guthrie, but did not finish. It was during one of these races that she caused some consternation in the team pits, as the mechanics were noticing coloured scrapings that they thought were coming from bodywork rubbing somewhere. The real cause was a bored Rosemary, picking off her nail polish as she raced.

As well as her racing activities, Rosemary now runs an organisation promoting road safety and good driving practice to Irish teenagers. In 2017, she was invited by Renault to drive a recent Formula One car as part of their 40th anniversary celebrations. She "jumped at the chance" to compare notes with Jolyon Palmer.

Her autobiography was published in 2018.

(Image from a Rootes promotional shoot)
Posted by Rachel H-G at 14:42