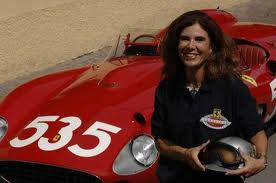 Prisca has competed as a rally, touring and sportscar driver. She is the daughter of Piero and Isabella Taruffi.

During the 1980s, she competed extensively around Italy, winning various ladies’ awards in racing and rallying, and picking up some wins in one-make events.

Her first steps in organised motorsport came in the 1984 Coppa Renault 5 Turbo, in which she was sixth in the junior drivers’ standings. In 1985, she was the fourth-best junior driver. That year, she also branched out into rallying in the Renault, and won her first Coupe des Dames, in the Trofeo Nord.

After that, she concentrated more on rallying. Her best result in 1986 was tenth on the Monza Rally, with another ladies’ award. In 1987, she competed in her first edition of the revived Targa Florio, as well as other Italian rallies. She had picked up speed now and was third in Group N in the Rally del Salento. In 1988, she continued to rally around Italy, and the following season, she was crowned Ladies’ Champion of Italy. Even better, she was third in the Italian Group A standings and second in the European Ladies’ championship. This was after five top-five finishes in Italian events, including ninth on the Targa Florio, and fourth in the rallies of Salento and Messina. She also achieved a pair of sevenths in the Rally della Lana and the Rally Piancavello. Her car was a Ford Sierra RS Cosworth.

In 1990, she was less active on the competition front, but she still managed an eighth in the Mille Miglia, driving the Cosworth.

In 1991, she returned to circuit racing. She was competing in the Campionata Italiano Velocita Turismo (CIVT). Her best finish was third at Varano, as well as a pair of fourths at Misano and Vallelunga and a fifth at Magione. Rallying had not been forgotten either, and she won Group N in the Rome Rally.

1992 was a similar story. Prisca was the ladies’ champion in the Italian Renault Clio Cup, and won the Mugello Slalom event outright in a Fiat 500. On the stages, she was fifth overall in the Rome Rally, and first lady.

Between 1993 and 1997, Prisca took a step back in her motorsport activities and concentrated on testing and media work. She did attempt some races, such as the Alfa Romeo SZ Trophy in 1993, but she did not challenge for any championships. In 1998, she made a confident return to the CIVT in an Alfa Romeo 156. She was seventh in class and third in the Ladies’ standings. Another hiatus in her career followed, which lasted until 2001, when it took another turn.

International sportscars were now the focus of her activities. She was 15th overall in a Porsche Supercup round at the Monza Grand Prix, and then she drove another Porsche GT3 in an FIA GT round at Jarama. Sadly, she did not finish, due to a broken driveshaft. Her team-mate was Paolo Rapetti. Later, she entered one round of the VW Fun Cup at Vallelunga, and was the second female finisher.

In 2002, she did some karting in Monte Carlo, and had her first big rally raid result in the all-female Rallye Aïcha des Gazelles. She was first in class in her Kia Sorrento. Elsewhere, she tried her hand at historic racing in the Carrera Panamericana, driving an Alfa Romeo Giulietta Sprint. She won her class again.

After another season off, Prisca returned to rally raids in 2004. She drove a tiny Kia Picanto on the Pharaohs Rally in Egypt, and won the Ladies’ class of the Biella off-road rally, in a Suzuki. She tackled the Pharaohs event again in 2005, but in a Fornasari special this time. After a hike in power for 2006, she was eighth in Egypt, driving a Nissan Pickup, as well as the first Italian across the line. She was also eighth and first Italian in the Gazelles rally, in a Kia Sorrento this time.

2007 was a busier year. She travelled to the Middle East for the Pharaohs Rally and the Dubai Desert Challenge, but retired from both events, driving two different Nissans. She had better luck in the Gazelles event, finishing third in class in her Hyundai Santa Fe. Mid-season, she returned to Italy for a very special historic event, the Mille Miglia Storica. She drove the Ferrari 315S in which her father (and mother) won the original Miglia in 1957. Since then, she has driven the Ferrari in other historic events.

2008 and 2009 included a mixture of the Gazelles rally and historic racing for Prisca. She was third in class once more in the Gazelles in 2008, driving a Mitsubishi Pajero.

She continued with her media work, and now plays golf competitively.