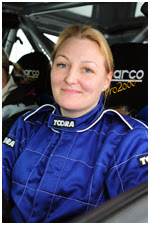 Finland is famous for its rally drivers, and has even produced some female stars over the years, like Minna Sillankorva and Eija Jurvanen. During the 1990s and 2000s, the Finnish rally scene's leading lady was Minna Lindroos.

She was born into a rallying family in 1977. Her brother Joonas also drives in the Finnish championship. Her motorised activities began in 1996. She was sixth in class in her first rally, in a 1200cc Lada given to her by her father.

In 1997, Minna jumped right in at the deep end, in the Junior class of Group F, a high-speed, highly-modified rally championship very popular in Finland. She was the first female driver to attempt Group F events against men, and was fourth in Class Two at the end of the season. After a year of that, she settled for a Vauxhall Astra and entered the main championship, with Aki Hietala as her navigator. She also earned an entry in Rally Finland, but retired. One consolation was that she won her first Finnish Ladies' Championship.

She improved on her results in 1999, when she guided the Astra to fourth in the national Group N standings for under-two-litre cars. It was also one of her busiest years for international rallies. During the snow rally season, she tackled the Arctic and Swedish rallies. She retired from the Rovaniemi event but was 39th in Sweden, alongside Jani Laaksonen. For the Finland rally later in the year, she teamed up with Sari Kontro-Silvennoinen, but the pair retired.

Minna and Sari drove together for the 2000 season, after Minna switched to a more powerful Mitsubishi Lancer Evo 5, as driven with such devastating effect by her countryman Tommi Makinen. Straight away, she was 27th on the Arctic Rally. At Rally Finland, she also impressed, coming 26th overall and fifth in Group N.

Sticking with the Lancer for 2001, the pair were a career-best fifteenth in the Arctic Rally. They were 21st in the Pohjarmaa event and third in Group N on the prestigious Mantta Rally. This event is the traditional warm-up for Rally Finland, and many international drivers take part. Sadly, Rally Finland itself brought another retirement for Minna. She was still thirteenth in the Finnish championship, however.

2002 was a quieter year. Minna was working with new co-driver Sirkka Rautiainen for the first time. They tackled the Finnish championship and entered the Arctic Rally again, but retired. The Lancer was getting a little long in the tooth and reliability was a problem, so it was time for a change, although that particular car had given Minna some of her best results, and her best championship finish - ninth.

Her car of choice for 2003 was a Honda Civic Type R. She and Sirkka were 31st in the Arctic Rally, on Minna's favoured snow surface, at the start of the season, and managed to pick up some other creditable finishes in the Finnish series. They were 38th at Osuuspankki and 43rd at Vaakuna, against very large fields including World Championship drivers like Jani Paasonen and Sebastian Lindholm. It was a shortened season for her, as she was sharing the car with Joonas.

Having learnt a lot about how the Civic worked and forged a good relationship with Sirkka, Minna attacked her national championship again with renewed vigour. She was an unassuming 61st in the Arctic rally on her sixth attempt and 55th on the Exide Rally, but at Mantsala she was an excellent thirteenth. On the summer Syrus Rally she was 31st.

A year off followed in 2005. Minna concentrating on finishing her driving instructor training and did not compete in any rallies.

In 2006, Minna tackled six Finnish National championship rallies, in a bid to win the Ladies' Trophy yet again. She succeeded, after finishing as the first female in all but one rally. Her co-driver was Sirkka Rautiainen once more. She also made a move into historic competition, taking up the co-driver's notes for Timo Koskisen in his Ford Cortina GT, after co-driving for her brother in three events late in the season.

Minna had a long break from competition between 2006 and 2016, and presumably settled down to life as a performance driving instructor and TV producer in Finland. Her website was taken down and her page on the family site was no longer updated. However, she made a comeback in 2016, driving a BMW 325i in two Finnish rallies. She was seventeenth in a snow rally at Keurusselka, from 79 finishers, and fifteenth in the historic Mantta rally.

Since then, she has co-driven occasionally for Ville Lehtonen in a BMW.