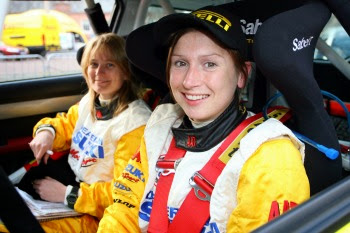 Lorna in the Suzuki

In 2005, Lorna Smith was ninth in the British Rally Championship, cementing her status as one of Scotland's brightest rally hopes and, at the time, Britain's best lady rally driver.

Lorna has motorsport in the blood; her father Andrew is a club competitor who acted as her co-driver for quite a long time. She is, or was, also employed as an engineer by Prodrive, who ran Subaru's World Rally Team. It was while studying engineering at university that the bug really bit. She saved up her student grant and bought a Ford Fiesta, which was to be her trusty mount for a good few years. At first she stuck to sprints and hillclimbs, as this was cheaper. After a while, she was winning her class and even setting some class records on the courses. When her undergraduate studies had finished, she stepped up to the rally stages, still in the Fiesta. By now it had been fitted with a 1700cc engine.

For a couple of years, Lorna and her father drove in club events up and down the United Kingdom, surprising a few people with the pace of the 1976 Fiesta. In 2001, she also competed in selected rounds of the Volkswagen Polo Challenge, to good effect, securing a couple of third places in class. For 2002 it was back to the Fiesta, apart from when Dad took up driving duties while his daughter competed in a triathlon. The pair finished second in the 1600-2000cc class of the North East Rally Championships after a good season.

However, the season was not over yet. Although the Fiesta had proved competitive against its own kind, it was getting long in the tooth, and Lorna needed more power if she was to challenge further up the leaderboard. She bought a Mitsubishi Lancer Evo IV, which was getting on a bit itself, but it rewarded her with her best finish to date: seventh on the Kingdom Stages.

Still with the Mitsubishi, she attacked the Scottish Championship head-on, coming ninth. Her best finish was eleventh on the Park Systems Furniture Stages. She managed top-twenty finishes on most of the rounds, against much more powerful WRC and Group A machinery. Towards the end of the season, she also competed in the famous Tour of Mull, but retired.

An early-season rally in 2004 saw her set a new best finish, fourth overall on the Red Kite Stages. She and her co-driver had spent most of the event not knowing what their position was at all, so it was a nice surprise.

For the rest of 2004, Lorna and co-driver Dave Weston made a simultaneous campaign on both the British and Scottish Championships, using the Mitsubishi for the Scottish rounds, and a group N Subaru Impreza for the BRC. Their best Scottish finish was thirteenth, in the Snowman Rally. South of the Border (for some of the events anyway), they racked up a series of consistent mid-place results, with good class positions. Lorna's best overall placing was twelfth on the Trackrod Rally. She and Dave were eighteenth at the Pirelli Rally, fourteenth on the Scottish, nineteenth on the Jim Clark Rally, fifteenth in Ulster and eighteenth in the season-ending Tempest. Transmission problems, with the gearbox and linkages respectively, put Lorna out of the Welsh and Manx events. What should have been a climax to her season was also a bit of a damp squib; on her first Rally GB, the Impreza's brakes went, forcing her to retire.

Still, she was tenth overall and runner-up in Group N in the BRC, as well as Ladies' Champion.

The following year, more and more people in the sport were taking notice of Lorna. She got herself involved in a driver exchange programme and spent the early part of the season competing in New Zealand. Driving a Mitsubishi Lancer Evo VI with Stuart Merry, she was 38th in her second WRC round, after a few mechanical troubles. The Bay Rally Gisborne was less fraught and she was thirteenth.

Back in the UK, Lorna was part of the high-profile Eddie Stobart Rally Team for the BRC, driving a Group N Impreza again. Her team-mate was Matthew Wilson in a WRC Focus, and she was up against some genuine Ladies' Championship talent, in the shape of Jennie-Lee Hermansson, and Kate Heath in another Impreza. Lorna showed she had developed as a driver from the start, coming ninth on the Welsh Rally and tenth on the Pirelli. At this point she was the leading Group N competitor. She suffered a series of punctures on the Scottish, leaving her and Dave Robson in nineteenth, but it was still enough to keep the Group N lead. Despite coming eleventh, she dropped down to second after the Jim Clark Memorial event.

The next two rallies were a disappointment. Lorna was well out of the top ten on the Manx Rally after a crash and associated problems and recorded a DNF in Ulster after a ball joint broke. Nevertheless, she picked herself up and saved her best overall finishes for the last two rallies of the season, both wet, slippery and difficult events. She was sixth on the Trackrod and seventh on the Tempest, gifting her the Ladies' Championship and third in Group N.

In amongst her travelling and rain-taming, Lorna also found time to nip back up to Scotland and co-drive for her father in the Speyside Stages, after he had read the notes so many times for her. They came 42nd in a Peugeot 205.

In 2006, Lorna appeared to be running a limited programme of rallies, and was not part of the Stobart setup. She was tenth in the Pirelli Rally in an Impreza, but does not appear to have entered any other rallies. Her website was not being updated since and she looked to have departed from the scene.

However, Lorna did reappear in 2007, driving a Suzuki Swift. She entered the British Championship and the Irish Tarmac Championship simultaneously, for the works-supported Dealer Team Suzuki. Her first BRC rally in the Swift was the Pirelli, in April. She won the Rally Two class and was ninth overall. She and co-driver Joanne Oakley were less fortunate on the Jim Clark Rally, hitting a tree on the first stage. However, they got to the end and still won their class, despite only finishing 23rd. They won class N2 again on the Isle of Man, but did not break into the top ten. The Ulster Rally did not go as well, and Lorna had to make do with just the Ladies’ award. She was 36th. In Yorkshire, she was 20th, fifth in Rally Two. The British season finale was the Wales Rally GB. Lorna was 20th again in the BRC standings, second in class N2. She became the British Ladies’ champion again and finished strongly in Rally Two.

In Ireland, it was a similar story. Lorna had the N2 crown in the bag before the end of the season.

Despite her strong class performances, Lorna’s Suzuki drive was only meant to be a one-year deal, before the team launched its WRC car, and the new customer group N cars, on to the market. Her contract was not renewed and she does not appear to have competed since.