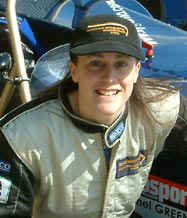 The Caterham 7 must be one of the most-raced cars in Europe after the Mini. Only a few years after she started racing, Rachel Green had become one of Europe's most accomplished Caterham drivers. She got started in the Caterham Academy, a programme of driver training, races and speed events organised by Caterham. Her Vauxhall-engined car was built by her father.

After coming through the Academy, Rachel signed up for the Caterham Graduates racing series in 2001. She showed she had pace immediately and was one of the front-runners. She finished the season ninth overall in the championship and rounded the year off with her first win. This was in a non-championship race at the tricky Spa-Francorchamps circuit, a favourite of Formula One drivers.

A second season of Graduate racing saw Rachel really gathering speed. By the second race she was on the podium in third. Second places followed, and then finally the first of four wins. One was a really superb showing at Anglesey; she waited patiently in third, before pouncing on the last lap to take the chequered flag. A win in the final round was enough to give her the championship. She was the first female champion in the history of Caterham racing.

Moving on for 2003, Rachel moved up to the Super Graduate class, and began the season at Silverstone the way she left off: with a win. The next round at Rockingham gave her a second place and fastest lap, and later in the season she scored a class win in the European Trophy. However, towards the end of the season things did not go well for the production manager from Surrey. A series of low finishes and DNFs dropped her to thirteenth in the championship.

She was not deterred though - in 2004 she was set to race in the Caterham R400 Eurocup, the fastest and highest level of Caterham racing. Rachel had always run well abroad and had won twice in France, so chances looked good for her. However, the season proved difficult and she was off the pace. Her highest finish was sixth, although she did manage one start from pole. She was tenth in the championship.

A reinvigorated Rachel contested the UK and European R400 championships in 2005. She totally dominated the Oulton Park meeting, winning the first race from fifth on the grid and pulling off a masterful lights-to-flag victory in the second. Unsurprisingly, she also scooped the Oulton lap record. Three seconds and one third, alongside her wins, were enough to take her to seventh in the championship. In addition to the Oulton Park lap record, she set unsurpassed lap times at Spa, an impressive achievement.

At the start of the 2006 season, other opportunities beckoned. Rachel's Caterham R400 was left to one side as she sampled more powerful cars. With former BTCC star Anthony Reid, she tested a Dodge Viper for Pouchelon Racing, and was on the pace straight away. The duo made a good partnership, and Rachel commented on how friendly the team were. The test led to a seat in the Pouchelon team for the first round of the European GT3 Championship at Silverstone. She started well and was sixth for a while, before tyre trouble dropped her to a solid twelfth in the first race. She and co-driver Luc de Winter had to retire after only four laps in the second, after being hit by another car.

Caterhams were not forgotten; Rachel had equipped herself with a Cosworth-engined Superlight and tackled the Caterham Eurocup. Her best result was third at Spa, followed by a fifth and a seventh at Donington, although competition was intense and she found herself battling for honours at the head of the pack on a number of occasions. She also did some Superlights racing in the UK, and normal service was resumed with two wins. She was sixth overall.

The season-ending Britcar 24 Hours saw Rachel's debut in a Mazda. The rotary-engined RX-8 had proved a competitive machine in earlier Britcar rounds and the Mazda works team entered three. Rachel shared her car with Richard Chamberlain and Andy Shephard, and was sponsored by the Financial Times, her employer. Unfortunately, she was hit from behind by a Mosler, and had to pull in for a lengthy pitstop. The car finished the race, despite crash damage and electrical trouble, and Rachel was shaken but unharmed.

In 2007, it was back to Caterhams. Competing in Superlights again, she won one race and finished on the podium eight times. This gave her second in the Superlight Challenge. For her achievements, she was awarded the Wakefield Trophy for the highest-performing woman in motorsport that year. She was also the BWRDC’s racing champion.

She returned to Superlights for the 2008 season, but was not as successful, with only four top-three finishes and seventh overall. However, this may have been due to the distraction of the other racing and testing in which she took part this year.

In 2008, Rachel made her second attempt on the British GT championship, driving a Team Modena Lamborghini Gallardo this time. She finished the race at Donington in fifth position, a marked improvement on her 2006 result. Her co-driver was Piers Johnson. Unfortunately, the Gallardo was only fit to start one race of the two-race meeting. The car also expired during the Silverstone and Donington rounds.

As well as British GTs, Rachel also paid visits to the British VdeV series, and the season-ending Britcar 24 Hours. She was second in class at Donington in VdeV, driving a Bicknell PS7. In the 24-hour race at Silverstone, she drove a Marcos Mantis to eighth in Class Two, 29th overall. She was driving for Topcats Racing. This year, she won a Gold Star from the BWRDC, and won its racing championship once more.

Rachel continued her association with Topcats in 2009, and made a move to the Britcar GT Championship full-time. She was driving the team’s first-string Mosler MT900R. Her first race was at Silverstone, and, despite a poor qualifying performance and a spin, Rachel was heading for a top-three finish when the car overheated. This dropped her back down to fifth. Her second race, at Rockingham, did not go to plan either. An innocuous-seeming crash into the Armco put her and her team-mate Luc Paillard out of qualifying, and they did not make the start.

Sadly, this was to be Rachel’s last race in the Mosler, as her funds were insufficient to allow her to continue to compete at this level. In between her Mosler trials, she made a guest appearance in the Silverstone round of Caterham Superlights. In her first race, she was fourth, but she spun off during the second.

She hoped to continue to race for Topcats as a third driver in the longer Britcar rounds, as she still had one sponsor, but this did not happen.

In 2010 she entered the Ginetta G50 Cup with Team GCR. She managed a fifth and two fourteenths at Thruxton, and a ninth, eighth and twelfth at Rockingham, before seemingly having to drop out of the series.

She does not appear to have raced since, and her website is no longer being updated.