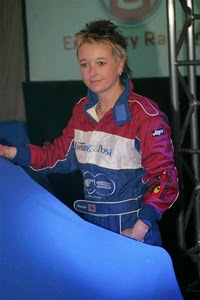 Paula, as an Embassy Racing driver

A Yorkshirewoman, Paula Cook was born in 1969 in Rotherham. She is the daughter of Derek Cook, founder of the DC Cook car dealership chain. Despite coming from a motoring background, she did not start her racing career until 1993, when she was 24. She wasted no time in her first year, winning every race during her driving course at the Jim Russell driving school. This was before she even had her full racing license!

The Formula Vauxhall Junior Winter series was the next challenge she attempted, in 1994. Again, she was on the pace immediately and came second in the championship. After this success, she launched an ambitious double-headed attack on British Formula Renault and Formula Three in 1995. She was supported partly by her father's DC Cook Motorsport team, and partly by Jonathan Lewis at Comtec.

In Formula Renault she showed some flashes of inspired driving, and at the Silverstone round became the first woman to qualify on pole for a Formula Renault race, breaking a lap record in the process. She was not quite able to convert her excellent qualifying pace into wins, but was eighth in the standings at the end of the season. On the Formula Three front, she entered two races, in preparation for a full championship campaign the following year. In one race, she managed fourth overall and a class B win. One of her rivals was Juan Pablo Montoya on this occasion.

Now fully supported by her family team, Paula entered more rounds of the 1996 British F3 championship alongside her brother, David. She was still learning the car, and this time did not challenge the frontrunners. In a one-off Renault Spider Cup drive at Brands Hatch, however, she did challenge, finishing runner-up in this competitive series. A trip to Europe for the Marlboro Masters at Zandvoort was not particularly fruitful though: Paula did not qualify for the race in her F3 Novamotor Alfa.

More F3 followed in 1997, still with DC Cook Motorsport. Another Yorkshireman, Guy Smith, had now joined the team. They were both driving Opel-Speiss-engined Dallaras. Paula's best finish was a seventh place at Pembrey, plus two tenths at Oulton Park and Thruxton. The car was not especially reliable and she failed to finish on a number of occasions. Guy Smith, who would later win at Le Mans at the wheel of a Bentley, also struggled at times.

Paula continued in F3 for another season, with the same result as 1997: 20th place. The 1998 British F3 grid now appears like a Who's Who of international racers, with the likes of Mark Webber, Mario Haberfeld and Nicolas Minassian involved.

At the end of 1998, Derek Cook decided to make a move into touring car racing. He took Paula with him. Driving a Nissan Primera, she was thirteenth in the non-championship Tourist Trophy. In a Honda Accord, she entered the last meeting of the BTCC season, at Silverstone. Here she was 16th in the Sprint race and twelfth in the Feature race. Although her performance was not startling, it was enough to net her the Independents' Trophy for privateer teams in the Feature.

The team tackled all of the BTCC rounds in 1999. Paula's car was a Honda Accord Super Touring. Unfortunately, the year was not a great success. She was hampered by car trouble on several race weekends, and often could not finish. This was blamed on DC Cook Motorsport's over-zealous tinkering and poor set-up skills, by some. When Paula did finish, she was usually near the back, although she did scoop a couple of points for her ninth place in the Silverstone Feature race, and tenth position in the Sprint on the Brands Hatch Indy circuit.

Following on from this unencouraging experience, Paula, now 30, left her family team and tried to raise finances to compete by herself, with less pressure. She signed up for the 2000 Autobytel Lotus Elise series and took part in a few races. However, cashflow problems reared their ugly head again, and she vanished from the tracks until 2003.

During her year out in 2002, she enlisted the services of Jonathan France as her manager. They formulated a plan for her to compete in the Porsche Supercup, but their main sponsor pulled out when Iraq was invaded, leaving Paula without a drive. She and Jonathan then managed to secure a seat in the 2003 SEAT Cupra Championship, a one-make touring car series with its own TV coverage. This would be a year in which Paula eased back into motorsport, without family pressure this time.

Unusually, there were three women drivers in the championship that year. Paula was easily the best of the three, consistently outscoring them. Her best finish was fifth overall, and she maintained a consistent, if unspectacular, midfield presence. Occasionally, she fell victim to the series' sometimes dubious and over-enthusiastic driving standards and was punted off at the start, after her best qualifying performance. She was eleventh in the points at the end of the season.

Paula and Jonathan had decided that sportscar racing was to be her target, as she had already tried touring cars, and had been out of single-seaters for too long. She got her chance in the summer, when she got involved with the works Morgan team. Partnered by Neil Cunningham, she was to drive in two rounds of the FIA GT Championship at Donington and Spa. She performed well in testing, but when the Donington race came around, the Morgan Aero 8 was not homologated in time. A disappointed team sat out the entire race weekend. The homologation papers were ready for the Spa 24 Hours and the team made the start, but the car had to be retired after only 45 laps following an accident. Through no fault of her own, Paula did not get to drive.

In 2004 she put her Morgan frustrations behind her and joined Jonathan France's own Embassy Racing team. She was reunited with Neil Cunningham to race a Chevrolet Corvette C5 in the British GT Championship. This time, they got to show what a good partnership they could make. At the first meeting at Donington they started badly, coming fourteenth in the first race after a poor pit stop. However, in race two they were a battling fourth. At Mondello they were consistently on the pace with a pair of sixths, but it started to go wrong at Snetterton. Problems put them down to thirteenth in race one, and the car was not fit to start race two at all. It was worse at Castle Combe, when the duo failed to finish the first race and then could not take part in the second. Oulton Park did not begin well with another DNF, but a seventh in the second race of the day was more positive. At Silverstone they were fifth and eighth.

Paula parted company with Embassy after the Silverstone races. Her place in the team was taken by Ben Collins at Thruxton and Richard Hay at Brands Hatch. At this time, I do not know why she was replaced and whether she is still working with Jonathan France.

As well as British GTs, Paula also raced in the Trophée Andros ice-racing series, in the kart-cross class. On separate occasions, she has tested for Formula 3000 and the ALMS.

She does not appear to have raced since 2004. Her father died suddenly in 2005, and she became a director of his DC Cook Direct dealerships. The company went into liquidation in 2009.