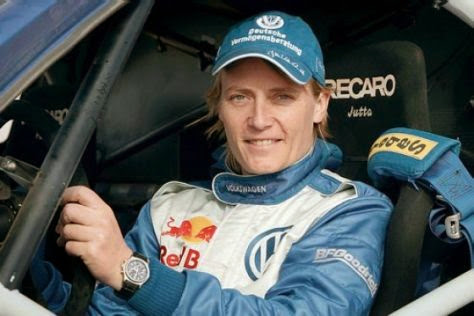 Jutta as a VW driver

Jutta is one of a select group of speedqueens who have gone all the way to the top. She is a recognised star in the field of cross-country rallying, one of the best-known drivers in her discipline. This is mainly down to her win in the world-famous Paris-Dakar rally in January 2001. Partnered by Andreas Schulz, in her works Mitsubishi Pajero, she fought off competition from the likes of Jean-Louis Schlesser and Carlos Sousa. 2001 has been Jutta's finest year to date; she scrapped with Schlesser for the FIA cross-country rally title all season, and came out with two wins and four seconds. Her other win came in the Italian Baja event, giving her back-to-back victories. She was second in the Morocco, Portugal, Master Rally and Por Las Pampas races.

She came into motorsport through engineering. Known as the "flying physicist" in her German homeland, she was a research engineer for BMW for several years. She became interested in rally raids through coverage of the Dakar on television. In 1985 she followed the event on her own BMW motorcycle, and by 1987 she was competing for real. To begin with she financed herself, but later she was supported by BMW, and then KTM. The Ladies' Trophy for bikes was hers on the Dakar, Pharaohs and Dubai rallies many times, between 1987 and 1996. She also circuit-raced bikes with some success, including an excellent win in the Clermont-Ferrand 24 Hour race.

Her introduction to cars came on the track, in the form of the Veedol Trophy. This is an endurance series contested on the old Nordschleife of the Nürburgring. Jutta first raced there in 1991. The following year she took part in her first rally raid, as co-driver to Jean-Louis Schlesser. In 1994 she began driving one of Schlesser's buggies herself, and was rewarded with second place in the two-wheel-drive category of the Cross-Country Cup. This arrangement continued until 1997, with increasingly good results, culminating in a stage win on the Dakar, a win in the two-wheel-drive class and a win in the prototype class in the FIA series. It is perhaps ironic that Schlesser, a former boyfriend of Jutta's, who was so instrumental in her early career, became one of her biggest rivals.

1998 began with some ice-racing in the Andros Trophy, which Jutta enjoyed immensely. That year she also became a works Mitsubishi driver and hooked up with Andreas Schulz. That season was mainly a learning one, in preparation for the next. 1999 opened brightly for the German pair, when Jutta became the first woman to lead the Dakar. She held that lead for three days but ended up third, the first podium finish for a female driver.

In 2000 she went one better and came second, in the Pajero again. Her career was really taking off and she finished the season first T2 and second overall in the Cross-Country Cup.

After her triumphant 2001 season, things started to go awry. 2002 began promisingly, although she was unable to catch team-mate Hiroshi Masuoka for a second Dakar win. She had caught up many minutes in her favoured desert terrain. However, in the middle of the season, Mitsubishi dispensed with the services of its German star and she decamped to Volkswagen, new to the rally raid scene. She was signed to develop the Touareg off-roader, with the aim of winning the Dakar in 2005.

Teaming up with Michèle Mouton's former co-driver Fabrizia Pons, Jutta again fought bravely in the Sahara to finish eighth in the 2003 Dakar. The Touareg was still under development and was lacking in pace. It was good enough for seventh place on the Italian Baja, though, and third on the non-championship Baja Deutschland. Jutta's development skills were also put to good use on the VW Polo Super 1600 rally car, which she drove as course car on the Rally Deutschland.

Staying with VW and Fabrizia Pons, she completed another Dakar in 2004, but finished just out of the top ten. A flooded engine sustained in rainy Morocco lost her many hours and could have lost her her late stage win. She ran the rest of the rally under appeal after being accused of illegally changing the Touareg's engine block. After a long discussion, she was allowed to remain in the standings, in 21st place.

Elsewhere, Jutta ran well. Although she was only thirteenth in the UAE Desert Challenge, she was fourth in the Morocco Rally and equalled her previous Volkswagen best in the Rallye d'Orient, coming third.

After the controversy of 2004, the 2005 Dakar ran much more smoothly for Jutta and Fabrizia. Again, they battled hard on the desert stages and finished third. That year, the Touareg was much more competitive and Jutta was in a position to challenge for wins again. She was fourth in Tunisia, third on the Morocco and Por Las Pampas events and second on the Baja Portalegre in Portugal.

The 2006 Dakar was her last race for Volkswagen. It was a disappointing one, as the Touareg could not make it to the finish. The official line was that the German star's contract was now over, and she had decided to move on, in search of more wins. Much later, Jutta admitted that she had had a serious disagreement with VW's sporting director, Kris Nissen, who was later arrested for sexual assault.

Mid-season, she announced that she was joining the now-dominant X-Raid BMW team. Her first event for them was originally to be the 2007 Dakar, after she decided that she didn't have enough testing under her belt to be competitive in the Pharaohs Rally, in October. However, a decision to enter the UAE Desert Challenge late in the season gave her a sixth place. Her new navigator was Tina Thörner, an old friend, as Fabrizia Pons had first decided to retire, then changed her mind and joined Ari Vatanen instead.

Jutta and Tina were 15th on their first Dakar in the BMW X3, after struggling with technical problems. Shortly afterwards, Jutta’s one-year contract with X-Raid expired, and she chose not to renew it. This meant that she did not compete for the rest of the season. She then announced that she was not going to enter the Dakar in 2008 either, due to a lack of a suitable car. This pre-empted the event’s cancellation.

In 2008, she pursued some different projects, including stunt driving work and helicopter piloting for a film in Tunisia. She also had a small acting cameo. In May, she returned to her native Germany again for the Nürburgring 24 Hours. She drove a BMW 330d with Thomas Haider, Rainer Kutsch and Marc Hiltscher. They were 60th overall, and winners of class S2. The previous year, the team had finished 153rd.

Jutta did not enter the South American Dakar in 2009, after failing to agree a deal with a suitable team. She kept a low profile for a while, but now, appears on TV quite regularly, and at awards ceremonies, including one where she was presented with a lifetime achievement award for her motorcycling endeavours.

Jutta made a return to rally raids in 2016, competing in the Cross-Country Cup in an X-Raid Buggy. Reunited with Tina Thörner, her first event, the Abu Dhabi Desert Challenge was fraught with difficulty. In a new vehicle, problems with wheels digging into sand, and mechanical gremlins, were an issue. Jutta finished the event in 23rd place. By the time the Qatar Sealine Rally came around, Jutta and her navigator, Philipp Beier, knew the car better. They were fifth overall, and won the 2WD class.

Jutta was elected President of the FIA Cross-Country Commission in 2019, after having served on the Women in Motorsport Commission as a talent scout.