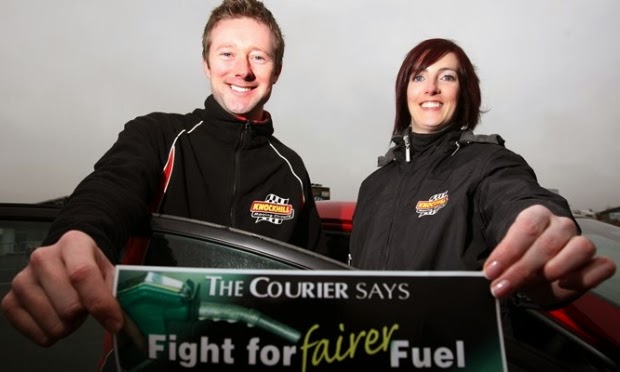 Jillian with her husband, Gordon Shedden

Having your father own a racing circuit cannot be a handicap for a driver. Jillian Butcher insists that she does not get much private practice time, but will admit to some after-hours racing sessions.

Most of this Scottish lady's racing career has been spent under Ford power. She started out in the Scottish XR championship in a Fiesta XR2, in 1997. For the following year she purchased a Fiesta Si which she used in both the British and Scottish Si championships. She finished the season with the Si Ladies' and Scottish cups. After this triumph, Jillian did not rest on her laurels, but used her sponsorship deal to contest the Ford Credit Fiesta Zetec Winter championship, where she really excelled. She was fourth in the rankings, with a best finish of second and two pole positions.

Having proved herself in the Zetec machine, she raced in the main Fiesta championship, which supported the British Touring Cars. Her best finish of 1999 was a fourth place at Silverstone. This was a really superb drive in pouring rain, where she battled up from seventeenth on inappropriate slick tyres.

For a change, the young Scottish driver switched to single-seaters for 2000. She raced a Van Diemen to top-five finishes in the Scottish Formula Ford championships and also took in a few Junior Formula Ford Zetec races south of the border.

It was back to tin-tops the following season, with Jillian securing a drive with the Cafe 21 team for the Fiesta Zetec championship. She was a consistent midfield finisher this year and came eighth in the championship. One of her more impressive drives was at Knockhill, again in the wet.

For a while, Jillian stuck to her day job as Knockhill's company secretary, but in 2003 she was invited to race a new Mini Cooper at the Scottish circuit as a guest driver in the John Cooper Challenge. It was here that she claimed her first win.

Nothing more was heard from this Scottish lady for over a year. In 2005 she married her long-term partner, Gordon Shedden, a BTCC driver. They met while racing each other in the Fiesta championship. Later in the year, the couple entered a round of the EERC Britcar series, driving a Ford Focus together, and Jillian made another comeback.

For 2006, she planned to contest the whole of the Britcar season in the Focus. She competed in Class Two of the Production S1 series, with Lawrence Laybourne as her team-mate. Her results have proved elusive.

At the start of 2007, she was linked to a drive in the Clio Cup, with Jamie Cleland Racing. However, the team disintegrated before the start of the season proper, and Jillian was left without a ride. She seems to have spent the rest of the year concentrating on her job as a director of Knockhill, a role she had now taken over from her father.

Eventually, she returned to her Formula Ford roots. In 2008, she was sixth in the SMRC Formula Ford 1600 series, competing against her younger brother, Rory. Jillian was a consistent finisher, hovering around the top five in most of her races. She continued to take part in Scottish club Formula Ford in 2009, as well as overseeing a number of innovative activities at Knockhill, including a Superbike street race.

(Image from www.dailyrecord.co.uk)
Posted by Rachel H-G at 13:42