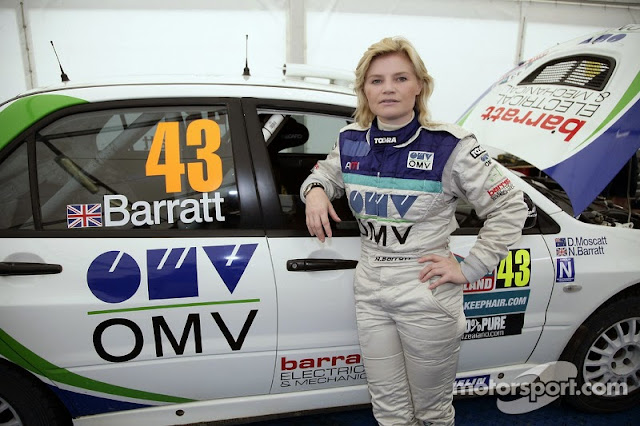 "International rally driver" is not an obvious career choice for a 5'2" girl with dyslexia, who sometimes struggles with the concept of left and right. However, Natalie Barratt is not one for doing things the straightforward way - that would be too easy.

Born in 1975, Natalie was initially drawn to circuit racing, and her first year of four-wheeled competition was spent racing a Peugeot 306 and a Fiesta XR2 at club meetings. She had become friends with then-Formula One driver Marc Gené, and he had encouraged her to take the wheel. She started rallying a year later, in 1996, taking part in the Nissan Micra Rally Challenge.

The following year she bought a Group N-spec Honda Civic and stepped up to the British Rally Championship. Her co-driver was the experienced Joyce Champion. Natalie's results were not overly impressive: her best result was 32nd overall on the Manx Rally.

The Civic was upgraded to class A6 specifications for 1998, but it did not help Natalie in her hunt for results. Reliability problems meant that she only finished one BRC rally, the Welsh, in which she was 37th. A drive in a Mitsubishi Lancer in the RAC Rally was more promising. She was 38th and second in the Ladies' standings.

Teaming up with Stella Boyles, she tackled another two WRC events in 1999, Sweden and Great Britain. She was 54th in Sweden and 36th on her home rally, with her first Coupe des Dames. In the domestic series, things were looking up for Natalie; the Lancer Evo 4 was much more to her liking and faster than the Civic, and she had gone from backmarker to respectable midfielder. She was 22nd on the Welsh Rally, 25th on the Pirelli, 17th in Scotland, 22nd on the Jim Clark Memorial Rally, 31st in Ulster and a career-best 13th on the Isle of Man.

With her confidence higher, Natalie now had her sights firmly set on the international stage. Still using the Group N4 Lancer, she entered five WRC rallies. Sweden was a poor start to the year, a DNF, but she was 33rd in Corsica, 38th in Spain, 39th in Finland and 36th in Great Britain. In between the Finnish and British rounds she also took part in the Rally of Australia, driving a Les Walkden Racing Impreza. She did not finish again. Away from the WRC, she braved the sub-zero temperatures of Rovaniemi in Finland for the Arctic Rally, in which she was 47th, in another Mitsubishi.

For 2001, Natalie dropped all extracurricular activities and concentrated firmly on the WRC. She signed up for the Group N-based FIA Teams' Cup and entered ten rallies. Her only distraction was a Rallysprint event in Austria.

She had the use of two Lancers that year, an Evo 5 and an Evo 6. She started in Sweden with the Evo 5, where she was 29th and eighth in Group N, a career best so far. A change of co-driver, from Trevor Agnew to Australian Claire Parker, brought no more luck for the Portugal Rally, and the pair retired after a nasty-looking accident. They dusted themselves down and did three more events together: Catalunya (34th), Cyprus (21st) and Acropolis (35th). The Cyprus event was Natalie's best performance to date, possibly of her career, as she was eighth in Group N and scored her first FIA points. These were the first female points for five years. Natalie also had to contend with unwelcome male attention in Cyprus, which could have put her off, but obviously did not.

Later in the season, she was 57th in Finland, 36th in New Zealand and Australia and retired from the Sanremo and Great Britain rounds. She finished the year fifth overall in the Teams' Cup standings.

After much chopping and changing in the navigator's seat of Natalie's car, she found a regular co-driver at last. The experienced Roger Freeman sat beside her for 2002, in a Mitsubishi Lancer and later in a works-prepared Hyundai Accent WRC. Only a small handful of women have driven WRC cars, and there was some outrage in rallying circles over Motor Sport Development's decision to work with Natalie, who was considered a weak driver and somewhat undeserving.

As the Accent suffered mechanical problems on three of the five rallies it was entered into, it is quite hard to judge her performance. In the two events it finished, she scored decent enough positions, but was behind most of the other WRC contenders: 21st in New Zealand and 22nd on Rally GB.

Ironically, the two outings she had in a Group N Lancer were more productive. She was only 51st in Sweden but was 26th in Cyprus and seventh in Group N, her best class finish.

In 2003 she only entered a few rallies. Her main activity that year was a sabbatical in circuit racing. She was driving in the new SEAT Cupra Cup touring car series, a junior tin-top challenge which was followed closely on a TV programme. Natalie was probably more noteworthy for her pink hair and eccentric in-car habits (mainly talking loudly to herself), than for her racing. She scored a few points, but was unable to mount much of a challenge to the others. Her final position was seventeenth in the championship.

During that summer she took part in a couple of rallies. Going back to her BRC roots, she and Roger Freeman drove a Toyota Corolla WRC in the RSAC Scottish Rally. They went out on the second stage with mechanical difficulties. This proved to be a sad end to their rallying partnership; Roger was killed in an accident on an American rally a month later. The driver, Mark Lovell, also died.

Natalie was scheduled to drive in the Malaysian Rally that August, in a Subaru, but did not make the start.

It was back to rallying full-time the following year. Natalie had a new co-driver, Carl Williamson, and a new plan. She entered the Junior World Rally Championship for 1600cc two-wheel drive cars, first of all in an MG ZR. She and Carl drove in the IQ-Jänner Rallye in Austria as a pre-Monte Carlo warm-up but crashed out. Natalie's first Monte Carlo was no better; she retired on stage three. The MG ZR plan was abandoned and she was back in a Lancer for Rally New Zealand, a Group N Evo 8 this time. She was 32nd.

Another JWRC-eligible car was found for the Acropolis Rally, a Renault Clio. This proved to be less than reliable and only made the end of two rallies: Finland (34th) and Sardinia (23rd).

Again, Natalie returned to Group N in the WRC, now renamed the Production Cup. She was reunited with the Mitsubishi Lancer, a car in which she had had most of her good results. Pre-season, she and Carl Williamson had another go at the IQ-Jänner Rallye, but suffered another off. A little later in the season, they returned to WRC action as part of the successful OMV Rally Team. Their first event was New Zealand in a Lancer Evo 7. They limped to the end of the event but were classified 37th. For Cyprus, Natalie upgraded to an Evo 8, but she didn't finish this time, hitting a bank and barrel-rolling in another bone-crunching accident. In the same car, she just scraped another finish in Turkey, classified 46th. At this point, her reputation with the UK motorsport press and a vocal group of fans, was less than favourable. Earlier in the season, she had attempted the Welsh Rally, a BRC round, and retired on the first stage again.

After Turkey, Natalie and Carl parted company. He navigated for Finnish driver Jari-Matti Latvala later in the season. For the Rally of Argentina, Natalie changed car as well as co-driver. Still with OMV, she switched to an Impreza WRX, with John Bennie. She retired yet again.

Navigated by Chris Patterson this time, she managed a decent 30th place in Rally Finland. For her last three rallies of the season, she teamed up with Tommi Makinen's former co-driver, Kaj Lindström. Again, some questioned his decision to sit beside her. They were 41st on Rally GB, retired in Japan and were 34th in Australia.

Natalie has often been criticised by fans and the press. She has been accused of squandering good drives, like the MSD Accent deal and her stay with the OMV team. She is seen as something of a chancer and is not popular with many UK rally fans. Although some of the criticisms of her may be valid - her finishing record in 2005 and her perceived lack of progress for instance - some of the more personal insults directed at her are unpleasant and unjustified.

In 2006, she did some rallying in Scandinavia, away from the WRC scene. She was 28th in the Arctic Rally in January, beating former F1 champion and occasional rally driver Mika Hakkinen. In February she was 43rd in the Vaakuna-Ralli in Finland. She was driving an Impreza on both occasions. She made a brief return to the WRC stages for OMV in Finland and New Zealand. She was 32nd in Finland but retired from the New Zealand Rally with gearbox trouble. Her co-drivers were Chris Patterson and Dale Moscatt respectively. The car was an Impreza in Finland, but a Lancer in New Zealand.

In 2007, Natalie relocated to Finland with the aim of competing full-time in the Scandinavian championships. She entered that year’s Rally of Norway in a Group N Impreza. She does not seem to have finished. It is not clear whether or not she competed in any further Finnish rallies, but it looks like she may not have managed it.

Natalie's website has not been updated for some time and her future plans are unknown, although she did reappear briefly in 2011, to drive in the POP Pankki Rally in Finland. She was 24th in a Subaru Impreza STi, co-driven by Peter Flythstrom.

(Image from www.motorsport.com)
Posted by Rachel H-G at 14:11