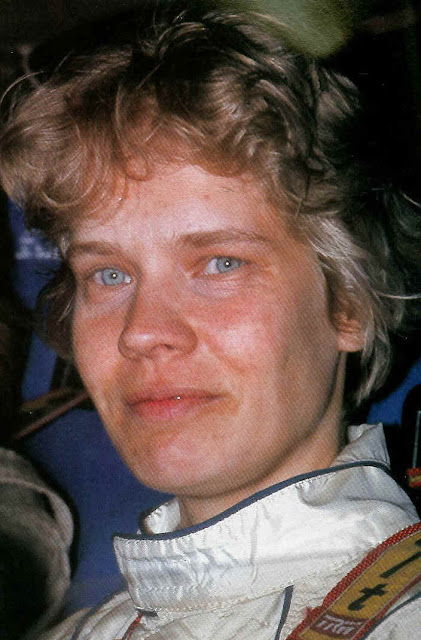 Following a career that stretched from the early 1980s to the mid-1990s, Minna Sillankorva has earned the reputation as one of Finland's finest women rally drivers. Finland is famous for its rallying, and there have been a few notable female contenders since the 1970s, so the accolade is well-earned.

Minna was born in August, 1961. In common with many of her countrymen, she started her rally career young and took part in her first 1000 Lakes Rally at 21, in 1982. Co-driven by Johanna Nieminen, she was 28th in her Ford Escort RS.

She won her first major award in 1983; the Ladies' Cup of the Finnish national rally championship. For national events, she had been using an Escort RS2000, but for the 1000 Lakes she drove a Mazda RX7. She and Johanna were 36th overall but won their class for the first time.

The connection with Mazda continued the following season. Switching between the RX7 and a smaller 323, Minna won her second Ladies' Cup. She chose the 323 Turbo model for her first Monte Carlo Rally and was supported by the Japanese marque's European works team. She and Johanna were 22nd, eighth Group A car, and third in class A8. Later in the year they were 42nd in the 1000 Lakes event, with the same class position.

Minna's third Finnish Ladies' Cup was won in 1985, using the RX7 and the old familiar Escort RS. She drove an RX7 prepared by Haka-Auto for the 1000 Lakes Rally, but did not make the finish. In the same, or a similar, car, she was 26th and third in class in the South Swedish Rally. It was sometime during this season that she played a small part in rally history, by selling the future four-times world champion Tommi Makinen his first rally car.

1986 went very similarly to its predecessor, with Minna winning the newly-retitled Finnish Ladies' Championship in her RX7. Again, she did not finish the 1000 Lakes Rally. She also made the first of a series of outings to the UK, and was 43rd in the Scottish Rally. Her co-driver was Arja Haimikainen. Her programme of events is hard to follow here, but it included the 24 Hours of Ypres.

Minna stayed loyal to Mazda for the 1987 season, but changed her RX7 for a newer 323 4WD. She also changed co-driver, working with Timo Hantunen for the 1000 Lakes Rally. The new pairing did not finish, but Minna won her second Ladies' Championship, and helped Mazda to the Finnish Championship for Makes.

At some point during 1987, she made a trip across to the UK, to drive in the Scottish and Welsh rallies there. Her co-driver was the Englishwoman Mary Fullerton. I have been unable to track down the results.

1988 was not a good year for Minna, now 27. She and Timo Hantunen failed to finish the 1000 Lakes yet again and she lost her Finnish Ladies' crown to Carita Toivonen. She regained the Ladies' title the following year but was unable to recapture her early form on the 1000 Lakes.

In 1990 she struck up a partnership with the Italian co-driver Michela Marangoni. They began with an unsatisfactory year in the Mazda 323, but then raised their sights dramatically for 1991. The 323 was abandoned in favour of a Lancia Delta Integrale 16v, prepared by the Astra team. The pair embarked on an ambitious programme of selected World Rally Championship rounds, beginning in Monte Carlo. At this point, they still had the 323, but it was out to good use for a career-best 18th position. The Lancia was ready in time for the Acropolis Rally in the summer, but they were less lucky this time, going out with a turbo problem on Stage 42.

In July, they travelled across the Atlantic for the Rally of Argentina. It proved to be a trip well worth making; Minna finished in a strong tenth position, an all-time career-best result for her and her first WRC Drivers' point. That year's rally was a tough event with a high rate of attrition, but the Finn kept going and was close to the time of Gregoire de Mevius, in ninth.

It was back to Finland in August, for Minna's tenth attempt at the 1000 Lakes event. This time she was 22nd, her best finish on her home rally and the best of her career. Her WRC programme continued with the Catalunya Rally in Spain, but she withdrew from the competition after the first stage. Her reasons are unknown at the time of writing. She and Michela were scheduled to enter the RAC Rally at the end of the season but also withdrew for reasons unspecified. Despite these two late setbacks, Minna was rewarded with the title of FIA Ladies' World Rally Champion, successor to Louise Aitken-Walker. She was 62nd in the drivers' standings.

After her adventures in 1991, Minna's career went very quiet. Her compatriot Eija Jurvanen won the FIA Ladies' crown in 1992 and a succession of other Finnish female talents took her place in the national ladies' championship. Her only notable rally activities were entries into the Arctic Rally in 1993 and 1994, in the 323 4WD. She was eleventh in 1993, but did not finish in 1994. On this occasion, the drag racer Anita Mäkelä served as her navigator. During this time, she took up rallycross, and competed in the European Championship in 1994. She drove a modified 323 in Division Two.

She did not return until 1996, when she reclaimed her title of fastest female Finn in an Escort RS2000. For the 1000 Lakes, her last WRC rally, she drove a Mitsubishi Lancer Evo 3, supported by the Finnish arm of the Mitsubishi Ralliart works squad. She and Michela Marangoni were 26th, tenth in Group N.

Although she did not compete in any more 1000 Lakes Rallies, it was business as usual in 1997, with another Finnish Ladies' title sewn up in the RS2000. She had another quiet year in 1998, losing out to her much younger namesake, Minna Lindroos, but recaptured her crown in 1999. This time she was driving a Honda Integra, which gave her two top woman driver awards at the Asikkalan OP-Ralli and the Fenno-Ralli. She was second lady at the Tommi Makisen Talviralli.

After another career lull, Minna reappeared in 2003, driving more for fun than for gain now. She had acquired a BMW M3 prepared to Group F regulations. Group F is unique to Scandinavia and is a high-speed, highly-modified class which runs at the back of the field. Minna and her co-driver Jari Jyrkiainen finished the rallies of Tampere and Osuuspankki comfortably.

The following year, she was reunited with an old friend: the Escort RS2000. Showing she had lost none of her touch, she was tenth in the Vanajanlinni Rally, co-driven by Sirpa Salmikuukka.

Since then, Minna does not appear to have competed seriously. She now works as an ice-driving instructor in Finland.

(Picture from TuttoRally magazine, April 1994. Thanks to Jorge Taborda.)
Posted by Rachel H-G at 14:06