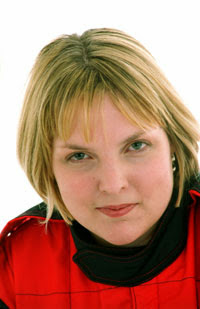 Although SEAT no longer ran its works rally team, one driver still flew the flag for the Spanish marque in Britain in the 2000s. 2002 British Ladies' Rally Champion Kate Heath and her SEAT Ibiza were a familiar sight on British Championship rounds, and the name lived on in her rally team's name.

Rallying is something that Kate and her husband Paul have always done together. They first started spectating at the 1991 RAC Rally, and have been fans ever since. It took a while for the pair to make the jump from spectators to competitors, but they did it in 2000. After a few road rallies as warm-up, Kate, navigated by Paul, entered the Tour of Lincolnshire in a 1.3l Skoda Felicia. This was their local rally, and they acquitted themselves well, finishing third in class. Kate's confidence increased steadily during her first year, and ended it with a class win on the Bulldog Rally, and her club's Stage Rally Championship.

Unfortunately, foot-and-mouth disease prevented most rallies from taking place the following year, so Kate had to sit it out. She returned in 2002 with plenty of ambition, making another leap, from club competition to National competition. In what was only her second year of rallying, she won the Ladies' Cup and came close to winning class A7 in the British Championship, leading for much of the season. The competition in this class was fairly small, but Kate was never complacent and always went for the points.

After a very positive 2002, 2003 was somewhat of a letdown for the Lincolnshire team. Mechanical gremlins plagued the car and too many non-finishes dropped Kate to third in the Formula 2000 class. The Ladies' crown went to Shelly Taunt. In spite of this, Kate remained upbeat, was enlisted to write a column in Motorsport News, detailing her trials and tribulations, and remained a popular figure in the paddock.

Undeterred, she returned to the British Championship. She expected for a better year in 2004, having moved up to a Subaru Impreza Gp N car, and gained more experience of the rallies. Her lack of car experience meant that she wasn't yet ready to challenge for class honours, but she and Paul finished every round, apart from the Trackrod Rally in Yorkshire. Kate's best finish was probably early in the season, on the Welsh Rally, where she was 34th, but above several other competitors.

Kate kept the Impreza for the 2005 season. Again, she was more steady and consistent than spectacular. Her form picked up towards the end of the season, and she was 29th on the Isle of Man and 26th in the Ulster Rally, beating Coupe des Dames rival, Lorna Smith. Her best overall result was on the Trackrod, where she managed to hang on to twelfth while many others fell by the wayside.

A more competitive Kate reappeared for the 2006 BRC. She had a new co-driver in the shape of Simon Mills, as Paul was away on RAF duty. They started well with a 25th place on the Pirelli Rally, out of 35 finishers. The pair were 38th on the Jim Clark Memorial Rally and 37th on the Manx, again as part of a much bigger field. They continued to place in the lower midfield for the rest of the season. Kate’s first entry to a World Championship rally came at the end of the season, on the Wales Rally GB. Sadly, she did not finish.

Alongside her driving activities, Kate also ran Hotseat Motorsport, which is both a rally team and a rally driving school. In 2006, the team expanded to two cars after Glenda Boyle's arrival. Glenda was the winner of the "Women In The Hotseat Rally Challenge", a competition organised by Kate in order to find a female rally champion. The Challenge was intended to be a yearly contest.

Away from motorsport (just!), Kate has appeared on Channel 4's Scrapheap Challenge programme, where she and her team had to construct a boat out of junk. She also seems to have contributed to an academic publication about women and technology, supported by Leicester University.

Kate’s current competition plans are unknown. She has not competed since 2008, when she drove the Impreza to 49th place in the Malton Forest Rally, in Yorkshire.