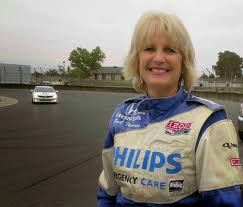 To European readers, Gail is something of an oddity; an American rally driver. Rallying has a small but growing following in the United States and Gail is one of its best-known stars, famous for her "Tango" orange Mazda 323.

Gail's rallying career began at the wheel of an Oldsmobile Omega in 1985, in club events. She steadily improved as a driver in her first few seasons and was challenging for club honours by 1988. That year she was second in the Central Division Rally Championships and third in National runoffs. Further afield, she also came second in class in the National Rally of Jamaica.

As her profile became higher, offers of works-supported drives started to appear. In 1991 she drove for the Skip Barber-run BMW team in the One Lap of America event. The following season she was selected by Subaru as their representative in the Winter Alcan 5000 snow rally. A return to Jamaica in 1993 brought a class win.

After a quiet couple of seasons, Gail was back in General Motors machinery, in the SCCA US Championships now. Driving a Chevrolet Citation with Jimmy Brandt, she was thirteenth overall in the 1996 Lake Superior Rally, one of her best results of the year. As well as stage rallying, she was now also competing in the PPG Neon Challenge on the track, for a change. She continued her on-track activities in 1997 as well as stepping up her rally challenge. She teamed up with sportscar racer Pattie Hughes as co-driver, and the first evolution of her orange Mazda 323 made its appearance. In the four-wheel-drive GTX they were sixth overall in the Open class of the US championships, with a good result of tenth in the Lake Superior rally. This was formerly known as the Press On Regardless Rally and is one of America's most prestigious international rallies. Gail was also eighteenth in the Seven Islands Rally in Maine with Pam McGarvey, and an excellent fourth overall in the Finger Lakes and Tioga Rallies, co-driven by Ben Greisler.

Back in the Mazda with Pattie for 1998, Gail's results carried on improving. They were seventh in the Ojibwe Forest rally, fourth at Lake Superior (with a win in the Production GT class) and second in the Headwaters event, which was good for sixth overall in Production GT at the end of the season.

By 1999 Gail and Pattie were real contenders. In that year's Snodrift Rally they were battling for the outright lead with Tom Ottey, but they were denied victory by an overheated engine which pushed them right down the timesheets. In the Rim of the World Pro Rally, they were 16th and second in class, behind the similar car of Doug and Susan Robinson. They achieved the same class position in the Susquehannock Trail, but were seventh overall. In the Wild West Rally, Gail and Cindy Krolikowski won the PGT class and were sixth. They were Production GT champions at the end of the year.

After that, the "Tango" Mazda became a familiar feature of the US rally scene, as "Girls Kick Butt Racing" achieved consistent good finishes. With sponsorship from Gail's own rally car preparation firm, improvements were made to the car to bring it up to speed in 2001, and it competed in the GT class. After her 1999 heartbreak, Gail managed a solid fourth position in the 2003 Snodrift Rally and was back in contention for a full season in 2004, alongside Pam McGarvey once again. They came eighteenth overall, sixth in the Open class.

After twenty years rallying is now Gail's life, with her until recently full competition calendar, car preparation firm and automotive industry sales and training consultancy. She was also a member of the elite all-female PPG pace car team for the CART Champiosnhip, and as of 2008, the official IRL safety car driver. She has resumed her safety car role for the Verizon Indycar Series.