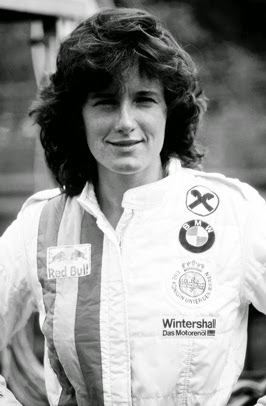 Austrian Mercedes Stermitz, born in 1958, pursued a career as an international beauty queen until 1984, and was a contestant in Miss World. Surprisingly, she managed to combine some Austrian club racing with her pageants, but it was not until she hung up her tiara, at the end of 1984, that she began to race seriously.

The Ford Fiesta Ladies' Cup was her first destination in 1985. She campaigned her Fiesta XR2 around Germany and its neighbouring countries for two seasons, before making the jump up to mixed competition in 1987.

Prior to start of this season, Mercedes formed a competitive partnership with the German driver Annette Meeuvissen. Together they entered the ITC World Touring Car championship, using a BMW M3 provided by the Schnitzer team. The season was not a huge success: they failed to finish at Jarama, the Nürburgring, Brno, or the Bathurst 24 Hours. In the second Australian race at Calder, they were seventh, showing that when they kept it on the track, they had the speed. Sadly, they could not follow the finish up and went out of the Wellington round as well. Certain sections of the media jumped on Mercedes's over-enthusiasm and high-profile crashes; one magazine printed the headline "Mercedes Bends BMW", which stuck in a lot of people's minds, and probably annoyed Mercedes a great deal.

The Schnitzer team also entered her into her home round of the European Touring Car championship too, at Zeltweg. The series was playing second fiddle to the ITC that year, but still attracted some decent drivers. Mercedes and Annette kept out of trouble to finish seventh again. Seven must have been their lucky number, because they were seventh once more in the Spa 24 Hours, driving another M3 for the Linder team, with Gerrit Kouwen.

Spa was not the only 24-hour race that Mercedes and Annette did that year. Later in the season, they entered the Nürburgring 24 Hours with fellow female racer Ellen Lohr. Away from saloon competition, Mercedes also took part in one German Formula Three race, for Mönninghof Racing. She finished, but was not in the points.

After a year of close competition with Anette at her side, Mercedes decided to go it alone in 1988, concentrating on single-driver events. Her main focus was that year's DTM championship. She was competing against Annette this time, as well as established stars such as Roland Asch and Johnny Cecotto. The season started unremarkably at Zolder; Mercedes steered her M3 to a 22nd and 17th place and managed to keep out of trouble. She kept up the momentum at Hockenheim, coming a steady 22nd and 18th. Her first retirement of the year occurred during lap five at the Nürburgring, but she made it back out for the second race and was 24th. At Brno in the Czech Republic she was 27th and then 16th, one behind her former team-mate, but at Avus failed to finish again, this time ruling herself out of the second race as well. Following damage to the car, she also sat out the next three meetings at Mainz, the Nürburgring and Norisring.

Her return, at the Wunstorf airport track, yielded the best DTM result of her career: a ninth overall, followed by a 15th. She was much more on the pace and was on the same lap as the winners both times.

Salzburg would have been her home race, and she had performed well in Austria before, but both races were halted early on due to a series of accidents. No points were awarded. She was a disappointing 24th at the Hungaroring and then did not attend the Hockenheim finale, for reasons unknown. She was 34th in the final points table, and although she had shown some flashes of promise, this was her only season in the DTM. Her only other race of the year was another one-off drive in German F3, this time for the Walter Lechner Racing School team.

In 1989 she took part in some more German F3 races, contesting the B class in a Dallara F388.The results have proved impossible to track down, but it is unlikely she made much impact, or it would have been commented on. Mercedes was a very newsworthy driver in her heyday, albeit usually for the wrong reasons. Her only other activity this year was a guest spot in the Rothmans Porsche Turbo Cup, driving a 944.

It was back to sportscars in 1990, although F3 had not been forgotten. Mercedes made a token appearance in a works Eufra, before getting down to business with endurance racing. Her racing programme was ambitious, taking in the Montreal round of the World Sportscar Championship with Team Davey. Their car was a Porsche 962, which unfortunately did not make it to the end of the race. Earlier in the season, she was set to drive a Spice-Ford for the British Chamberlain operation, but the car did not make the start at Silverstone.

Despite the team's poor showing at Montreal, Mercedes stayed with them in 199,1 for her most high-profile appearance yet: the Le Mans 24 Hours. In a stroke of poor luck, Mercedes, along with her team-mates Val Musetti and Katsunori Iketani, narrowly missed qualifying for the classic French race. The Austrian promptly jumped ship and joined the established Kremer Racing team for the next round, the Nürburgring 430km race. The move paid off, as she and Otto Rensing steered a different 962 to eighth place overall.

Single-seaters had not been abandoned completely in 1991. Mercedes moved up a formula to F3000 in the UK, driving a Lola T89/50 for McNeil Engineering. She was only entered for the Oulton Park race and the car's clutch gave up after only seven laps.

Incredibly, she made a switch to open-wheeled competition full-time in 1992. As well as bringing up the rear of nine German F3 races in her Dallara-Alfa Romeo, she took part in the Formula Three Masters race at Zandvoort. Driving for Jacques Isler Racing, she was 23rd overall. Later in the season she flew to Argentina for a non-championship F3000 race at Temporada. Her GJ Motorsport Reynard did not make the finish.

It is hard to say whether Mercedes's career would have picked up again after a decidedly disappointing 1992. In truth, she was denied the chance to redeem herself by a severe road-traffic accident in 1993, which she was lucky to survive. Although her racing career was well and truly over, she did make a full recovery. After concentrating on family life for a time, she has appeared as a guest on German-speaking TV occasionally.