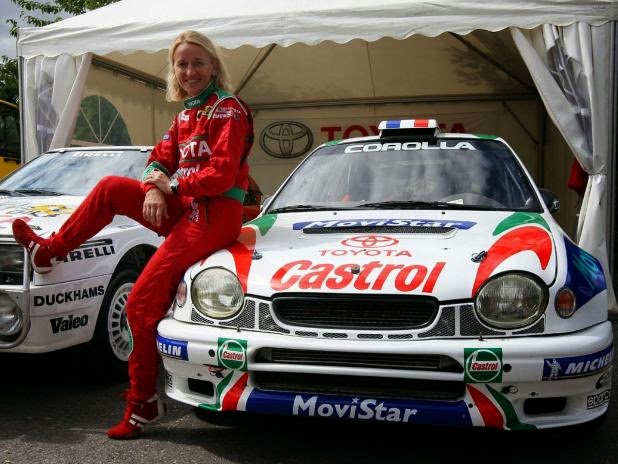 German Isolde Holderied was probably the fastest woman in Europe in the 1990s. She is one of a tiny, elite few to have been a member of a works team, and to have come close to winning an international rally.

In some ways, she picked up the baton left by Michéle Mouton in 1986. Isolde's first steps in motorsport were navigating, then driving, an Opel Corsa, with a friend of her father's, in local club rallies. Her team-mate suggested that she enter a driving competition in the newspaper Bild am Sonntag in 1987, which she duly did. At the end, she was the winner, having been judged the best of a thousand hopefuls. Her prize drive was a season in the Deutsche Rallye-Trophäe as part of the Ladies' Junior Team. She was given an Opel Kadett and made good use of it, finishing fifth in class G in the Trophäe and second in the subcategory for events in Bayern.

The following year she and the Kadett returned to the Trophäe. They were sixth overall this time and also sixth in the German Junior Championships.

Now partnered by Monika Eckhardt, Isolde switched back to a Corsa in 1990, although this time it was a Group A GSi version. It proved no problem to her and she scored four class wins in the Rallye Trophäe. She and Monika also experienced their first foreign rally, the Budapest Rally in Hungary.

After four years of loyalty to Opel, Isolde and Monika switched allegiances to Japanese power in 1991. They were invited to join the AM-Holzer Motorsport team for that year's German Rally Championships, driving a Mitsubishi Galant. Isolde did not disappoint her new team bosses, bringing home the Ladies' Trophy and fourth place in Group N. Her best result was fourth overall, in the Niedersachsen-Rallye.

She continued with the Galant in 1992. To open the season, she scored the first of her six Coupe des Dames victories on the Monte Carlo Rally. She and Dagmar Lohmann were 19th overall and seventh in Group N. Later in the season, Isolde made her Rally Finland debut and was 21st, eighth in group N, with Klaus Wicha.

Away from the World Championship, she was still running in the German series with Monika Eckhardt. She won Group N in the ADAC Rallye Deutschland, coming sixth overall, and was Group N runner-up in the Hunsrück event. Her outright position was seventh. Both of these rallies were European Championship-standard events, and at the end of the season, Isolde was not only German Ladies' Champion, but European Ladies' Champion and European Group N champion as well.

In 1993, she finally gave up her day job in a legal practice and became a full-time professional rally driver. She had linked up with a new navigator in the shape of Tina Thörner, Louise Aitken-Walker's former co-driver. Their main focus was the German series, in which they were running a Group A Galant. The high point of the year was winning the Nidersachsen-Rallye outright, a first for a female driver in Germany. This alone was enough to secure the German Ladies' title again, but she followed it up with third in the ADAC-Rallye Hessen. Isolde also defended her European crown and her Coupe des Dames on the Monte. It was her only WRC outing, but she made a good impression with twelfth overall and third in Group N.

Having tasted some limited WRC success, it was now time to make a concerted effort on the world stage. Isolde and Tina attacked seven WRC rallies in 1994, driving a group N Mitsubishi Lancer, supported by Mitsubishi Germany. They started with an RS, and claimed another Coupe des Dames on the Monte straight out, coming fifteenth, and fourth in Group N. Following this was an eleventh place in Portugal, sixteenth in Corsica and a highly-impressive eighth in Argentina. Isolde was either fourth or third in Group N on all of these events.

She changed to a newer Lancer Evo 2 for Rally Finland, but only managed 29th to begin with. This was made up for in the next round, Sanremo, where she won group N ahead of her team-mate, Jorge Recalde. The season finale was the British round, where Isolde was fourth in class, fifteenth overall.

Looking back, 1994 was probably her best year. She won her first FIA Ladies' World Championship and more importantly, was ranked in the end-of-year drivers' standings for the first time. Her crowning achievement was her second place in the FIA Group N series, not far behind the winner, Jesus Puras.

She and Tina did seven more WRC rallies together in 1995, still in the Evo 2. They were tenth in Monte Carlo, scoring a single point and scooping yet another Coupe des Dames. Eleventh in Portugal was enough for third in class and they were Group N runners-up in Corsica, despite only managing nineteenth in the overall standings. A suspension failure in New Zealand meant a rare retirement, then Australia was a little disappointing. Isolde finished nineteenth but was only ninth in Group N, against opposition with better local knowledge. She did not finish the Catalunya Rally after an accident.

She was fourth in Group N in Great Britain, fourteenth overall, but this was not enough to repeat her class heroics of last year. She was third in the final leaderboard, behind Recalde and Rui Madeira.

Another change was in order. Isolde started working with a new co-driver, Cathy François, and joined a new team, Toyota. She spent the 1996 season away from the world stage, driving the Group A-spec Toyota Celica GT-4 in the German championships. She had not lost her touch in her homeland, and was fourth overall. Her best results were a third in the Hunsrück event and fifth in the ADAC Rallye Deutschland.

Isolde was now easing herself back into WRC action. She claimed her fifth Coupe des Dames on the 1997 Monte Carlo Rally, driving the Celica. Overall, she matched her previous best result with eighth place. In the German championship, she kept up her usual workrate with a number of top-five finishes, including a repeat of her 1996 results in Hunsrück and the Rallye Deutschland.

Her second stab at WRC stardom was given a knock by Cathy François's decision not to compete in 1998. She was pregnant and sat out the entire season. Isolde teamed up with Anne-Chantal Pauwels, a veteran navigator from France who had previously partnered François Delecour. Despite the fact that the pair were driving a WRC-spec Toyota Corolla, their partnership was not successful and they only finished two of the five events they contested together. Both of Isolde's WRC entries, Acropolis and Corsica, fell into this category. Their only good result was a second place in the Hunsrück Rally. With Tanja Geilhausen in the passenger seat, Isolde managed a fifth in the ADAC 3-Stadte Rallye.

Despite her poor season, Isolde continued with the Corolla in 1999. She was now supported by the Castrol Toyota works team and had the services of Cathy François once more, for part of the season at least. They were part of the official works entry for the Monte that year, and carried off the Coupe des Dames yet again with a thirteenth position. Isolde's team-mate Didier Auriol was third, after Colin McRae was disqualified.

The other three events she drove in were as part of the satellite Toyota Team Germany. She was 19th in Catalunya, 23rd in Corsica and 28th in Sanremo. These were her last WRC rallies, and it is a shame that she was unable to get better results out of the Corolla.

Away from the WRC, she was eleventh in the Rally Vinho de Madeira in Portugal, and second again in Hunsrück.

She stayed with Toyota in 2000, contesting a series of European Championship rallies. Her new co-driver was Heike Feichtinger, as Cathy François was now retired. Their first event together was the Rally Albena, which they did not finish. However, after that, their season picked up. They were eighth in the Rajd Polski and fourth on the Rallye Deutschland. They were also fourth in Hunsrück and Halkidiki, and fifth in Turkey.

For the last two rallies of the year, Uta Baust co-drove for Isolde. They proved to be a good team, coming third in Piancavello, Italy and fourth in the Rallye d'Antibes in France. Isolde had done enough to finish fourth in the European Championship, her best European finish.

She only took part in one rally in 2001, the ADAC Rallye Deutschland. It was being evaluated for WRC status so many elite drivers entered that year. Isolde was eleventh in a Step 2 Corolla WRC.

This was her last international rally. After that, she reduced her motorsport activities and became mother to Niklas, with her husband Andi.

Despite marriage and motherhood, Isolde has never given up motorsport. She remains an employee of Toyota, now as a brand ambassador. She has been involved in testing and driver training for some years now and appears at a variety of Toyota functions. More recently, she has taken more of an active role. She took part in the 2006 Toyota Yaris Cup circuit racing series, as a driver and an instructor. In a partial return to rallying, she has co-driven a Toyota 2000 in classic events, usually alongside Dietrich Hartmann.

In 2012 and 2014, she drove Toyotas as the course car driver on the ADAC Rallye Deutschland. Five years later in 2019, she drove a Corolla WRC as part of the Eifel Rally Festival.

Away from motorsport, she still enjoys adventure, travelling to the Arctic regions for sporting challenges once a year and climbing mountains with her family. In addition to this, she plays the clarinet in a brass band.

(Image from www.autozeitung.de)
Posted by Rachel H-G at 13:32