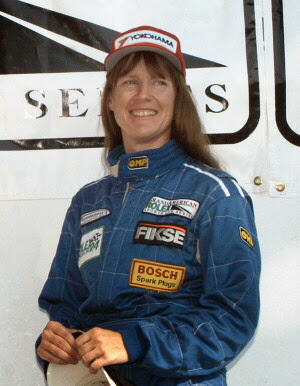 Despite having a relatively short racing career and starting fairly late, Kim Hiskey has achieved a lot. She began racing seriously in 1998, at the age of 34 and after having two children. Previously, she had dabbled in rallying as a teenager, and been an enthusiastic spectator.

Her first season was a runaway success. Entering club events in her home area of Seattle, she scooped four SCCA titles and was named the Northwest Novice of the Year and Most Improved Driver.

In 1999, she took a big step up in terms of competition, taking her Porsche 911 RSR into the ALMS sportscar championship. She entered three races in all, two for The Racers' Group and one for Fordahl Motorsports. Both Racers' Group efforts, at Portland and Laguna Seca, ended in mechanical failures. Her co-drivers included Kim Wolfkill, Kevin Buckler and John Hill.

Kim and John Hill joined Fordahl Motorsports for the last race of the season at Las Vegas. The move paid off; assisted by Steve Valentinetti, they came 24th overall, eighth in class.

Her first major race win came this year. With the aid of two other Seattle drivers, her "Crazy Redhead Racing" Porsche was the winner of the Timex 12 Hours of Thunderhill.

Kim continued her association with Fordahl in 2000, moving into the Grand-Am series with the Porsche 911 RSR. One of her team-mates was Randy Pobst, and they raced in several events together. At her first race at Phoenix, Kim and Steve Valentinetti were fourteenth overall, third in class. An eighteenth at Mid-Ohio with Randy Pobst gave her another class third on her next outing. The same driver pairing was 22nd at Daytona in a Porsche 996 Cup car. At Watkins Glen, back in the 911 RSR, they were 20th. The only real negative that season for Kim, was failing to make the start for the Road America race, partnered by Linda Pobst.

In addition to her Grand-Am activities, Kim also found time to pilot another 911 RSR for Alex Job Racing in the ALMS. She was 22nd at Portland with Douglas Hebenthal, and 20th at Las Vegas with Grady Willingham, securing another SCCA regional class runner-up prize in the process.

2001 saw a move from the 911 RSR to a 911 GT3, the fastest production GT Porsche in the range. Kim first piloted it at the Daytona 24 Hours for White Lightning Racing, alongside Hugh Plumb, Michael Petersen and Michael Culver. They were tenth, at the time one of the highest-ever finishes for a team with a female driver.

For her other races that season, Kim teamed up again with Randy Pobst and Fordahl Motorsports, now running as a joint effort with her own Crazy Redhead Racing team. It was a momentous year for the crew, as they earned two GT class wins early on, at Phoenix and Road America. They were fifth and eighth overall respectively. The Lime Rock round gave them another strong overall finish, sixth, although they were not the leading GT entry this time. They then captured the GT pole at Mid-Ohio and ended the race fourth in class, but only 16th overall.

The two Watkins Glen races were a letdown. For the first, Kim was paired with a different co-driver, Altenburg, and came 36th. Back with Randy Pobst later in the year, she hardly fared better, coming 27th. However, the season finale at Daytona gave the pair another GT class win, plus a twelfth place. This was good enough to put Fordahl/Crazy Redhead Racing fourth in the end-of-season table.

Hoping to repeat her triumphs, Kim returned to Grand-Am in 2002 for a part-season. Daytona was not a success; Kim, Randy, Spencer Pumpelly and Steven Ivankovitch limped to the end of the race and were 73rd, for Pumpelly's Zip Racing team. Things brightened up in Miami, where Kim and Randy were seventh, third in class. Reunited with the Fordahl/Crazy Redhead GT3 for the Phoenix round, they were a strong tenth. However, Kim took part in no more Grand-Am races that year, although Randy Pobst appeared in a few.

Crazy Redhead Racing seems to have vanished from the scene in 2003, along with Kim. She reappeared in 2004 to take part in some national racing, alongside some old colleagues. Fordahl and a revived Crazy Redhead Racing entered a team into the SCCA's 25 Hours of Thunderhill race, consisting of Kim, Randy Pobst, Albert Loredo, Dave Welch and Greg Fordahl himself. Driving a Porsche, they won convincingly.

In 2005, Kim took part in the SCCA Norpac championship, driving solo. She was back in the RSR and came ninth in the GT1 class. She also did some Oregon regional races, assisted by Fordahl, with decent results.

She does not appear to have raced in 2006 and her website has not been updated for a long while. In 2007 at least, she was running a custom motorsport decal business.

(Image from http://mujerestuercas-marilischwander.blogspot.co.uk/)
Posted by Rachel H-G at 14:15