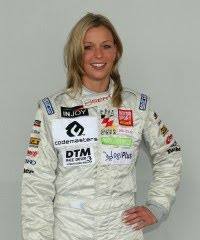 Katrin Droste was formerly a successful karter in her native Germany.

Early on in her senior career, she competed in one-make racing. After her debut, a guest start in the 2003 Alfa 147 Challenge, she made an impact straight away, winning a Mini Challenge event at Salzburg in 2004. This was her first full year of car racing. She ended the season in eighth.

For the next three seasons, her principal car was a SEAT Leon. In 2005, she took part in eight rounds of the German SEAT Leon Supercopa. This was a learning year, and she was 30th overall. In addition to this, she entered the VLN championship at the Nürburgring, and drove in the 24-Hour race. With Cathi Felser, Steffi Halm and Nicole Lüttecke, she drove for Mazda in their RX-8. Mazda were using female drivers extensively to promote the car at that point. The four were 55th and in fourth in class. Cathi, Steffi and Kati drove the same car together in regular VLN rounds.

Driving solo, Kati also revisited the Mini Challenge and entered the Vodafone Maserati Trofeo as a guest driver. Her team-mate was Mario Kossmehl.

In 2006, she mostly stayed with SEAT power, contesting the SEATLeon Langstreckenmeisterschaft that ran as part of the VLN. She was seventh overall, with one podium finish, a second place. Her co-driver was Kathi König. The pair entered the Nürburgring 24 Hours in the same car, with Christina Surer and Cathi Felser making up the rest of the team. They were 62nd overall, but second in the SP3T class. As well as racing in Germany, Kati was called up by Mazda to compete in the Dubai 24 Hours in the RX-8. The 2005 team were reunited at the desert track, but this time they failed to finish.

A quieter year followed. Kati competed in the SEAT Leon Supercopa in Germany, and made a short series of guest appearances in the Peugeot 207 Spider Cup in France. Her best result in the Peugeot prototype was eighth, at Monza. She was 20th in the final SEAT standings, her position not helped by a string of DNFs late in the season, and a serious accident in the last round.

In 2008, she raced in the German-based Sports Car Challenge, and its sister European Sports Car Challenge, run as part of the French VdeV series. Her car was a BMW sports-racer. She was on the pace immediately, finishing fourth and second in her first two races at the Nürburgring. However, along with co-driver Mirco Schultis, she could only manage fourteenth in the European round at Magny-Cours. They were tenth in the 100-Mile race at Hockenheim, despite suffering brake problems.

In 2009, Kati returned to Dubai for another go at the 24 Hours. She was in an Audi TT and assisted by Marcel Leipert, Jan Slooten, Jorg van Ommen and Mana el-Attar. The race did not start well, as the team lacked the money needed for testing, and therefore struggled in qualifying. Problems with the brakes and the rear axle did not help. Despite this, they worked their way up to 31st overall, and sixth in class.

At this point, Kati's aim was a full-time driver. This eluded her in 2010, and she returned to karting temporarily. She funded her racing through working as a fitness professional and fashion model.

In 2011, she did some races in the Porsche Endurance Cup in Germany, alongside Bertram Hornung. They won the six-round championship together.

She does not appear to have raced since 2012, and her personal website has been taken down.