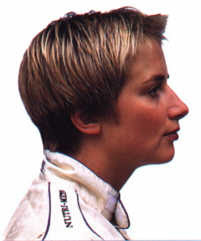 During the mid-1990s, most of today's current Formula One drivers were battling through the junior ranks. Battling against them was a Danish girl called Kirsten Kolby, whose career sadly never hit the same heights.

Looking back on Kirsten's racing pedigree, there is little to be sad about. She started competing in Britain in 1993, in touring cars. That year she came sixth in the British Group N Saloon championship in a Honda Civic run by Mardi Gras Motorsports.

Single-seaters beckoned for the next season. She drove in several championships, but her best result came in the British Formula Vauxhall championship, where she was seventh. The series was no walk in the park, with the likes of Darren Manning and 2003 Le Mans winner Guy Smith taking part. She also competed in the Formula Opel Euroseries, and scored top-ten finishes alongside Tom Coronel, Jamie Davies and Ralph Firman. Trying a different formula, she also came fourth in a Nations Cup race at Zandvoort, sharing her Formula Renault with fellow Dane Henrik Larsen.

Kirsten has raced in Formula Ford, Formula Vauxhall, Formula Opel Lotus and Formula Renault, against formidable opposition. A couple of her most noteworthy scalps from 1994 to 1997 include F1 drivers Alex Yoong and Juan Pablo Montoya, who rated her highly and quipped that she "wasn't bad for a girl".

She returned to Mardi Gras in 1997 for a part-season in the Renault Spider sportscar trophy, competing across Europe. One of her best finishes in this well-supported series was a sixteenth place at Monza.

After surviving a serious accident, during which her car turned over and caught fire, she retired from motorsport.

After hanging up her helmet, Kirsten was involved with her family-run racing team, who were then running her brother Kristian. Both she and her sister Ellen are now employed by the Williams F1 team.