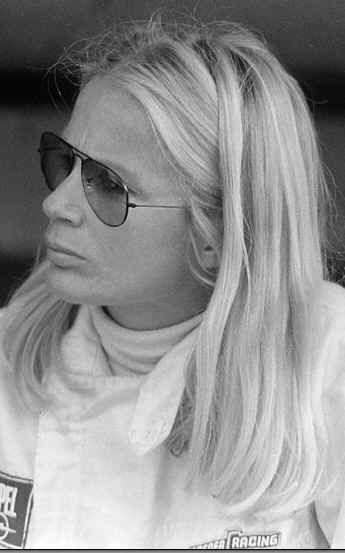 Frenchwoman Marie-Claude was involved with cars and motorsport from a young age, as her father was a rally mechanic and occasional competitor. In her teens and early twenties, she accompanied him in his service van on the Monte Carlo Rally, which ran through her hometown, Gap. She also acted as an English-French interpreter and guide to visiting drivers, having spent time in England. Later, she drove a recce car on the stages and reported back on weather conditions.

When her own competition career began, Marie-Claude changed her family name of Charmasson to Beaumont, to avoid any suggestion of nepotism on her father's part.

It was while she was helping out at the Monte Carlo Rally that she got her start in motorsport. In 1963 she was befriended by Claudine Vanson-Bouchet, the French rally champion of the time. Claudine was impressed by her driving and navigational skills and when she needed to recruit a new co-driver in 1964, she asked 23-year-old Marie-Claude. They were a good team, driving first for Citroen in a DS19 and later in a Lancia Flavia. The partnership lasted until 1965, when Claudine switched back to the navigator's seat with her husband.

Mid-1965, Marie-Claude was again hired as a navigator, this time by Henri Greder, another French champion. His car was a Ford Mustang, and the pair rallied it throughout Europe once again. Although she enjoyed being part of a rally team, she longed to drive herself. Eventually, she got her wish. Pierre Ferry, a member of the NSU team, offered her a seat in an NSU 1000 for the Critérium des Cévennes rally that year. After a battling finish through a blizzard, winning the Coupe des Dames, she was taken on as a works driver by the team. The following season, she competed in fifteen rallies, picking up Coupes des Dames and class awards regularly.

1967 continued in a similar vein, although as well as rallying for the NSU team, Marie-Claude took her first serious steps into circuit racing. Along with Christine Beckers, another all-rounder, she drove through heavy rain and thick fog to win the Production class of the Spa 24 Hours. They were the first female finishers. It not the best time to be a woman in the upper echelons of circuit racing; organisers were still wary of accepting their entries after the negative publicity surrounding Annie Bousquet's death more than ten years previously. There were no such problems in rallying, however, despite Marie-Claude’s coming-together with another car on the Monte.

1968 saw something of a breakthrough for Marie-Claude. Driving the little 1000cc NSU, she scored her first top-ten overall rally result, a tenth on the Tour de Corse. She and Christine Beckers were then sixth in class on the Tulip Rally. She also found time to co-drive for Henri Greder in Monte Carlo. Nevertheless, she was not resting on her laurels. Henri Greder had nicknamed her "Jamais Contente" (never satisfied) and his teasing held more than a grain of truth. She wanted to drive more powerful cars and challenge for outright wins, of which she believed she was capable. She was also getting tired of her subordinate position within the NSU team, and resented her car being cannibalised for parts when team-mate Gérard Larrousse's vehicle suffered a breakdown.

Henri Greder, who always supported Marie-Claude in her racing activities, ended up being the answer. He started up his own team for the 1969 season, with support from General Motors. His erstwhile navigator was his lead driver, using a series of Chevrolet and Opel models for rallying and racing. Although she was not quite challenging for the overall lead yet, she made do with the French Ladies' Rally Championship. In the main standings, she was eleventh. Among her achievements was the Coupe des Dames in Corsica, in an Opel Kadett, and a 17th in Monte Carlo, driving a Commodore. Driving a Chevrolet Camaro with Michèle Dubosc, she was eleventh in the Tour de France too, with a 2000cc Touring class win.

On the rally side, she did even better in 1970. She held on to her French Ladies' title and improved her overall ranking to fourth, after a series of good places. Her car this year was an Opel Commodore or GT. She and Martine de la Grandrive were 22nd on the Monte, tenth on the Stuttgart-Solitude-Lyons-Charbonnières event and eighth on the Rallye de Lorraine. With Marie-Madeleine Fouquet, she was fifth on the Tulip Rally and eighth on the Rallye de Génève.

Her main car in 1971 was an Opel Ascona. Martine de la Grandrive co-drove her to class and Ladies' wins on the Mont Blanc rally, a Coupe des Dames on the RAC Rally, and a somewhat disappointing 25th on the Monte, in an Opel Commodore this time. In the Ascona, they were ninth on the Alpine Rally. The same pairing were eighteenth in the Tour de France and won the class for Touring cars over 3000cc, driving a Chevrolet Camaro. They finished the year with a third French Ladies' title, and sixth overall.

Marie-Claude's track career took another leap forward during that season. The French motorsport authorities finally relaxed their position on female competitiors, and accepted Greder Racing's entry for Le Mans. Henri and Marie-Claude were to drive a Corvette, and finished fifteenth in the early-season 3-hour race at the Sarthe track. It was the first time a woman driver had taken part since Gilberte Thirion in 1954 and blonde, glamorous Marie-Claude attracted her fair share of publicity. In the race itself, the Corvette lasted until the fifteenth hour before giving up with engine trouble.

A similar car developed oil pressure problems during the Paris 1000km race later on in the season. Both Greder drivers fared better at the Opel GP at the Nürburgring; Marie-Claude was sixth in the three-litre class in a Commodore and Henri won the Group One class in a smaller version of the same car.

Her adventures in endurance racing continued in 1972. Again, she and Henri qualified and were accepted for Le Mans in a Greder Corvette. They lasted until the 21st hour this time, before an accident put them out. Driving with Rosadele Facetti this time, Marie-Claude was invited to take part in the legendary Targa Florio. Frustratingly, an engine failure put the Opel GT out of the running part-way through. Marie-Claude had more luck at the Tour de France, where she was fifth overall in a Corvette with Christine Giganot. During the year, she also drove in a number of European GT races for Greder, including one at Estoril which she did not finish.

The rally side of her career was flourishing. Her first event of the year was the Monte. Driving an Ascona, she was twelfth in slippery conditions which accounted for over two hundred of the original entrants. She did even better in Corsica, matching her highest finish in tenth. The RAC Rally was not as big a result, but she and Christine Giganot still came away with a respectable 27th. In the Spanish RACE Rally, the same pair were fifth in the Commodore. With a co-driver named Pignard, Marie-Claude was sixth in the Lyon-Charbonnières event, in an Ascona.

Marie-Claude's rallying career hit somewhat of a rut in 1973. She failed to finish most of the major rallies she entered, due to a series of technical faults with her Ascona, and the Opel Commodore for which it was sometimes substituted. These included the Tour de Corse and the RAC Rally. Her only real highlight, on this side, was her class win in the Commodore on the Tour de France.

Circuit racing was a different matter though; Henri and Marie-Claude recorded their first Le Mans finish in their Corvette that year. In addition to their maiden chequered flag, they were twelfth overall and first in the class for GT cars over 5000cc. That year, Marie-Claude also raced in a series of national events in a Lola T290 prototype, eager to make progress in her sportscar career. Her best result seems to have been an eighth place at Magny-Cours.

After 1973, circuit racing became the main part of her motoring activities. Still with Greder Racing, she and Henri entered the French Group 1 Championship for touring cars in Opel Commodore GSEs. After wins at Croix-en-Ternois, Paul Ricard and Montlhéry, Marie-Claude was runner-up to Henri in the final standings. She finished in the top three of all but one of the races she entered. Away from the Greder setup, she raced an Alpine A440 prototype around France for Ecurie Elf Switzerland. Her best result was a win at Montlhéry, which helped her on her way to the French Ladies' Circuit Racing Champion's title that year.

Rallying had not been forgotten either. A Renault 16 TS was her mount for the East African Safari in 1974. The engine gave out before the end of the event and Marie-Claude joined a host of others on the lengthy DNF list.

1975 saw her switch completely to the circuits and move away from Greder Racing. She was a member of the Ecurie Elf Ladies' team for the European rounds of the World Sportscar Championship and was piloting an Alpine A441 prototype, the next evolution from the one she had campaigned previously. The Elf managers had paired her with Lella Lombardi, the Italian Formula One hopeful and sportscar expert. Their partnership was difficult at first; Lella came from a single-seater background and had vastly more experience of the circuits and of powerful sports prototypes than Marie-Claude, who was principally a rally driver. Their personal outlooks also clashed to start with. Marie-Claude, although very serious about her motor racing, was perhaps more of an "adventuress" and general sportswoman than Lella, who ate, drank and slept motorsport. Despite her ambitiousness during the NSU and early Greder years, Marie-Claude was not always certain that she was the exact equal of a male driver. Lella, on the other hand, believed this passionately and was a strong feminist. 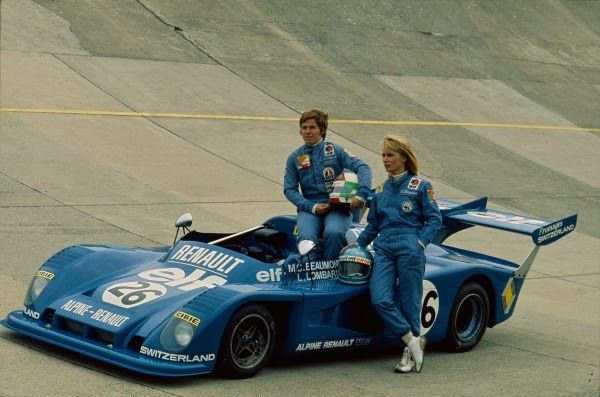 Once the duo put their differences to one side, they worked well as a team. The 1000km event at Mugello was their first together, and gave them a sixth place. Their best performance came at the Monza 1000km, where they were fourth and winners of the 2000cc class. Mechanical problems put them out of the Dijon, Pergusa and Zeltweg races. Le Mans was another disappointment; they ran out of fuel during the eighth hour.

A long-distance excursion to the Bathurst 1000 in Australia proved very worthwhile that year; Marie-Claude won her class with John Leffler, driving an Alfa Romeo 2000 GTI. Her sixth place remains the joint highest female finish in the classic Australian race.

At the end of the season, Marie-Claude showed signs of emulating her Italian team-mate. She tested an Elf Formula Two car at Vallelunga, despite having no previous single-seater experience.

She did not take up Formula Two in 1976. Instead, she raced a BMW3.5 CSI in the French production car championship. She fared well and came away with two wins, at Paul Ricard and Dijon. After her 1975 success, she made the trip Down Under again for Bathurst. Sadly, she and Christine Gibson did not finish in their Alfetta GTAM. Her sixth and final stab at Le Mans led to a finish, however. She, Bob Wollek and Didier Pironi were nineteenth overall in their Kremer Porsche 934, fourth in the GT class and one position ahead of Marie-Claude's former team-mate Lella Lombardi.

1976 was her last full year of competition. Marie-Claude did some rallycross for Alpine-Renault and tested some other cars in 1977, but by now she had thrown herself into her new career in PR for Renault. She stayed at the Renault press office for a time, before making another career change and starting work as a freelance race photographer. She is still an F1 photographer to this day, or was until very recently.
Posted by Rachel H-G at 13:46