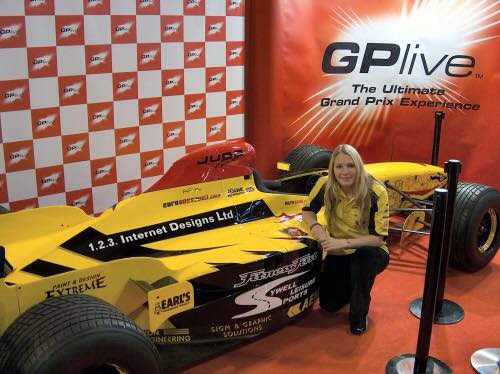 Jodie with the Jordan

Formula Honda (now Jedi) is a well-supported budget single-seater formula in Britain. Former karter Jodie started racing in the series in 2002. In her debut season she was the first-ever female Formula Honda driver.

She began in the 600cc class, and scored top-ten finishes from her first race. Mid-season, she sustained a broken wrist in an accident, which put her out of several races, but she soon bounced back. Even with the enforced break, she finished the season twelfth out of twenty-three drivers.

Still with the 600cc Jedi car, Jodie returned to Formula Honda in 2003, and was a permanent fixture in the upper reaches of the top ten. Her best finishes were two second places, and she won the Scholarship Trophy for 600cc cars. She also tried out a few Monoposto races, a multi-marque single-seater series, and raced well, against much more powerful machinery.

For 2004 she secured sponsorship from Sywell Leisure and continued in Formula Honda, which was now renamed Formula Jedi. Now fully conversant with the 600cc machine, Jodie dominated her class completely, winning every race she entered (fifteen out of fifteen) and beating a number of 1000cc competitors in the process. The opposition was no pushover either, with as little as half a second between the top six.

After her stellar season was over, as well as collecting trophies from the BRSCC and the British Women Racing Drivers' Club, Jodie took part in some exciting testing. She had a 160mph run in a Jordan F1 car at Silverstone, with a view to racing in the EuroBOSS pre-2001 F1 series in 2005. Unfortunately, this deal did not come off, so she returned to her trusty Jedi Mk4 instead, after pondering a move to the 1000cc class and deciding against it.

2005 was something of a let-down for the Northants girl. She was unable to catch eventual champion David Hodgson and only scored one win, at Pembrey. Her five second places were enough to secure second place though, as no-one else could catch Hodgson either.

Over a year after her initial Formula One test, Jodie got back into a top-flight car again in 2006. She had secured enough sponsorship to compete in at least the British round of EuroBOSS. Her car was a Jordan fitted with a 3.5 litre Judd V10, as its original engine was too difficult to source parts for. At the first meeting of the season at Brands Hatch, she was fifth in the first race and a strong third in the second, equalling Sarah Kavanagh's previous best position. She was determined to take part in more rounds and a win was touted as a possibility.

As well as her post-historic antics, Jodie signed a deal to run in some rounds of Formula Renault too, entering the championship at Croft. Her start to the season was not good, marked by a couple of retirements due to gearbox troubles. She managed a 15th and a 20th place at Donington, and was 23rd and 21st at Silverstone. This left her well down the final points table.

She managed to enter five EuroBOSS races in 2007. A blown engine put her out of the first meeting at Hockenheim, which should have been her first European race meeting, but she was back on track at Donington. She was third again in the first race, but did not finish the second due to car trouble. The story was reversed at Snetterton: she was unable to start the first race after gearbox problems in qualifying, but did start the second. Unfortunately, she spun off. At the Champ Car meeting at Zolder, she was back on the pace and finished fourth. However, the Jordan proved unreliable again at the Ronda Superprix, and she did not compete at all. She also had to sit out the season finale at the Nürburgring. Despite her trials with the car and its engine, she was tenth overall.

In 2008, she intended to do some more EuroBOSS races, but these did not happen. Instead, she competed in Formula Palmer Audi for the whole season. Despite her expertise in single-seaters, she never really got to grips with the FPA car and she was not particularly competitive. Her best result was eleventh, at Oulton Park. She was 22nd in the final standings.

Although Jodie was linked with more EuroBOSS drives, these did not happen. The EuroBOSS series itself is now defunct. In 2009 and 2010, Jodie returned to Formula Jedi for a few races, but was far from being one of the frontrunners.

Her activities between then and 2013 are unclear. She did not race at all, and at some point, she  became a mother, to two girls.

In 2013, she reappeared on the scene, as a driver coach, and as an occasional driver. She did a couple of Formula Jedi races, but was not quite up to her former pace.

She made guest appearances in the 2014 Renault Clio Cup Road Series in the UK, alongside one of her mentees, Jessica Hawkins. She was fifth and fourth at Oulton Park.

At one point, in her day job, this Northamptonshire resident drove bulldozers and diggers on a construction site!

(Image from www.facebook.com/jodiehemmingracing)
Posted by Rachel H-G at 14:00