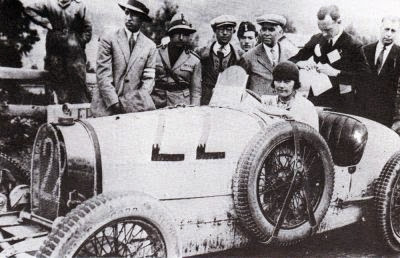 Margot at the 1928 Targa Florio

A contemporary of Elisabeth Junek, German noblewoman Margot (or Margaret) Einsiedel was one of a small group of major female racers in the late 1920s and early 1930s.

She usually raced either in her native Germany or in Sicily, and was also an accomplished hillclimber. She held the Ladies' Record at the challenging Klausen hillclimb from 1927 until 1932, fending off challenges from other talented ladies like Madame Helle-Nice in the process.

1927 was the year she started racing in earnest, in a Steyr VI Sport. That season she was fifth in the Eifelrennen at the Nürburgring and won her class at Solitude. She and the Steyr were sixth overall.

For the following season Countess Margot acquired a Bugatti T37, and switched the focus of her racing activities to Italy. She crashed out of the Premio Reale di Roma but escaped injury, and failed to finish the Coppa Etna. However, she came away from that race with a fastest lap as a consolation.

Sicily did give her a good result on the Targa Florio, where she came twelfth and sixth in the Voiturette class. Her achievement was perhaps overshadowed by the heroics of Elisabeth Junek that year. She was also entered into the Grosser Preis von Deutschland at the Nürburgring, but the bearings failed on her Bugatti. This again was overshadowed by the fatal accident to Elisabeth Junek’s husband and her subsequent retirement.

Margot carried on racing her Bugatti into the early 1930s, mainly at the Nurburgring and Solitude. After the Second World War, she married her third husband Harold Rydon and settled in Africa.

Margot is sometimes confused with another German racer, Bea Gilka-Bötzow, who was part of the Einsiedel family, and sometimes styled as the Countess Einsiedel. She also drove a Bugatti.


(Image from www.bugattibuilder.com)
Posted by Rachel H-G at 14:46