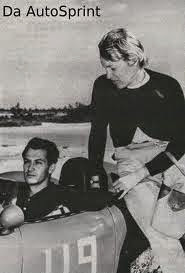 Isabelle with Alejandro (in car)

Beautiful, blonde American Isabelle Haskell always much preferred the style of continental cars to the brutish muscle-cars of 1950s America.

She was the daughter of a sometime racer and US motor industry veteran, Amory Haskell. He was involved in motor racing, but his real passion was horse racing. He led the US Jockey Club and founded a track in New Jersey. The Haskell family was wealthy and well-connected and Isabelle enjoyed a privileged upbringing with her siblings. She was presented as a debutante at Tuxedo Park, New York, in October 1948. The accompanying newspaper reports describe her own skill as a horsewoman.

Isabelle began racing herself in the early 1950s, first in a British MG TD and then in an imported Siata 300BC sports model. She got into cars and motorsport through her friend Daphne's elder brother, on whom she had a major crush. At first she was happy with driving her MG on the road; she only began racing in 1953 when encouraged by her employers in Florida. Her father did not approve.

It was in this car that she scored her first significant results in the US championships, with a best of fifth in a handicap race at the Lockbourne road circuit in 1953.

She continued in national and regional competition for another season with the Siata, and then moved on to another Italian car, a Maserati 150S, in 1955. That year she drove at the prestigious Nassau Speed Week in the Bahamas alongside international stars such as Mike Hawthorn and Stirling Moss. She shunned the ladies' races and entered the main draw, coming sixteenth in the Governor's Trophy and 21st in the Nassau Trophy. Closer to home, she became the first woman to race at Sebring in that year's 12 Hours, although she and Dick Irish failed to finish in their Bandini. They were classified 57th. The Siata was retained and used in a few SCCA races, but with no significant results. She decided to try her luck in Europe and set about getting a British racing license. The motorsport authorities in Europe were still more positive about female participation than their counterparts in the States. In 1955, she practised at the Modena airfield circuit in the Maserati, in preparation for a race at Senigallia, although the result of that race seems to have been lost.

At the time of her Italian trip, her brother spoke to the US papers and told journalists that Isabelle was taking the next step in her racing career to prove to someone she could drive, and that the "someone" was their father.

By this time, Isabelle had developed a preference for longer endurance races, and she tasted her first international success in 1956. She and Carlos Lostalo came seventh in the demanding Buenos Aires 12 Hour race, again in the Maserati. The event was also a happy one for her, because that was where she met her future husband, Argentine Alejandro de Tomaso. They ran together at Sebring in Alejandro’s Maserati, but went out after only 15 laps due to a faulty gearshift linkage. Although Isabelle did not drive at the Nürburgring 1000km herself, she entered a pair of Maserati 150S’s for Alejandro and Carlos Lostalo, and Guiseppe Musso and Walter Monaco. Alejandro and Carlos also drove their car in the Supercortemaggiore Grand Prix. Driving alone, Isabelle entered the Venezuela Grand Prix in her Maserati, but did not finish.

Sadly, 1956 was not all happiness for Isabelle. On an early foray into Europe to compete in the Rheims 12 Hours, her team-mate Annie Bousquet crashed the Porsche 550 they were sharing, and died shortly afterwards.

In 1957 she put her sadness behind her, and entered a new phase of her racing career. She and Alejandro married and became team-mates, following a game of will-they-won't-they with an interested US press. They proved a formidable pairing at Alejandro's home event in Buenos Aires, coming sixth in their small 750cc Osca, a class win. Unfortunately that was their only notable finish of the year; they failed to finish at Sebring and in Venezuela, and a crash put them out of the Swedish Grand Prix. They were on the entry list for the Mille Miglia, but it is not clear whether they actually competed. Driving solo, Isabelle finished third in the 1500cc class at the RACB Grand Prix at Spa, using an Osca S1500. Alejandro had previously raced the car, with her as entrant, in Portugal. Isabelle also shared an Alfa Romeo Giulietta SV with Carlos Menditeguy at the Nürburgring 1000 Km, but they did not finish.

The following year their fortunes were reversed. Although the couple failed to finish in Buenos Aires, Isabelle finally cracked Sebring, ably assisted by Alejandro and Robert Ferguson. They finished the 12 Hour race eighth overall, with a class win, in a works-entered Osca S750. This was in contrast to a disastrous Buenos Aires event two months previously, when the axle on the S1500 broke only five laps in.

The smaller Osca brought them another class win at Rouen in June. Isabelle and Alejandro were ninth overall in the three-hour sportscar race.

1959 was to be her last year of major competition. Isabelle and Alejandro returned to Sebring, with Denise McCluggage and Ricardo Rodriguez this time, and were eighteenth overall, in the 750cc Osca. Denise and Isabelle entered the Nürburgring 1000 Km in the 1500cc version, but the gearbox failed on the first lap. Isabelle also applied to enter Le Mans with her husband, but her entry was refused. The French authorities were still mindful of Annie Bousquet's fate three years earlier, and were keen to avoid adverse publicity. However, not all European motorsport authorities were so defensive, and Isabelle drove an Osca at the Grand Prix des Frontières at Chimay, although she does not appear to have finished. At the Spa Grand Prix, she was second to Carel Godin de Beaufort, driving the Osca S1500.

In 1959, Alejandro and Isabelle retired to Italy and founded the De Tomaso motor company, which produced both single-seater racing cars and exotic sports models for the road. Isabelle was involved with the design and was responsible for the idea and name behind De Tomaso's two performance saloons of the 1970s, the Longchamp and the Deauville. Both are named after French racecourses; by this time she was the owner of a string of racehorses.

Later in life, Isabelle's interests leaned back towards the four-legged variety than the four-wheeled. She and her sister, Hope Haskell Jones, established a successful breeding line of racehorses. As well as horses, she continues to breed prizewinning Cocker Spaniels to this day.