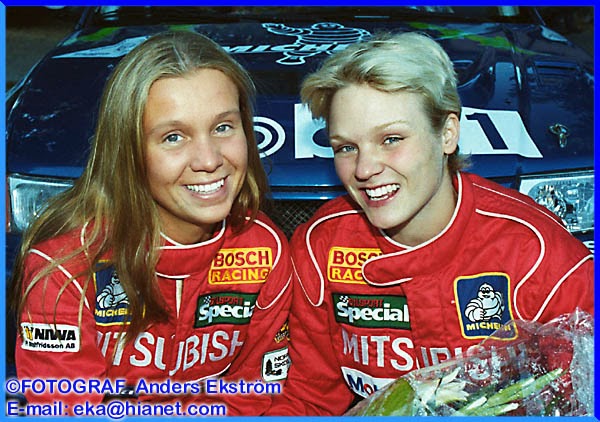 Sweden's Pernilla Walfridsson was born, like many drivers, into a rallying family. Her uncle is the well-known driver and team manager Stig-Olov, and other Walfridssons are involved in the sport in various capacities. Her father, Per-Inge, is a multiple rallycross champion, and it was through him that Pernilla got her first experiences in a rally car. He competed in classic events, and she acted as his navigator.
For most of her teenage years, Pernilla was more interested in horses, although she did enjoy rallying. She rode competitively, in show-jumping, spending time in the UK as well as Sweden.

Navigating for her father brought out her interest in motorsport, and she started driving at the age of eighteen, in 1991. Like so many Scandinavian drivers, she competed in the Volvo Original Cup in her formative years, and then spent a while in her national championships. Her car seems to have been a Volvo 240. Results from this period have, so far, largely not been forthcoming. She is recorded as a starter in the 1996 Berslgsrallyt, a club event, in a Volvo 242. Her navigator was Ann Greth Eriksson.

In 1997 she started taking part in bigger rallies, using a Mitsubishi Lancer provided by her uncle’s team.  Her first major result was twelfth in the Rally Finnskog Norway. She was also 21st in the South Swedish Rally, and 50th in the Ypres-Westhoek rally in Belgium. She and her sister Linda Walfridsson were tenth in class N4 in their Mitsubishi Lancer Evo 3.

In the same car, Pernilla and Linda also tackled their first World Rallies. The snow-bound Swedish Rally resulted in retirement, but the season-ending Network Q RAC Rally in the UK gave them a 21st place overall, sixth in Group N. Pernilla scored her first FIA points in the Production Cup, and was listed as 52nd in the standings that year.

1998 saw a few changes. The ageing Evo 3 was replaced by the newer Evo 4, and Pernilla found a new navigator, Ulrika Mattson. Their international calendar contained visits to Finland and the UK, as well as their home WRC event, and the positions were good. They were 28th in Sweden and 21st again in Finland and the RAC Rally. Even better, they were eighth, third and fourth in Group N respectively. Their only real disappointment was a non-finish on the German AVD/STH Hunsrück-Rallye, but eleventh in the FIA Production Cup, amongst drivers who had entered more events than them, was a good consolation.

In European events, their season was mixed. Pernilla was eighth in the Rally Finnskog and second in Group N, but retired from the South Swedish Rally. Later in the season, she was 21st in the Golden Tulip event, in the Netherlands.

Pernilla was now a popular figure in world rallying, in Scandinavia and the UK especially, after she had also driven in some British rallies. These included the Manx Trophy Rally, in which she was second. She was tipped as a possible future star and had a growing number of fans. With support from her family team behind her, she embarked on her most ambitious rally programme yet in 1999. Sadly, it was not a success. She failed to finish in any of her WRC rounds: Sweden, Portugal, Catalunya, Finland and Britain. Even a switch to a more powerful Lancer Evo 5 after Sweden could not help her.

Her only consolation was a string of excellent performances in the Norwegian championship. She did not finish the Rally Finnskog, but was seventh in the Solor Rally, ninth at Numedals and sixth at Trondelag. With Ulrika, she was third in Group N in the Norwegian championship. Away from Norway, a switch to an Evo 5 brought her better fortunes: she was fourth in the South Swedish Rally, and won Group N.

Not to be deterred, Pernilla returned the following year, with a mixed programme on WRC, Swedish and Norwegian events. She had upgraded the car to the all-conquering Evo 6. with which Tommi Makinen had dominated the WRC. (Throughout her career, she was very loyal to Mitsubishi.)

During that year's snow season, Pernilla and Ulrika were 24th in Sweden, seventh in Group N, and retired from the Rally Finnskog. A move to sunnier climes in Catalunya resulted in another retirement, but things picked up after that. Twenty-one seemed to be Pernilla's lucky number as she was 21st again in Finland and sixth in Group N. Slightly closer to home, they were a strong eighth in the Renault South Swedish Rally, fourth in class.

The Norwegian championship was where she really shone again, this year. Apart from retirements in the Rally Finnskog and the Solor Rally, she was never out of the top ten. Her best finish was third, achieved at Larvik and Trondelag. She was also fourth at Flesberg, and fifth at Hedemarken. This was enough to win her the Group N title.

Near the end of the season, Ulrika and Pernilla parted company after facing two years of ups, downs, offs and modest successes together. For the RAC Rally, Charlotta Thorszelius-Babbington was drafted in to read the notes. The pair did quite well on their first big event together, coming 35th and ninth in Group N. Pernilla’s final position in the Production (Group N) WRC was 37th.

It turned out that 2000 was Pernilla's last year of active competition. She had struck up a relationship with works Subaru ace Petter Solberg and gave birth to their son Oliver in 2001. The couple married after Petter became World Rally champion in 2003. Pernilla was still a face on the WRC scene, but in a supporting role. More recently, she and Petter have begun competing in historic rallies together, with Pernilla as co-driver, in a Ford Escort MkII.