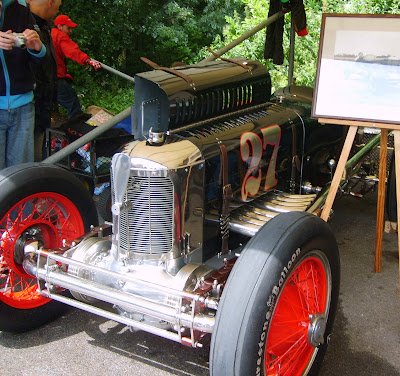 Not many women have broken records on two, three and four wheels. Gwenda Stewart, also known as Hawkes and Janson, began by racing a motorcycle, then a Morgan three-wheeler, then a series of cars. She attempted her first motorcycle speed record in 1921 at Brooklands. Between 1921 and 1930, she set a whole series of motorcycle speed records, for endurance and top speed, at Brooklands and Montlhéry. Among her chosen machines were those by Ner-A-Car, Trump and Terrot, the latter two being JAP-engined.

By 1931 she was one of the fastest people on three wheels in her record-breaking Morgan Aero. She set and held records for the standing and flying kilometre at Montlhéry in France which were not bettered for years, including the fastest speed ever recorded in a Morgan. The previous year, she had earned the one hour speed average speed record, in the same car.

Later, she set a new set of records in an American Miller, of the type that competed at Indianapolis. She also used this car at the Arpajon Speed Trials, where she had a dramatic engine blowout at 140 mph. The Miller was later developed with Derby parts, and became known as the Derby-Miller.

Although Gwenda had been known to say that she preferred record-breaking to racing as it required less effort, she was nevertheless a quick and skilful racer. She raced at Montlhéry and Brooklands, and twice at the Le Mans 24 Hour race, in 1934 and 1935. She drove a Derby on both occasions. She was partnered by "Bonne" and Charlesworth respectively, but retired fairly early both times. 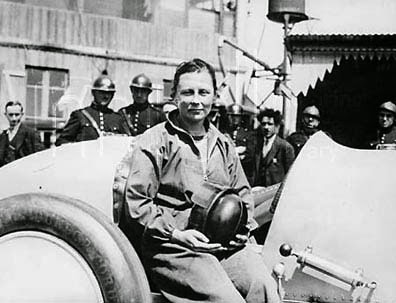 In 1935, she shared the Derby-Miller with Pat Driscoll for the Brooklands 500 Mile race, but they did not finish. Gwenda is listed as the entrant for George Duller and Elsie Wisdom in a Derby-Maserati, but they did not start. She often used Derby machinery and her third husband, Douglas Hawkes, had a large stake in the company.

In contrast to her motorcycling and Morgan past, Gwenda seemed to prefer big, heavy cars, like the Derby-Miller. She also drove a 1933 Duesenberg in which she came seventh in the 500 Mile race at Brooklands in 1936. This was probably her best race result. She was driving with George (Jack?) Duller, whom she is known to have shared cars with in minor Brooklands events. They were third in the 5000cc class.

She even tried her hand at rallying, like most other racers of her era. In 1934, she entered the Monte Carlo Rally in a Derby, starting at Valencia. However, for a true speed demon like Gwenda, it is likely to have been too pedestrian. She does not appear to have taken part in any more major rallies.

She was somewhat overshadowed by other lady racers of the time but proved she could be the quickest on an open track, if not during a race. A great rivalry was set up between her and Kay Petre, which culminated in a competition for the Women's Outer Circuit Record at Brooklands. The contest was drawn out over the 1934 and 1935 seasons. Kay initially took the record but Gwenda was the final victor at 135.95 mph. She was driving the Derby-Miller.

A little later, again in the Derby-Miller, she returned to her favourite stamping ground, Montlhéry, and claimed the outright lap record. Her racing career concluded at the end of the 1930s, like so many others of the period. When war broke out she trained as a lathe operator and served in munitions factories. After the war she settled with her husband in the Greek islands and lived there until her death in 1990, at the age of ninety-six.