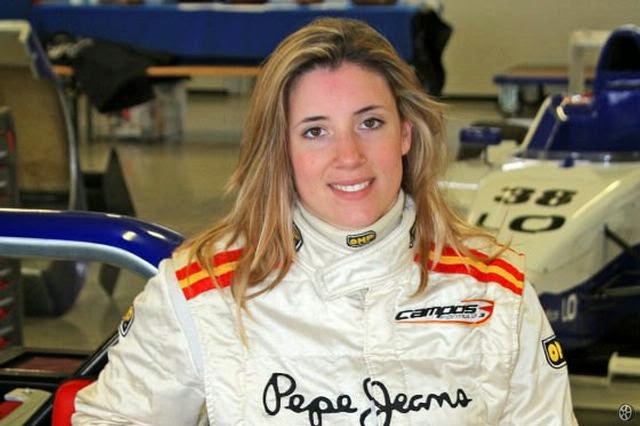 Natacha is a former karter from Switzerland, who is now racing single seaters in Europe. She is managed by Willi Weber, who was also the manager to Niki Lauda and Michael Schumacher. Other members of her family are involved in motorsports: her father runs his own kart manufacturing company, and the Formula One driver Sebastian Buemi is her cousin.

Her first steps in car racing came in 2002, when she first qualified for the Formula ADAC BMW series in Germany. Her first season of competition was 2003. This year, she had a mixed season. She was only 19th in the championship, but achieved a more impressive best finish of fourth.

She stayed in the series until 2005, without major success in the first two years. She repeated her fourth place twice at the Nürburgring, but did not mount a consistent challenge to the front-runners. However, she was sixth in the final standings in 2005 after a much better season. Her best finishes were two second places at the Nürburgring and the Norisring, and she scored an additional podium place at Lausitz.

2006 saw her drive in three different F3 championships, with varying results. She was part of the Austrian, German and Euroseries championships. She did best in Austria, winning one race and finishing on the podium twice. At the end of the season, she was fourth. In Germany, she raced in both the Trophy and Cup class and achieved podium finishes in each, although she was out of the overall top ten. Her seven races in the Euroseries, a far more competitive championship, were not as successful. Her best finish by a long way was tenth, at the final race of the season at Hockenheim. It was now being noted that Sebastien Buemi, who is younger than Natacha, was overtaking her in his motorsport career.

2007 was spent on a limited Star Mazda programme in the USA, with a view to developing her career further there. She finished in the top ten in all seven of her races, with a pair of podium positions (third and second) at Cleveland and Portland, but she did not complete enough of the season to mount a serious challenge. Whilst in the States, she was all set to enter her first Champ Car Atlantic race, but it did not happen.

She returned to Europe for Spanish F3 in 2008. This season proved to be the kick-start that her career needed. She was third overall, and won the Cup of Spain after winning five times. Her wins came at Jarama, Jerez and Valencia, including one at Valencia’s street circuit. Valencia proved to be a favourite location, as she was second and third in the main F3 street races there too, as well as coming second in Jarama. These were her best finishes of that particular series, although she mounted the podium at Spa as well.

In 2009, she spread her wings into sportscar racing, as well as pushing forward with her single-seater career. She entered Formula Le Mans as part of the Hope Pole Vision team, as well as the revived Formula Two. In addition, her Formula Le Mans team put her into selected Radical European Master Series races, driving a Radical SR5.

Formula Two has given her mixed blessings. Her best finish has been eleventh, which she managed at Valencia, Spa and Oschersleben. She has also recorded non-finishes at Valencia, Brno and Donington, and finished towards the back of the pack elsewhere.

Sportscars seem to suit her somewhat better. Driving with Christophe Pillon, her best finish in Formula Le Mans is third, at Le Mans itself and the Nürburgring, and she has scored further top tens at Algarve and the Nürburgring, in the form of a seventh and eighth, and a fifth. Problems with vibrations put her down to eighth and sixth at Silverstone, but this was found to be due to a damaged differential.

After 2009, Natacha moved full-time into sportscar competition. She joined up with the Matech team to race their Ford GT, including a run at Le Mans. The campaign would take in the Le Mans Series and the FIA GT1 Championship. Her team-mate was Cyndie Allemann. Unfortunately, Natacha had a serious accident in the first race at Abu Dhabi, broke her leg and was unable to continue for most of the season. Her place was taken by Rahel Frey, until July. She returned for the Paul Ricard race, and partnered Olivier Panis. They were 18th and 21st. After that, Natacha did not appear.

Her Le Mans Series season was wiped out completely, although she did recover in time for the 24 Hours itself. Matech, a Swiss team, assembled an all-Swiss, all-female driving squad, consisting of Natacha, Cyndie and Rahel. Unfortunately, a fire early on caused a series of problems with the car, and they did not finish.

Away from Matech, Natacha also entered the Auto GP sportscar series, driving for the Charouz team. She was eleventh and twelfth at Spa, seventh and eighth at Navarra and tenth and fifteenth at Monza. Her car was a Zytek-engined Lola B05/52.

In 2011, she struggled to find funding or a race seat, and appears to have made one appearance in the modern car section of the French Formula V de V series, driving a Norma M20F. The situation was similar in 2012: as far as can be made out, she competed in one race, the Nürburgring 24 Hours. She drove for the Toyota Swiss team in a GT86, with Oliver Burri, Christoph Wuest and Andreas Lanz. They were 78th, but still won class V3.

Natacha's long-term plans at this point were unclear. In a familiar scenario, she appeared to be struggling for sponsorship. However, she made a comeback in 2013, back in sportscars again; the European Le Mans Series this time. She was driving a Judd-engined Morgan LMP2 car for the Morand team. Her first race for the team, the Silverstone 3 Hours, ended in a DNF. Her team-mate was Franck Mailleux. However, at the next round,  Imola, they were third, a result they repeated at the Red Bull Ring. Natacha drove with former F1 pilot, Christian Klien, at the Hungaroring, and was fifth. The same pairing was second at Paul Ricard, Natacha's best finish.

The team also entered Le Mans itself. Natacha, Franck and Olivier Lombard started eleventh, and also finished in that position.

She does not appear to have raced in 2014. In 2015, she did some rounds of the VdeV championship's Enduro Proto Challenge, driving a Norma. She did well, with a second at Mugello and a third at Paul Ricard. She was eleventh in the championship.