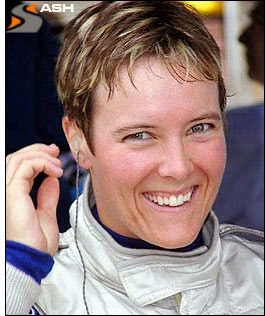 Between 2002 and 2004, Canadian Melanie was the leading female entrant in the American Le Mans Series. Despite such high-level experience, she had only been racing since 1995, and had only raced sports prototypes since 2002.

Before she took up motorsport, Melanie skied competitively, like Briton Divina Galica. She was the Canadian national champion three times.

1995 was the year that Melanie made her track debut. She took extensive training in a Formula Ford 2000 car, and worked as a mechanic in order to pay for her racing. This also helped her to learn about the car. In her two seasons in club FF2000 she managed to win one race and claim three top-five finishes.

From single-seaters, she changed to Legends racing in 1997. On her fifth start of the championship she won her first Legends race, and finished the season in ninth position.

Between 1998 and 2000, Melanie took part in Canadian Formula Ford races. She did not always have the funding for a full season and her results were mixed. In 2001 she does not appear to have raced at all. However, she made a dramatic comeback in 2002, moving up to the ALMS sportscar championship.

For most of the season, she drove a Lola-Nissan for Essex Racing, partnered by either Ross Bentley or Marc-Antoine Camarand. This car had the reputation for being very fast, but not the most durable. Melanie finished twice, coming sixteenth both times. At Mosport she was second in the LMP675 class and at Trois-Rivieres she was third. For the season finale, the ten-hour Petit Le Mans at Road Atlanta, she got a ride in a Bucknum Racing Pilbeam, another LMP675 machine. She was 29th overall, third in class, alongside Pierre Ehret and John Olsen.

She returned to the ALMS with a different team the following year, having come eleventh in the LMP675 driver standings of 2002. Her car of choice was a Lola-Millington run by Cooke Racing, which she shared with Ben Devlin and Jason Workman. They suffered a poor beginning to their season at Sebring, when engine trouble prevented them from even starting, but things went better at the first visit of the season to Road Atlanta. They were 23rd, fifth in class. Back at Melanie's favourite track, Trois-Rivieres, they were second LMP675 finishers, 18th overall. The trio did one more race together at Mosport and were 26th, fourth in class.

As happened the previous year, Melanie switched cars for Petit Le Mans, this time for the American Spirit Racing Riley & Scott. She, Tony Drissi and Michael Lewis were tenth in the standings and fifth in class, a career best for Melanie. She finished the year thirteenth in the LMP675 driver points, 29th overall.

Funding was a big issue during the 2004 season, and Melanie only raced twice. She drove the first GT-class race of her career in the Lime Rock ALMS round, coming 20th and tenth in class in a J3 Porsche. Her co-driver was Randy Wars this time. Her next outing was Petit Le Mans and it was set to be a good one; she had secured a seat in the Autocon Racing Riley & Scott, hoping to better her 2003 result. It was also to be her first drive in an LMP900 car, the fastest sportscar class. Unfortunately, she did not get to drive, because one of her team-mates crashed out early on. Away from the international stage, she did some club endurance racing in a BMW at Portland, finishing eighth in the P2 class in the Cascade Sports Car Club’s official enduro. Her co-drivers were John Ladd and Danny Kok.

Since then, Melanie does not appear to have raced and her website has not been updated. She seems to have been working as a driving instructor.

(Image from www.dailysportscar.com)
Posted by Rachel H-G at 13:49