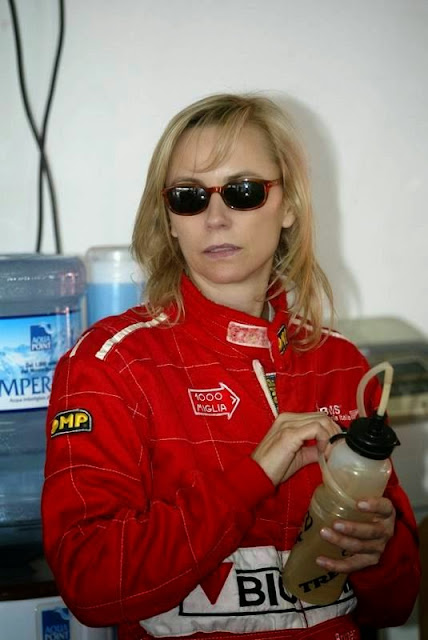 Looking at Lilian Bryner's past, it is clear to see she has a taste for adventure. She progressed from Olympic showjumper in 1980, to one of the world's leading GT racers in 2006, via international photojournalism, then a spell as a commercial pilot and professional flight instructor. Having done that much already, she was still only thirty-two when she turned to motorsport in 1991, racing in the Porsche Cup. As there are no race tracks in her native Switzerland, she drove in neighbouring Germany, in a Carrera, for two years.

After some good results, it was time to step up in 1993, when Lilian contested the Grand Prix-supporting Porsche Supercup series. That year also saw her first Le Mans appearance, also in a Carrera 2 Cup, which ended in retirement. Her co-drivers were Enzo Calderari and Luigino Pagotto. The same trio were ninth in the Spa 24 Hours in a Carrera RS 3.6. Lilian and Enzo entered the Vallelunga three-hour race but did not finish.

The following year she scored her best-ever result at the classic Sarthe event, in a similar Porsche. She came ninth overall and second in the GT2 class. The car was a Carrera RSR, and she was assisted by Enzo Calderari and Renato Mastropietro. Lilian and Enzo returned to Vallelunga for the Gold Cup, and were third overall in the same car.

The Calderari/Bryner pairing also took part in some rounds of the BPR sportscar championship that year, driving a series of Porsche 911 models. They were fifth at Paul Ricard, third at Jarama, seventh at Spa and eighth at Zhuhai.

Her fortunate streak continued in 1995. That year she won the Porsche Supercup outright, and was GT2 champion in the BPR GT series, with seven class wins. The car was a 911 GT2. Her best overall finish was third, at Jerez. She was also sixth at Monza, seventh at Jarama, sixth at the Nurburgring and Donington, fifth at Anderstorp, eighth at Suzuka, eleventh at Silverstone, seventh at Nogaro and fourth at Zhuhai. Her team-mate in the BPR was again, Enzo Calderari. The pair have been driving together ever since. The Bryner/Calderari combination was also a hit at the Daytona 24 Hours, coming fifth and winning the GTS-2 class with Ulli Richter and Renato Mastropietro. Le Mans ended in another retirement, after a crash. Their cars were a Carrera RSR and GT2 respectively.

They had no more luck at Le Mans in 1996, when an accident in their Porsche 911 GT2 during qualifying meant that they couldn't start. Still, another GTS-2 class win at Daytona, plus a fourth overall, was something of a consolation. Their car was an RSR this time. They managed to finish rounds of the last BPR championship before it became the FIA GT series, but their GT2 was not as competitive as it once was. They were eight at Paul Ricard, fourteenth at Silverstone, twelfth at the Nürburgring, eleventh at Anderstorp, twelfth again at Suzuka, tenth at Brands Hatch, thirteenth at Spa and eleventh at Nogaro and Zhuhai.

In 1997 things were not so good. There was only enough money to compete in four FIA GT rounds in the Porsche, and Le Mans was a disaster yet again. Lilian retired the car early on with engine trouble, on her last attempt at the 24 Hours. In FIA GTs, she and Enzo were 21st at the Nürburgring and 20th at Sebring. They did not finish at Hockenheim or Laguna Seca. Ulli Richter was the third driver in their team.

The team also crossed the Atlantic for some IMSA rounds that year. They were 22nd in the Daytona 24 Hours, with Ellen Lohr, and fourteenth, third in class, at the Sebring 12 Hours. In a short late-season race at Sebring, Lilian was eighth, driving a 911 with Enzo and Andy Pilgrim this time.

In 1998 it was time for a change. Having raced Porsche GTs for many seasons now, Lilian and Enzo switched to a Ferrari 333SP prototype, run by the BMS Scuderia Italia team. The change did them good; they won the Italian Enduro Challenge outright. An excellent second in the Barcelona and Spa rounds gave the pair, and team-mate Angelo Zadra, eighth overall in the championship. They were also seventh at Brno, fifth at Magny-Cours, eighth at Mondello Park. This made up for Lilian's last lap coming-together with a backmarker whilst leading the Vallelunga 6 Hours. It was during her time in the SRWC that she built up a reputation as a tough, uncompromising driver, although she was much more careful after the Vallelunga embarrassment.

The team stayed together for 1999. Another third at Monza, and fifth spots at Barcelona, Brno and Enna-Pergusa gave them seventh place in the SRWC. They were also sixth at Spa, and eighth at Donington and the Nürburgring. A trip across the water to Daytona earned them a fourth place, Lilian's best finish there so far. The team were joined by Carl Rosenblad.

By 2000, Lilian, Enzo and Angelo were an experienced team. The Ferrari was ultra-reliable and they finished every race except one in the SRWC. They finished second in the final results, after a second place and class win at Spa, another third at Donington and fifth places at Barcelona, Monza and Magny Cours. They were sixth at Brno, seventh at the Nürburgring and did not finish at Kyalami.

The SRWC became the FIA Sportscar Championship the following season, and BMS Scuderia still entered. However, the team only managed tenth in the championship, with a best finish of second at Barcelona and Spa. They were seventh at Brno, fifth at Magny-Cours, eighth at Mondello, and did not finish at Monza, Donington and the Nürburgring. The other teams had brought out new cars, and last year's rock-solid Ferrari 333SP was now looking unreliable and long in the tooth. Angelo Zadra joined the car in retirement at the end of the year.

Lilian and Enzo stayed with BMS Scuderia Italia the following season. Team owner, erstwhile rally privateer Frédéric Dor, had purchased two Ferrari 550 Maranellos for FIA GTs, and intended to drive one himself alongside the Swiss pairing. Andrea Piccini and Jean-Denis Deletraz dove the other car. For Lilian, it was a year best put down as a "learning year". Her year started inauspiciously at Magny-Cours, when she did not drive, after a spin from Enzo Calderari. They were eleventh at Silverstone, and the engine failed at Brno. Another DNF followed at Jarama. They managed a fifth at Anderstorp as a duo, but failed to even make the start at Oschersleben. The partnership with Dor was not working and it showed. He replaced himself with Marco Zadra for the Spa 24 Hours, but the car’s electrics failed. Jean-Marc Gounon, Lilian and Enzo managed a 19th place at Pergusa, and then they finally broke into the top three at Donington, with second place. They were fifth at Estoril. Lilian only managed nineteenth overall in the final driver standings.

The pair stayed with BMS for 2003, but as members of the satellite Care Racing team. With more experience of the car, and an agreeable team-mate in Stefano Livio, they were impressive. One win and a string of top-five finishes left them fifth overall. Mercifully, they were back on the pace for the first race, coming third at Barcelona. A gear linkage broke at Magny-Cours, but they were third again at Pergusa. A fifth at Brno and a second at Donington followed. They won the GT class in the Spa 24 Hours, which was won by a smaller GT2 car for the first time ever, driving quickly but steadily in the pouring rain. This was followed up by fifth at Anderstorp, third at Oschersleben and 22nd at Estoril after the driveshaft went. The year was rounded off by a runner-up spot at Monza. The 550 proved reliable and the sister cars of Gollin/Capellari and Biagi/Bobbi won consistently.

However, the car's success in 2003 did not help much in 2004. That year, all three machines had to run with restricted air intakes, to allow the competition to catch up, which meant that Lilian was having to drive harder than ever to achieve the results she was capable of. This did not stop her and her team-mates from taking a historic outright win at the Spa 24 Hours in July 2004, a first win in a 24-hour race for a woman, and Care Racing's first of the season. The trio were also fifth at Monza and Imola, seventh at Donington and Brno, sixth at Oschersleben, fourth at Zhuhai in China and third at Hockenheim and Dubai. Stefano Livio did not race at Dubai or Zhuhai, and was replaced my Max Biagi and Christophe Bouchut, respectively.

Uncharacteristically, Lilian and Enzo, her partner as well as her colleague, changed teams at the end of the 2005 season. BMS Scuderia Italia and Care Racing had pulled out of FIA GTs, so they teamed up with Larbre Competition, who were more famous for running Chrysler Vipers than that season's Ferrari 550 Maranello. The second Larbre car, driven by Lilian, Enzo and fellow Swiss Steve Zacchia, only appeared for the first two rounds, at Monza and Magny-Cours, coming sixth both times. It returned for the Proximus Spa 24 Hours, where Lilian and her team-mates were fourth, but that was its only other outing. The Ferrari was still capable of success, but the Aston Martin DB9s and Maserati MC12s were catching up and winning.

The Swiss pair joined up with BMS Scuderia Italia again during the off-season. The Italian team was entering the new European GT3 Championship, running an Aston Martin DB9 in the Aston Martin Cup. At the opening round, at Silverstone, they could only manage a brace of 24th places and were seriously off the pace. Not long afterwards, it was announced that the duo had left the team, citing "personal difficulties". It is not known what these circumstances are, or whether Lilian would return to BMS (or motorsport) at all. She has not competed since.