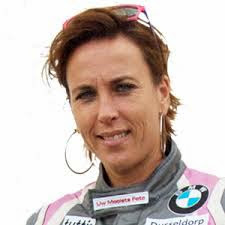 Like many other Speedqueens, the Netherlands' Sandra van der Sloot was introduced to motor racing by her father, who rallied a Peugeot 205 in national events. She was an adventurous child who preferred the rough and tumble of outdoor play to dolls, and she enjoyed attending races and rallies with her father and Frank Caron, a family friend and racer. It was her ambition to compete herself from a young age, and her own racing career began when she was seventeen, in 1992.

The Citroen AX Cup was a popular starting point for young European drivers, and Sandra did not disgrace herself in her first season. She was winning races almost straight away, and came seventh in the Cup overall, runner-up in the Ladies' class. She continued in the GTI class in 1993, and although she did not lift the Ladies' Trophy, she improved on her overall position with a fifth spot.

Sandra took a break from driving a Citroen to race a Rover and a Fiat the following year, with similar promising results. With the Rover she won the 1400cc class of a Dutch saloon championship, and she was the fastest junior driver in the Fiat Cinquecento Rally Trofeo Cup too, as well as the runner-up overall. She won the Cinquecento junior crown again in 1995 and was third overall, with one win. 1995 was the year she really made her mark on the Citroen AX GTI Cup too, winning three times to claim second on the leaderboard, and the Ladies' Trophy for the first time.

Bigger competition was now on the horizon. Mitsubishi entered the Dutch Touring Car Championship in 1996 with the Carisma, and Sandra was chosen for the works squad. The aim was to raise the profile of the car in the Low Countries, but it was not quite up to the job and Sandra struggled with it. She did not record many good placings and returned to other championships the following year.

For a change, Sandra sampled her first endurance race in 1997, winning her class in the Zandvoort 500km. This was part of the Dutch Supercar Challenge for touring cars and was held in October. Her other notable result of the year was a second place in a European Citroen Saxo Ladies' Race, out of 36 starters who had all done well in their national championships.

The lure of another season in the DTCC was strong, and Sandra returned to the Mitsubishi Carisma team, partnered by Allard Kalff. Neither did particularly well and the car was outclassed again, by BMWs and Renaults.

1999 was a much better year. The Citroen AX had been superseded by the Saxo, but the Saxo Cup was in the same spirit as the AX Cup. Sandra's return to Citroen was triumphant; she won her first outright championship this year, after a string of fine wins. She also won the Ladies' European Final for the Saxo series, against similar opposition to before. In addition to her one-make glories, she finally secured a decent drive in the DTCC, in a more competitive BMW this time. She was twelfth overall, and the third-best privateer driver.

Although she continued to race Saxos in Italy, Sandra moved on to a different marque in 2000. Her first season as an Alfa Romeo driver netted her the runner-up spot in the Alfa 156 Challenge. Proving that she was not just a Citroen specialist, she walked off with the 156 Championship the following year, after a dominant performance. It was her second outright title.

Having hooked up with the Cable1 squad in 2001, she moved on to the Alfa 147 Championship in 2002. Although she was still challenging strongly for positions, she was not quite as quick in 147s and could only come sixth. Endurance racing had not been forgotten either; Sandra took part in a 24-hour touring car race in Barcelona and sampled the SEAT Endurance Cup, a series of two-driver races for SEAT Cupras.

2003 continued in the same vein; a two-pronged attack on the SEAT Endurance and Alfa 147 GTA Challenges. Sandra was still not on top form with the Bleekemolen 147, and could only finish eighth.

The Bleekemolen team, run by Dutch GT and touring car ace Jeroen, moved into the Renault Clio Cup in 2004, taking their lady star with them. The Clio Cup was one of the established European saloon series. Sandra was sixth overall after some good performances, but she was still looking for wins.

2005 saw the Dutchwoman return to winning ways. One of the highlights of her season must have been winning the SEAT Cupra enduro at the high-profile Marlboro Masters meeting at Zandvoort, her home circuit. Her co-driver was 18-year-old Sheila Verschuur, and the duo were sponsored by the Army for their attempt at the SEAT Cupra Cup. The Cup consisted of sprint races, contested by single drivers, and a much longer two-driver endurance race. Both women drove well, and Sandra was second overall in the championship.

When she was not competing with Sheila in the SEAT, Sandra was travelling to Germany for the Toyota Yaris Cup. She claimed the Ladies' Trophy from a field of seven women, and came third overall, after winning the Assen round and scoring well at the other meetings.

In 2006, Sandra was triumphant once more. She claimed the SEAT Cupra Cup Netherlands crown for the first time, partnered by Sheila Verschuur. They were once more sponsored by the Dutch Army. As well as home-based competition, Sandra was also running a parallel campaign in the Spanish GT Open Championship. Her co-driver was Jose Luis Bermudez de Castro and they were driving his works-supported Marcos Mantis. They won their class outright.

2007 began in a similar fashion. Sandra and Sheila continued to drive together for Verschuur Motorsport in the SEAT Cupra Cup, supported by the Army. Although Sandra could not hang on to her championship, she still won four times, and mounted the podium nine times. She was second overall.

In the off-season, she did two races of the Dutch Winter Endurance Championship in the Cupra, and managed one podium.

It was time for a change in 2008. Sandra, still sponsored by the Army, returned to Renault Clios and enrolled in the Dunlop Sportmaxx Clio Cup. She was competitive, and scored two wins, six podiums and two fastest laps over the course of a season. However, she was not quite competitive enough for the overall championship, and had to settle for third.

After a single race in the Winter Endurance Series, Sandra continued with her Clio mission for the Army. This time, she won four times and walked away with the championship.

Her last season with the Army team gave her a second position in the Clio Cup, after she was narrowly beaten by Addi van de Ven, despite not posting any wins. Team-mate Sheila Verschuur was not far behind.

In 2011, she had a new car, a Clio RS 197 run by the Day V Tech team. This time, she was not among the frontrunners, with only one podium finish and a fastest lap to her name. The podium was a third place at Assen.

For 2012, Sandra joined forces with some old friends and rivals in the Dutch Racingdivas team: Sheila Verschuur, Paulien Zwart, Liesette Braams and Gaby Uljee. Their car was a Clio. Their first major race together was the Dubai 24 Hours, in which they finished 39th, fourth in class. The team was Sandra's own idea.

For the rest of the year, the Racingdivas undertook fundraising and media work together, but did not have enough budget for a full racing season. Sandra entered two rounds of the Dutch Clio Cup, and scored enough points for 19th overall.

The story for the Divas was similar in 2013. They only had one competitive outing together, the Dubai 24 Hours, driving a Schubert BMW 320D with Liesette Braams, Paulien Zwart, Gaby Uljee and Sheila Verschuur. They were 26th overall, with a class win. They also took part in the Rotterdam Street Races, but that event is more of a demonstration run.

Sandra remained involved with the Racing Divas in 2014. The team was working on sponsorship, but they still struggled. Again, they took part in the Dubai 24 Hours, in a Schubert BMW, and won their class again. They were 31st overall.

In 2015, they entered the Dubai 24 Hours again, in a BMW 325. For the first time, the driving squad included a male driver, Max Partl. Gaby Uljee and Liesette Braams made up the four-driver team with Sandra. They were 23rd overall, and won their class. Away from Diva duty, Sandra, driving a BMW 132 with Robert van den Berg, did some races in the Dutch Supercar Challenge. Her best finish was seventh, at Spa, in the Supersport class. She was 16th in the championship.

It was back to an old faithful in 2017: the Alfa Romeo 147. Sandra won three rounds of the Sport class of the Supercar Challenge in this car, at A1-Ring, Zolder and the Nurburgring. She was third in the championship with John van der Voort.

A new challenge awaited in 2018. Sandra entered the Benelux Porsche GT3 Cup Challenge in a 991. She was a leader in her class and her best overall result was sixth, achieved at Spa and Zolder. Later in the season, she travelled to China for a guest appearance in the Asian Porsche Carrera Cup at Shanghai, finishing fourth and eighth.

Her second season in the Benelux Porsche Carrera Cup resulted in a series of class wins and podiums. Her best overall finishes were two sixth places at Spa and Zolder and she was twelfth overall in the championship. She also made a guest appearance in the Dutch Supercar Challenge, driving a BMW M4 Silhouette for JR Motorsport.

(Image from www.racingdivas.nl)
Posted by Rachel H-G at 14:51