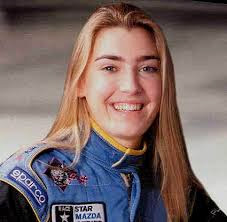 Daughter of a racer, Sara Senske started young. She began karting at seven, won her first race at eight and her first championship at nine. During her seven years in karts, she won the prestigious IKF Gold Cup three times, and won or scored well in several other state and club championships.

After her illustrious karting career, she was signed by the Lyn St James Driver Development Program, where she honed her racecraft and media nous further in 1994 and 1995. At the age of eighteen, in 1996, she enrolled at the famous Skip Barber racing school, in order to move up to cars. In that year's Skip Barber Western racing series, she won one race and collected five podium finishes. She ended the year as the school's Most Improved Driver.

The following season she stepped up to the popular Star Formula Mazda single-seater series for the last six races. Having learnt the car, she came back the next year for a full season and ended it eighth. Eighth was her final position in 1999 too, after a string of top-ten placings, some podium finishes and two fastest laps, at Irwindale and Pike's Peak. That year she also tried sportscar racing in the Women's Global GT Series. She won once, from pole, at Portland, and came fourth in the championship.

For 2000, Sara decided she had learnt enough from Formula Mazda. Showing her typical self-discipline and determination which she attributes to her Christian faith, she put together funds for a ride in the Barber Dodge Pro Series with Lynx Racing. She had been running with the team for a while and it was a logical step. Her first year was not spectacular, with one top-ten place to her name, but she was a steady and reliable finisher. The following year, her confidence and experience grew and she was rewarded with more top ten positions. starting with a sixth at Lime Rock. Her biggest achievement was at Chicago, where she was second behind Nicolas Rondet, having kept by him for the whole race. That was the first time a woman had mounted the podium in the Pro Series, and Sara joked later about the lack of "podium guys" laid on for her.

At first, Lynx Racing were keen to capitalise on her success with a move into the Toyota Atlantic series, the next step towards CART or the IRL. Unfortunately, for one reason or another, Sara was passed over by the team in favour of someone else. She tested for a few other teams, and tried out for the NASCAR Craftsman Truck Series in a Dodge, but nothing came of it. This must have been a big blow, especially as she gave up her university studies to focus on her racing.

Sara still had ambitions of reaching CART or the Indy Racing League, and kept her hand in by driving the official Pace Car at CART events. She also drove in the 2001 Toyota Pro/Celebrity race as a Pro.

She has now retired from motorsport, and works as a mental health counsellor.