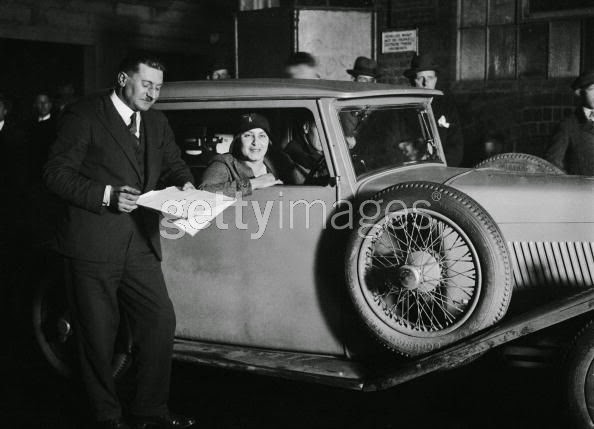 Joan at the 1930 Monte Carlo Rally, driving a Lea-Francis

Joan Chetwynd, who normally used the nom de course of "The Honourable Mrs Chetwynd", was born Joan Gilbert Casson in 1898. She was a distant cousin to Tim Birkin. Adam, the Viscount Chetwynd, was her second husband, and it was he who introduced her to motorsport, shortly after their marriage in 1928. He was a semi-regular competitor at Brooklands. The couple occasionally shared a car.

Her early outings were in circuit racing and she was both a regular on the Brooklands scene and a Le Mans competitor, although she later became an accomplished rally driver.

She is sometimes credited as " Lady Chetwynd", which indeed she was, after her father-in-law died in 1936.

The earliest records of Joan's racing career appear in 1929. She set a new twelve-hour Class F speed record at Brooklands, driving a Meadow-engined 1500cc Lea-Francis. Her average speed was 82.98 mph. In a different car, a Frazer Nash, she entered the famous Brooklands Double Twelve Hour race, but did not make the finish.

A break of a year or so followed, while Joan had her first child of three, Philippa.

In 1931 Joan managed to get herself mixed up with the embarrassing débacle that was "The Brooklands Society Ladies' Private Handicap". This was nominally a handicap race for lady drivers at the Weybridge circuit, organised by the romantic novelist Barbara Cartland, of all people. In reality, it was not a real race at all but a series of scenes and amateur driving stunts performed by the ladies for the benefit of a camera crew, who were recording the "action". Joan had been scheduled to finish second despite a heavy handicap, as she was the only experienced Brooklands racer of the group. Of course, the motoring press found out the real story very quickly and the ladies were roundly lambasted by journalists. So much so that Joan felt the need to defend herself in a letter to The Motor, which stated that she had agreed to take part in a film about motor racing on an anonymous basis. She then condemned the poor driving standards of the other "entrants" in a scathing manner. Interestingly, the woman who was filmed finishing third, Paddie Naismith, would go on to become a bona fide Brooklands driver of considerable skill a little later. The Cartland escapade was forgotten quite quickly.

In the summer, Joan had done some other racing of the most genuine kind: the Le Mans 24 Hours. She and an H.H. Sisted entered as a team in her own MG Midget C, but a faulty timing gear put them out of the French classic after only 30 laps. I do not know if Joan herself even got to drive. It was her intention to race again at La Sarthe the following year; her name is down as an entrant, the car being an MG Midget C, but she is listed as "In Entry List Only". This is probably due to the fact that the Midget was badly damaged at the Brooklands 1000 Mile race, two weeks or so before Le Mans. Joan and her husband had to retire after a con rod broke.

A highlight of 1932 for Joan must have been winning the Women's Automobile Sports Association Ladies' Handicap at the Guys Gala Meeting, Brooklands. She was back in a Lea-Francis. She also competed in the JCC 1000 Mile race at Brooklands, with Victoria Worsley, but the engine blew in their MG Midget.

After 1932, Joan appears to have concentrated on rallying. She entered that year’s RAC Rally in an MG Midget. That year, she had not abandoned Brooklands completely; she and her husband shared the Midget at the Whitsun meeting, with Joan driving in the Cobham Junior Short Handicap.

Her first major finish was probably the 1933 RAC Rally, in which she drove a Ford to an excellent fourth place. Bath had been her start point.

After another break to have the last of her children, Adam, she returned to the major stages in 1936. Still driving a Ford, she won her class in the RAC Rally. For the 1938 RAC, she was less successful in a Lanchester, but a return to Ford power the following year gave her the Closed Car Ladies' Cup. The Coupe des Dames awards were sought-after in the Thirties, as there were many more female entrants than there are now.

Motorsport activities ended for the Second World War in 1939. Joan served in the WAAF and made the officer ranks. After peace returned to Europe, she did not return to active competition.

Lord and Lady Chetwynd were divorced in 1951. Joan never remarried. She died in 1979.